Home | | Medical Microbiology | Functional Integration of the Immune System in Response to Infectious Organisms
Posted On :  30.07.2017 12:54 am

Functional Integration of the Immune System in Response to Infectious Organisms

The innate immune system involves phagocytic cells such as monocytes, macrophages and dendritic cells, and cytokines such as interleukin-1 that are generated following activation of phagocytic cells by binding of bacterial lipopolysaccharide to surface receptors.

FUNCTIONAL INTEGRATION OF THE IMMUNE SYSTEM IN RESPONSE TO INFECTIOUS ORGANISMS

The innate immune system involves phagocytic cells such as monocytes, macrophages and dendritic cells, and cytokines such as interleukin-1 that are generated following activation of phagocytic cells by binding of bacterial lipopolysaccharide to surface receptors. Once the innate system is activated, the cytokines it produces and the peptide antigens presented to T cells serve to activate and condition the response of the specific adaptive system (Fig 8 – 11). The upper half of the figure illustrates how activation of the antigen-presenting cell (monocyte, macrophage, or dendritic cell) can stimulate NK cells, CD8+ cytotoxic T cells, or TH1 type CD4+ cells. The TH1 cells are induced by presentation of peptides de-rived from antigens such as a viral coat protein presented to the α/β T-cell receptor of an unstimulated T cell with the activation and transformation process mediated by IL-12 and IFN-α. Once the TH1 cell is specifically activated, the process can lead to the activation of B cells to make IgM or IgG but, more importantly, to activate macrophages to act in an in-flammatory manner. TH1 type cell-mediated immunity is particularly effective against intra-cellular parasites but has the drawback of increasing the severity of autoimmune diseases. 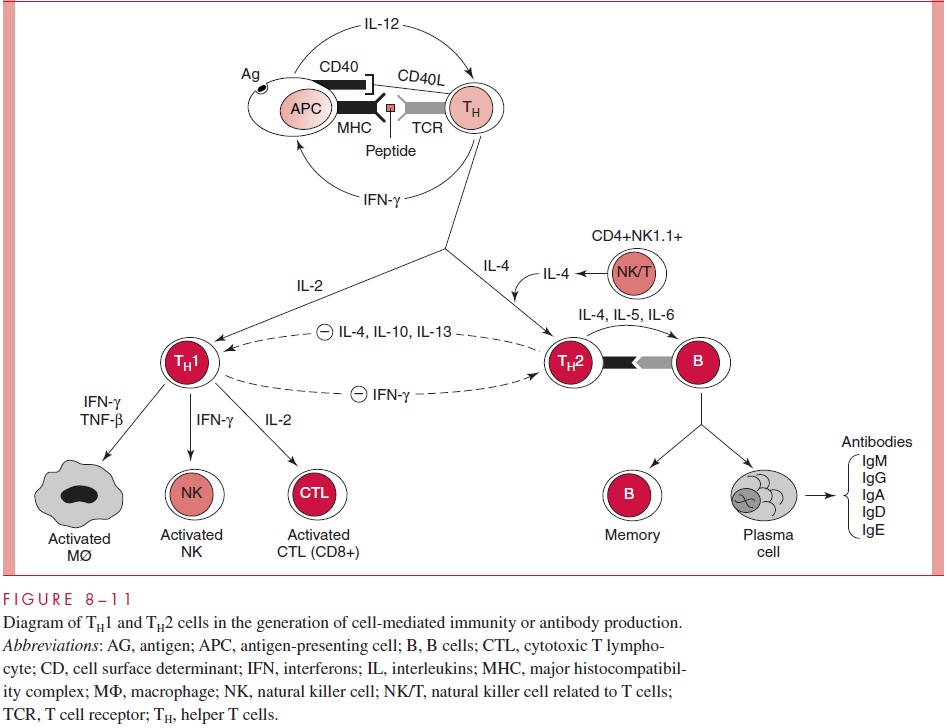 The lower half of (Figure 8 – 11) illustrates the activation of TH2 type helper cells via the mediation of the cytokine IL-6 and the production of IL-4 to drive the differentiation pathway. The specificity for antigen is maintained by presentation of peptide antigen via MHC of the antigen presenting cell to the α/β T-cell receptor of the unstimulated helper T cell. A separate type of NK cell, one that is CD4 and expresses a restricted Tcr V is involved in this process. TH2 type immunity is most prominent in the activation of B cells, allowing the generating of IgM, IgG, IgA, and IgE. Antibodies are valuable in the protective immune response to many bacteria and also in maintaining protection against viruses. Most notably, the TH2 response is host protective in infections by gastrointesti-nal helminth worms such as schistostomes, where production of specific IgE antibody bound to macrophages, basophils, or acinophils appears to confer protection. On the other hand, TH2 type immunity in antibodies appear to offer little protection against retroviruses, including HIV. IgE production to allergens produced by dust mites or rag-weed may lead to serious clinical consequences of allergic responses.

The above scheme depicting the critical role of the polarization of helper T cell type and function in resistance to certain diseases and in the exacerbation of others is not yet completely established.

It has been sufficiently documented to make it a worthwhile over-all conceptual framework in which to place infectious diseases caused by distinct types of pathogens, autoimmune diseases, immunity to tumors, and allergy. The difficulty is that there is no such thing as a pure TH1 or TH2 response; rather, there is a balance between the two types of effector T cells as manifested by levels of cytokines. In the most simple case, bacteria coated with polysaccharides that protect them from ingestion by phagocytes are readily attacked by antibodies. Furthermore, antibodies of the IgM class against these polysaccharides can be generated in the relative absence of T-cell help. Nonetheless, TH2 type cytokines are required for activation and differentiation of the B cells and their differ-entiation into antibody-secreting plasma cells. Recently, it has also been shown that natural antibodies to viruses are protective in experimental infections of mice. S. pneumoniae are extracellular pathogens that enter the lungs and colonize the space in the alveoli, where their multiplication causes tissue damage and inflammation that can impair breathing. Antibodies to these organisms enable them to be phagocytized and also to be killed by ac-tivation of the complement cascade following binding of the antibody. By contrast, Leish-mania is an intracellular parasite that proliferates within macrophages inside vesicles calledendosomes. Thus, the parasites are protected from attack by antibodies. TH1 type immu-nity plays a major role in their destruction because the infected macrophages can break down the organisms into peptides that are then presented by MHC class II molecules to the receptor on CD4+ cells. The T cells then become activated by interaction of the accessory CD28 molecule on the T cell with the B7 molecule on the macrophage. The activated TH1 type cells now secrete cytokines such as IFN- γ that induce the macrophage to produce tumor necrosis factor and nitric oxide that kill the parasites within the cells. Viruses are intracellular parasites that replicate within the nucleus or within the cytoplasm. Both the production of cytotoxic CD8+ T cells and TH1 type inflammation are protective against virus infections. Cytotoxic T cells are induced by the presentation of viral peptides by MHC class I molecules, as opposed to helper cell reactivity, that involves that presentation of antigenic class II MHC.

Leprosy appears to be a human disease for which the elaboration of a TH1 type re-sponse is essential for cure, but the elaboration of TH2 type responses is harmful to the infected person. There are two polar forms of clinical presentation of leprosy. Tuberculoid leprosy is characterized by a strong cell-mediated immune response to the causative or-ganism, Mycobacterium leprae. This cell-mediated TH1 type immune response kills the mycobacteria but at the price of immune-mediated tissue damage to the host. Leproma-tous leprosy, the other extreme of the clinical spectrum, is characterized by a pronounced antibody response in the virtual absence of a cellular response against the bacterial pathogen. This situation results in extensive bacterial loads and ultimately in the death of the patient. Analyses of messenger RNA in lesions of the two types of leprosy indicate that TH1 type cytokines predominate in the tuberculoid form and TH2 cytokines are the major types generated in lepromatous leprosy. In parallel, TH1 immunity is more effective in the response to Mycobacterium tuberculosis than are antibodies.

A vigorous TH2 type response is required for the clearance of infections with gas-trointestinal helminths. There is convincing evidence that TH2 type responses are required for the explusion of gastrointestinal parasites, but the exact mechanisms by which the TH2 type cells mediate the protective responses are unknown. The cytokine IL-4 induces the production of IgG1 (in mice) and IgE, generation of mast cells in the intestinal mucosa, increased contractility of the intestine smooth musculature, and reduced intestinal fluid uptake. IL-5 is induced by infection with intestinal nematodes (roundworms), and this cy-tokine promotes the production and activation of eosinophils. Although the production of IgE and its binding to mast cells and basophils in producing allergic responses is gener-ally considered destructive, recent evidence suggests that important eosinophils and these allergy-type reactions may be mediating immunity against extraintestinal helminth larvae, including those of schistomes (parasitic flatworms).

A recently developed approach has the potential to allow the use of antibodies as antigen surrogates in immunization. Antibodies are themselves antigenic in animal species to which they are foreign. The antiantibodies that can be produced include some with specificity for unique epitope-reacting portions of the Fab variable region of the antibody against which they are directed as well as for epitope-recognizing sites on immunoresponsive B cells. These are termed anti-idiotypic antibodies and have the same three-dimensional geometry as would the epitope molecule. Monoclonal antibodies that have this structure can be se-lected and produced in large amounts and may then act as antigens for the production of specific antibodies against the epitope of interest. Immunization with such anti-idiotype an-tibodies has promise for producing specific immunity against critical antigens that are im-possible or uneconomical to produce in bulk. At present, there are many problems to over-come before such procedures could begin to be applied to humans.