As on a finite scale, the deformation tensor can be 'dissolved' into its sym-metric and asymmetric components:

As on a finite scale, the deformation tensor can be 'dissolved' into its sym-metric and asymmetric components: 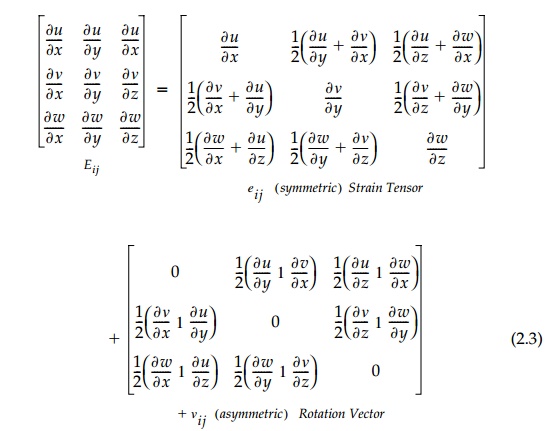 each of which produces a 'deformation' of the orthogonal differential baselengths dx, dy, and dz, exactly like its counterpart in the symmetric dis-placement tensor dij with respect to finite base lengths x, y, and z when u, v, and w are linear functions. Physically, the diagonal terms are unfortunate original definition (by Navier and Cauchy in 1821) of shear ? as the sum of counteracting angle changes rather than their average is historically significant in that much of the important literature has used it. 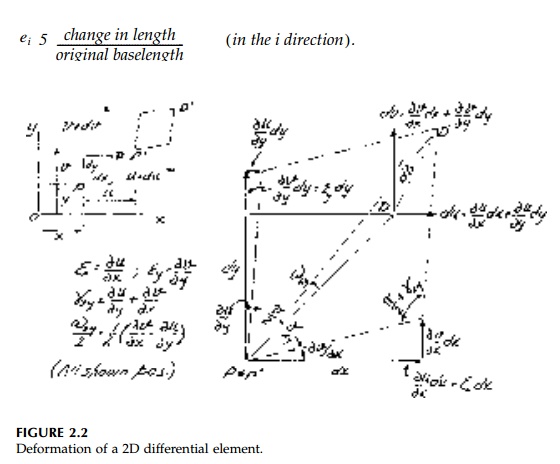 The off-diagonal terms, ? ij = total counteracting angle change between othogonal baselengths (in the i and j directions) and are positive when they increase d? (Bar).

The same symbol is even used for the rotation of the differential element where the vector components of ?ij are defined as:

positive by the 'right-hand-screw-rule' as in Chapter 1 for finite baselengths. A complete drawing of the deformation of a 3D differential element showing each vector component of strain and rotation adding to give the total deriva-tive is complicated.* The 2D (in-plane) drawing, Figure 2.2, illustrating the basic definitions for ?x, ?y, ?xy, and ?xy is more easily understood.

Generally at this point in the development of the 'theory of elasticity,' at least in its basic form, these elastic rotations as defined by Equation (2.5) are termed 'rigid body' and thereafter dismissed. This is a conceptual mistake and we will not disregard the rotational component of Eij.

Equation (2.4) represents 6 field equations relating the displacement vec-tor field with 3 unknown components to the strain-tensor field with 6 unknown components. With the rotation field we have 3 more equations and unknowns. Since 9 deformation components are defined in terms of 3 displacements, the strains and rotations cannot be taken arbitrarily, but must be related by the so-called compatibility relationships usually given in the form: 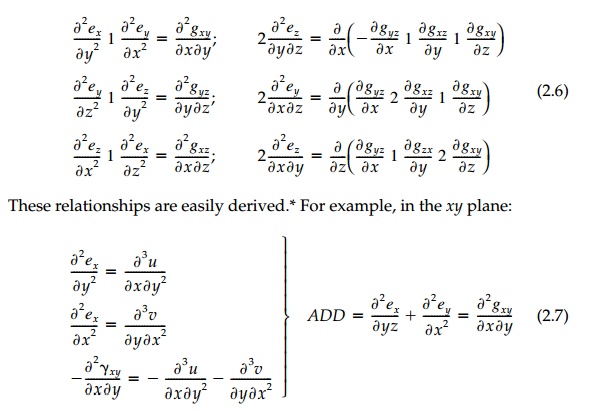 and the same procedure used in deriving Equation (2.7):

While these nine compatibility equations are sufficient to ensure that dis-placement functions u, v, and w will be smooth and continuous, they are never sufficient in themselves to solve for displacements. Thus all structures are 'geometrically indeterminate' and we must investigate the stress field describing the flow of forces from the boundary to the supports in order to develop additional equations to work with. The tacit 'assumption' of Hooke's law validated over years of observation, is that the deformation field (strains and rotations) are caused by stresses (or vice versa) and the two can be related by material properties determined in the laboratory.