Mohr's Circle for a Plane Tensor

A complete graphical representation of any symmetric 2D tensor (stress, strain, inertia, etc.) in all orientations simultaneously is given by Mohr's Circle.

Mohr's Circle for a Plane Tensor

A complete graphical representation of any symmetric 2D tensor (stress, strain, inertia, etc.) in all orientations simultaneously is given by Mohr's Circle. This construction, therefore, provides an invaluable tool for visualizing all the equations derived in the previous section* and, when plotted accurately, can be used to obtain values for engineering computations. Mohr's Circle is also very useful in describing yield behavior, slip surfaces, strain hardening, and failure in plasticity. Thus, it is extremely important in engineering mechanics that Mohr 's Circle be mastered in all its nuances and totally understood. In this and the next section, Mohr's Circle will be presented in terms of stress, knowing the results can be translated immediately to any other tensor quantity by analogy.

For the two-dimensional case, Mohr's Circle can be plotted from the values of the components of the planar tensor in any orientation as shown in Figure 2.7. This construction should be thought of as a mapping of the normal and shear components on any face to a point in stress space (the ?-? plane) where:

1.  ? is positive in tension and is plotted to the right of the origin; compression is negative to the left.

2.  ? is plotted positively if it rotates the stress-block clockwise. Thus, positive ?xy is plotted downward for the x face and upward for the y face even though 'in real life' they have the same sign.

3.  Angles  from one axis to another around the origin are in the same direction but twice those 'in real life.'

Thus any orthogonal set of axes are 180o to one another on Mohr's Circle and therefore a diameter of the circle. With these mapping rules, the circle is a direct representation of Equation (2.34) for 2D coordinate transformation in terms of double angles.

Every possible orientation of ?ij is represented by some diameter of the circle. Of particular interest are, first, the principal 1-2 orientation when ? 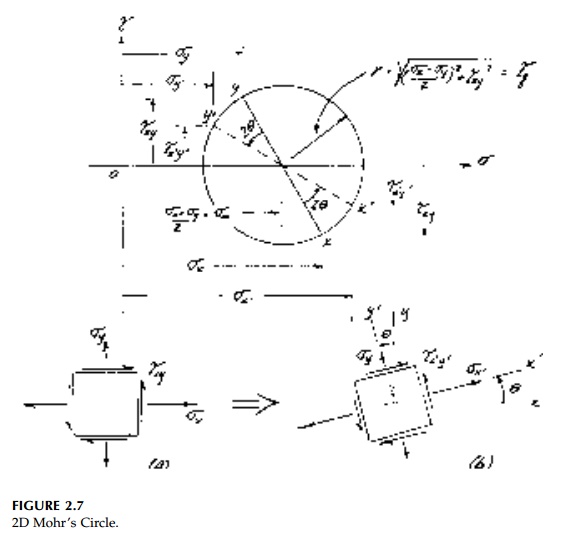 By providing a graphic (geometric) picture of a 2D tensor at a point in all orientations simultaneously, Mohr's Circle is the ultimate representation of a 2D tensor. It is far superior to a matrix or block representation, which can only depict one array of vector components. Moreover, as the center of Mohr's Circle and the radius, the invariants are self-evident. So, too, is the separation into isotropic and deviatoric components shown in Figure 2.9. The two effects are unlinked graphically just as they are physically. Changes in the isotropic stress ?m (causing isotropic strain Em and pure volume change) simply moves the center of Mohr's Circle as a point back and forth along the ? axis without affecting the circle itself. It is the deviatoric component (pure shear causing 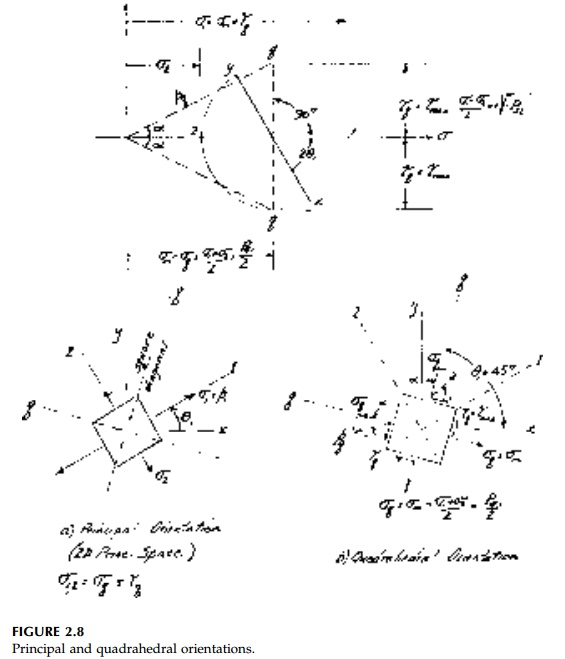 only distortion) which, as it increases, makes the point grow into larger and larger circles and establishes the orientation of the tensor.*

The limit to how far the center of Mohr's Circle can move to the right in iso-tropic tension or left in isotropic (hydrostatic) compression, or how large the 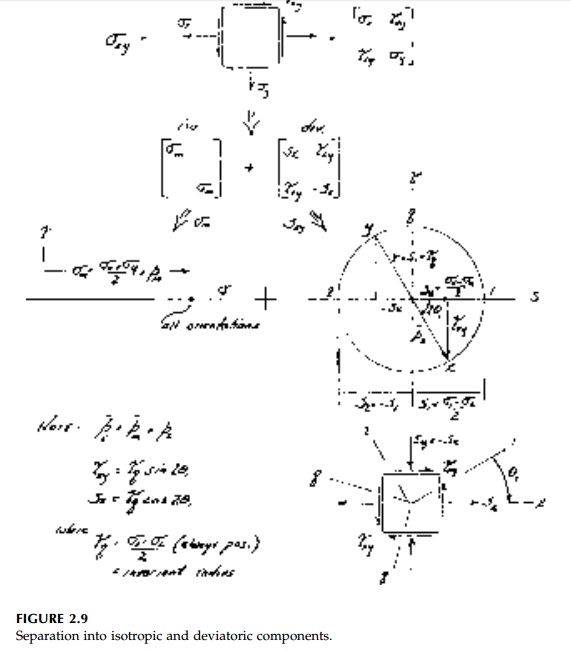 circle can grow before the onset of serious nonlinearity depend on the strength of the material in which the stress or strain (at the point) exists.* These mate-rial properties (isotropic and deviatoric 'strength' and associated flow rules), which will be introduced in the next chapter, are also best visualized in terms of Mohr's Circle and, in fact, led Mohr to develop his construction in the first place.