The Neuroscience of Vision 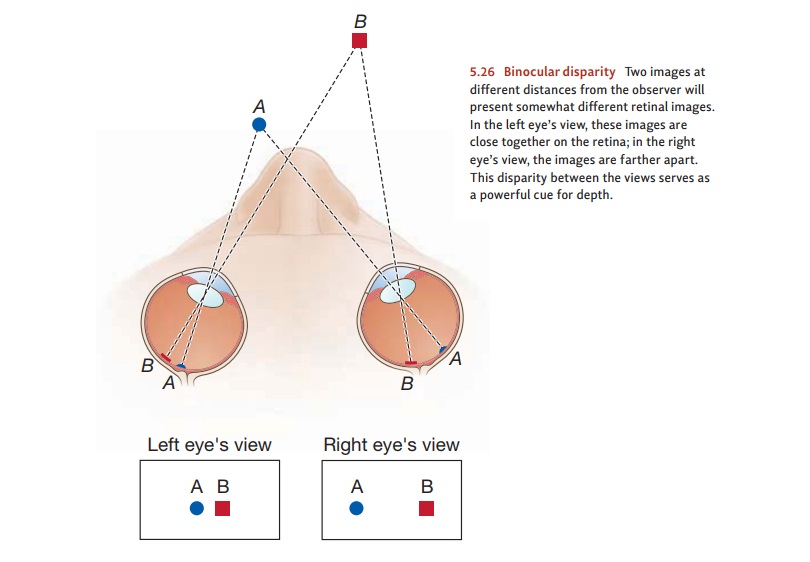 The Visual Pathway • The Binding Problem

THE NEUROSCIENCE OF VISION

Where are we so far? We started by acknowledging the complexities of form perception— including the perceiver’s need to interpret and organize visual information. We then con-sidered how this interpretation might be achieved—through a network of detectors, shaped by an interplay between bottom-up and top-down processes. But these points simply invite the next question: How does the nervous system implement these processes? More broadly, what events in the eye, the optic nerve, and the brain make perception possible?

As we saw, the rods and cones pass their signals to the bipolar cells, which relay them to the ganglion cells (Figure 4.26). The axons of the ganglion cells form the optic nerve, which leaves the eyeball and begins the journey toward the brain. But even at this early stage, the neurons are specialized in important ways, and different cells are responsible for detecting different aspects of the visual world. 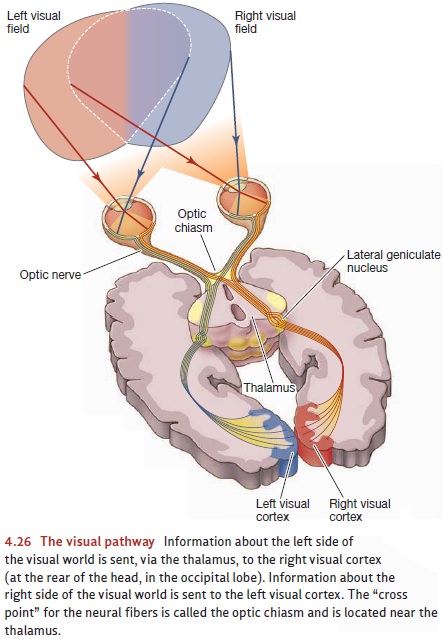 The ganglion cells, for example, can be broadly classified into two categories: the smaller ones are called parvo cells, and the larger are called magno cells (parvo and magno are the Latin for “small” and “large”). Parvo cells, which blanket the entireretina, far outnumber magno cells. Magno cells, in contrast, are found largely in the retina’s periphery. Parvo cells appear to be sensitive to color differences (to be more pre-cise, to differences either in hue or in brightness), and they probably play a crucial role in our perception of pattern and form. Magno cells, on the other hand, are insensitive to hue differences but respond strongly to changes in brightness; they play a central role in the detection of motion and the perception of depth.

This pattern of neural specialization continues and sharpens as we look more deeply into the nervous system. The relevant evidence comes largely from the single-cell recording technique that lets investigators determine which specific stimuli elicit a response from a cell and which do not . This technique has allowed investigators to explore the visual system cell by cell and has given us a rich understand-ing of the neural basis for vision.

PARALLEL PROCESSING IN THE VISUAL CORTEX

This abundance of cell types suggests that the visual system relies on a “divide-and-conquer” strategy. Different cells—and even different areas of the brain—each specialize in a particular kind of analysis. Moreover, these different analyses go on in parallel: The cells analyzing the forms do their work at the same time that other cells are analyzing the motion and still others the colors. Using single-cell recording, investigators have been able to map where these various cells are located in the visual cortex as well as how they communicate with each other; Figure 5.18 shows one of these maps. 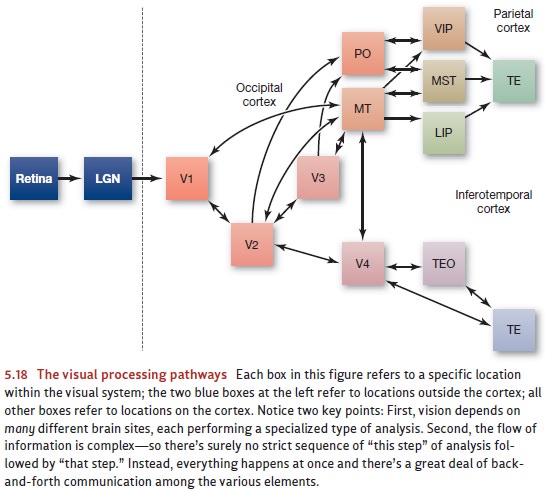 Why this reliance on parallel processing? For one thing, parallel processing allows greater speed, since (for example) brain areas trying to recognize the shape of the stimulus aren’t kept waiting while other brain areas complete the motion analysis or the color analysis. Instead, all types of analysis can take place simultaneously. Another advantage of parallel processing lies in its ability to allow each system to draw informa-tion from the others. Thus, your understanding of an object’s shape can be sharpened by a consideration of how the object is moving; your understanding of its movement can be sharpened by noting what the shape is (especially the shape in three dimen-sions). This sort of mutual influence is easy to arrange if the various types of analysis are all going on at the same time (Van Essen & DeYoe, 1995).

The parallel processing we see in the visual cortex also clarifies a point we’ve already discussed. Earlier, we argued that the inventory of a figure’s features depends on how the perceiver organizes the figure. So, in Figure 5.4, the features of the letters were absent with one interpretation of the shapes, but they’re easily visible with a different interpretation. In Figure 5.5, some of the features (the triangle’s sides) aren’t present in the figure but seem to be created by the way we interpret the arrangement of features. Observations like these make it sound like the interpretation has priority because it determines what features are present.

How can both of these claims be true—with the features depending on the interpreta-tion and the interpretation depending on the features? The answer involves parallel pro-cessing. Certain brain areas are sensitive to the input’s features, and the cells in these areas do their work at the same time that other brain areas are analyzing the larger-scale config-uration. These two types of analysis, operating in parallel, can then interact with each other, ensuring that our perception makes sense at both the large-scale and fine-grained levels.

Evidence for specialized neural processes, all operating in parallel, continues as we move beyond the visual cortex. As Figure 5.19 indicates, information from the visual cortex is transmitted to two other important brain areas in the inferotemporal cortex (the lower part of the temporal cortex) and the parietal cortex. The pathway carrying information to the temporal cortex is often called the “what” system; it plays a major role in the identification of visual objects, telling us whether the object is a cat, an apple, or whatever. The second pathway, which carries information to the parietal cortex, is often called the “where” system; it tells us where an object is located— above or below, to our right or left (Ungerleider & Haxby, 1994; Ungerleider & Mishkin, 1982). 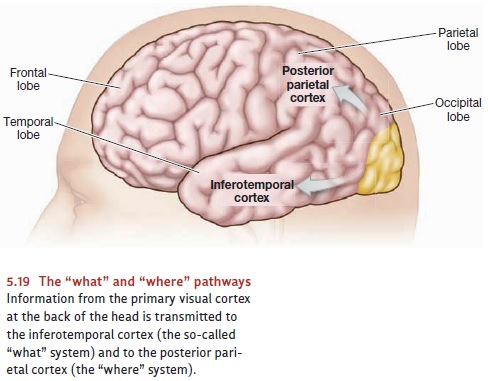 There’s been some controversy, however, over how exactly we should think about these two systems. Some theorists, for example, propose that the path to the parietal cortex isn’t concerned with the conscious perception of position. Instead, it’s primarily involved in the unnoticed, automatic registration of spatial location that allows us to control our movements as we reach for or walk toward objects in our visual world. Likewise, this view proposes that the pathway to the temporal cortex isn’t really a “what” system; instead, it’s associated with our conscious sense of the world around us, including our conscious recognition of objects and our assessment of what these objects look like (e.g., Goodale & Milner, 2004; also D. Carey, 2001; Sereno & Maunsell, 1998).

No matter how this debate is settled, there can be no question that these two path-ways serve very different functions. Patients who have suffered lesions in the occipi-tal-temporal pathway—most people agree this is the “what” pathway—show visual agnosia . They may be unable to recognize common objects, such as a cup or a pencil. They’re often unable to recognize the faces of relatives and friends— but if the relatives speak, the patients can recognize them by their voices. At the same time, these patients show little disorder in visual orientation and reaching. On the other hand, patients who have suffered lesions in the occipital-parietal pathway— usually understood as the “where” pathway—show the reverse pattern. They have difficulty in reaching for objects but no problem with identifying them (A. Damasio, Tranel, & H. Damasio, 1989; Farah, 1990; Goodale, 1995; Newcombe, Ratcliff, & Damasio, 1987).

It’s clear, then, that natural selection has favored a division-of-labor strategy for vision: The processes of perception are made possible by an intricate network of subsystems, each specialized for a particular task and all working together to create the final product—an organized and coherent perception of the world.

We’ve seen the benefits of this design, but the division-of-labor setup also creates a problem for the visual system. If the different aspects of vision—the perception of shape, color, movement, and distance—are carried out by different processing mod-ules, then how do we manage to recombine these pieces of information into one whole? For example, when we see a ballet dancer in a graceful leap, the leap itself is registered by the magno cells; the recognition of the ballet dancer depends on parvo cells. How are these pieces put back together? Likewise, when we reach for a coffee cup but stop midway because we see that the cup is empty, the reach itself is guided by the occipital-parietal system (the “where” system); the fact that the cup is empty is perceived by the occipital-temporal system (the “what” system). How are these two streams of process-ing coordinated?

We can examine the same issue in light of our subjective impression of the world around us. Our impression, of course, is that we perceive a cohesive and organized world. After all, we don’t perceive big and blue and distant; we instead perceive sky. We don’t perceive brown and large shape on top of four shapes and moving; instead, we perceive our pet dog running along. Somehow, therefore, we do manage to re-integrate the separate pieces of visual information. How do we achieve this reunification? Neuroscientists call this the binding problem—how the nervous system manages to bind together elements that were initially detected by separate systems.

We’re just beginning to understand how the nervous system solves the binding problem. But evidence is accumulating that the brain uses a pattern of neuralsynchrony—different groups of neurons firing in synchrony with each other—toidentify which sensory elements belong with which. Specifically, imagine two groups of neurons in the visual cortex. One group of neurons fires maximally whenever a vertical line is in view. Another group of neurons fires maximally whenever a stimulus is in view moving from left to right. Also imagine that, right now, a vertical line is presented, and it is moving to the right. As a result, both groups of neurons are firing rapidly. But how does the brain encode the fact that these attributes are bound together, different aspects of a single object? How does the brain differentiate between this stimulus and one in which the features being detected actually belong to different objects—perhaps a static vertical and a moving diagonal?

The answer lies in the timing of the firing by these two groups of neurons. We emphasized the firing rates of various neurons—whether a neuron was firing at, say, 100 spikes per second or 10. But we also need to consider exactly when a neuron is firing, and whether, in particular, it is firing at the same moment as other neurons. When the neurons are synchronized, this seems to be the nervous system’s indication that the messages from the synchronized neurons are in fact bound together. To return to our example, if the neurons detecting a vertical line are firing in synchrony with the neurons signaling movement—like a group of drummers all keep-ing the same beat—then these attributes, vertical and moving, are registered as belong-ing to the same object. If the neurons are not firing in synchrony, the features are registered as belonging to separate objects (Buzsáki & Draguhn, 2004; Csibra, Davis, Spratling, & Johnson, 2000; M. Elliott & Müller, 2000; Fries, Reynolds, Rorie, & Desimone, 2001; Gregoriou, Gotts, Zhou, & Desimone, 2009).