Distance Perception: Where Is It? 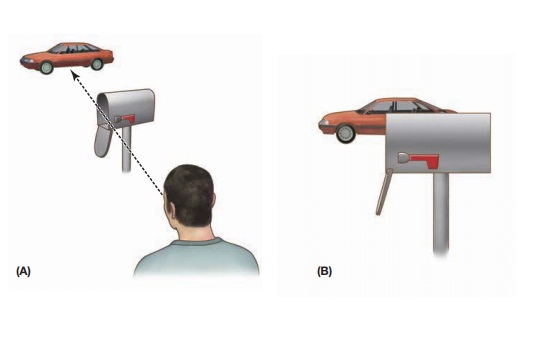 DISTANCE PERCEPTION :WHERE IS IT ?

So far, we’ve emphasized how you recognize the objects you encounter. This focus has led us to consider how you manage to perceive forms as well as how you cope with variations in viewing circumstances in order to perceive an object’s shape and size correctly. And once again, this discussion leads to a new question: To perceive what something is, you need to achieve constancy. But, to achieve constancy, you need to perceive where something is—how far it is from you (so that you can achieve size constancy) and how it is angled relative to your line of view (so that you can achieve shape constancy).

How, therefore, do you manage to perceive a three-dimensional world, judging which objects are close and which are far? The answer centers on depth cues—features of the stimulus that indicate an object’s position. What are these cues?

One important cue for distance comes from the fact that our two eyes look out onto the world from slightly different positions; as a result, each eye has a slightly different view. This difference between the two eyes’ views is called binocular disparity, and it gives us important information about distance relationships in the world (Figure 5.26). 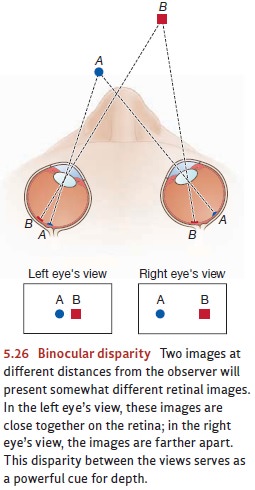 Binocular disparity can induce the perception of depth even when no other distance cues are present. For example, the bottom panels of Figure 5.26 show the views that each eye would receive while looking at a pair of nearby objects. If we present each of these views to the appropriate eye (e.g., by drawing the views on two cards and placing one card in front of each eye), we can obtain a striking impression of depth.

Disparity was the principle behind the stereoscope, a device popular in the 19th century (Figure 5.27), which presented a slightly different photograph to each eye and so created a vivid sense of depth. The same principle is used in 3-D movies, in which two different movies—presenting two slightly different views of each scene—are projected simultaneously onto the theatre’s screen. For these movies, viewers wear special glasses to ensure that their left eye sees one of the movies and their right eye sees the other. In this way, each eye gets the appropriate input and creates the binocular disparity that in turn produces a compelling perception of depth.

Binocular disparity has a powerful effect on the way we perceive depth. But we can also perceive depth with one eye closed; so, clearly, there must be cues for depth that depend only on what each eye sees by itself. These are the monocular depth cues.

One of the monocular depth cues depends on the adjustment that the eye must make to see the world clearly. Specifically, we’ve already mentioned that in each eye, muscles adjust the shape of the lens to produce a sharply focused image on the retina. The amount of adjustment depends on how far away the viewed object is—there’s a lot of adjustment for nearby objects, less for those a few steps away, and virtually no adjustment at all for objects more than a few meters away. It turns out that perceivers are sensitive to the amount of adjustment and use it as a cue indicating how far away the object is.

Another set of monocular cues have been exploited for centuries by artists to create an impression of depth on a flat surface—that is, within a picture—which is why these cues are often called pictorial cues. In each case, these cues rely on straightfor-ward principles of physics. For example, imagine a situation in which a man is trying to admire a sports car, but a mailbox is in the way (Figure 5.28A). In this case, the mailbox will inevitably block the view simply because light can’t travel through an opaque object. This fact about the physical world provides a cue we can use in judging distance. The cue is known as interposition (Figure 5.28B)—the blocking of our view of one object by some other object. In this example, interposition tells the man that the mailbox is closer than the car. 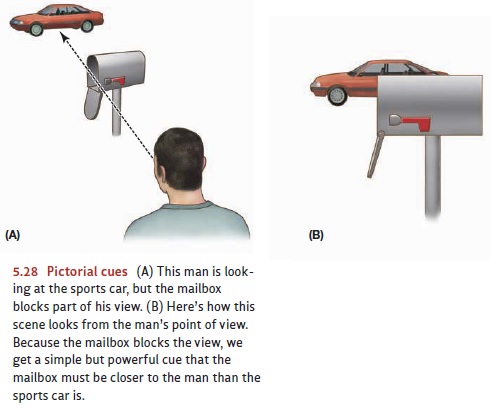 In the same way, distant objects necessarily produce a smaller retinal image than do nearby objects of the same size; this is a fact about optics. But this physical fact again gives us perceptual information we can use. In particular, it’s the basis for the cue of linear perspective, the name for the pattern in which parallellines seem to converge as they get farther and farther from the viewer (Figure 5.29). 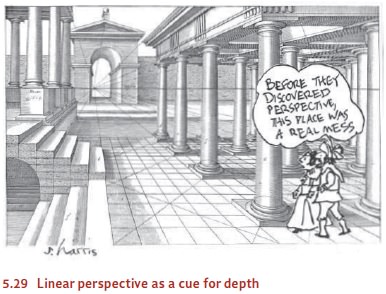 One more pictorial cue is provided by texture gradients. Consider what meets the eye when we look at cobblestones on a street or pat-terns of sand on a beach. The retinal projection of the sand or the cobblestones shows a pattern of continuous change in which the elements of the texture grow smaller and smaller as they become more distant. This pattern of change by itself can reveal the spatial layout of the relevant surfaces (Figure 5.30). If these textures also have discontinuities, they can tell us even more about how the sur-faces are laid out (Figure 5.31; Gibson, 1950, 1966). 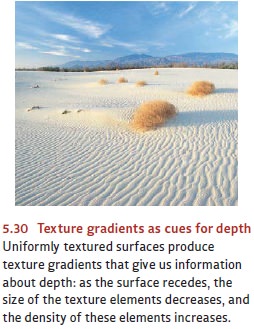 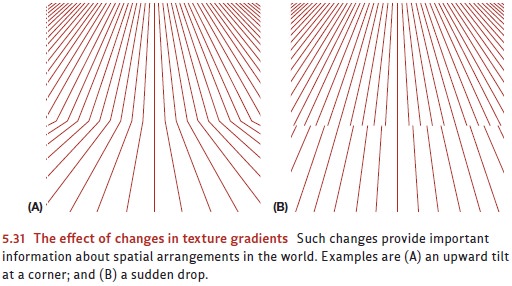 The Perception of Depth through Motion

Whenever you move your head, the images projected by the objects in your world necessarily move across your retinas. For reasons of geometry, the projected images of nearby objects move more than those of distant ones; this pattern of motion in the retinal images gives us yet another distance cue, called motion parallax (Helmholtz, 1909).

A different motion cue is produced when we move toward or away from objects. As we approach an object, its image gets larger and larger; as we move away, it gets smaller. The pattern of stimulation across the entire visual field also changes as we move toward an object, resulting in a pattern of change in the retinal stimulation that’s called opticflow. This flow gives us crucial information about depth and plays a large role in thecoordination of our movements (Gibson, 1950, 1979).

The Role of Redundancy

You might think that the various distance cues all end up providing the same information—each one tells us which objects are close by and which are far. On that basis, it might be efficient for the visual system to focus on just one or two cues and ignore the others. The fact is, however, that we make use of all these cues as well as several others we haven’t described (e.g., Figure 5.32). 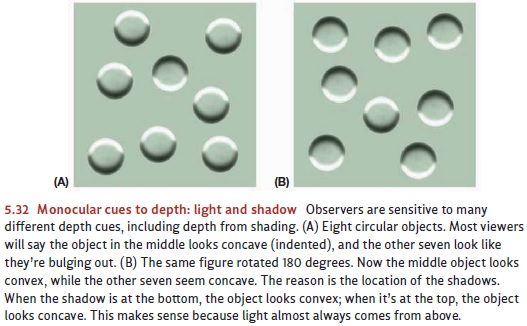 Why did natural selection favor a system influenced by so many cues, especially since these cues often provide redundant information? It’s because different distance cues become important in different circumstances. For example, binocular disparity is a powerful cue, but it’s informative only when objects are relatively close by. (For targets farther than 30 feet away, the two eyes receive virtually the same image.) Likewise, motion parallax tells us a great deal about the spatial layout of our world, but only if we’re moving. Texture gradients are informative only if there’s a suitably uniform texture in view. So while these various cues are often redundant, each type of cue can give us information when the others cannot. By being sensitive to them all, we’re able to judge distance in nearly any situation we encounter.