Form Perception: What Is It?: The Importance of Organization

It seems, then, that we’ll need a great number of feature lists (due to the sheer number of objects we can recognize).

The Importance of Organization

It seems, then, that we’ll need a great number of feature lists (due to the sheer number of objects we can recognize). We’ll also need flexibility in how we use the feature lists (to address the diversity of views we get of each object, and the problem of partial views). But there’s still another problem for us to confront: It turns out that the catalog of features we rely on—and so the starting point for our recognition of objects in the world—depends on how we interpret the visual input.

This role for interpretation can be demonstrated in several ways. One is that we choose to ignore many of the features available to our visual system, basing our recog-nition only on a subset of the features that are actually in view. To make this idea con-crete, consider Figure 5.3. The pattern in the man’s shirt contains many lines and angles, but we give them little priority when analyzing the scene. Instead, we focus on the features defining the outline of the man’s body and telling us that this is, in fact, a picture of a man wearing sunglasses. Likewise, we ignore the outline of the shadows cast by the trees because we realize that the features making up this outline don’t tell us much about the identity of the objects in the picture. It seems, then, that we somehow choose which features “matter” for our recognition and which features are incidental. 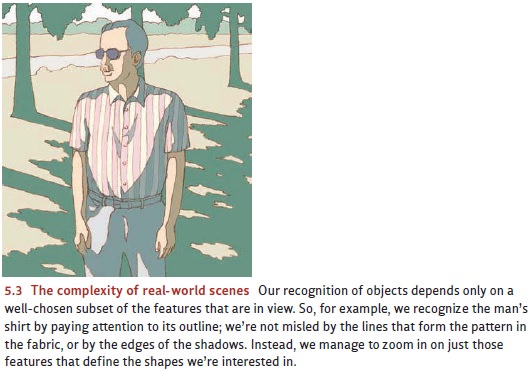 Figure 5.4 illustrates a different type of interpretation. These dark shapes seem meaningless at first, but after a moment most people find a way to reorganize the fig-ure so that the familiar letters come into view. But let’s be clear about what this means. At the start, the form doesn’t seem to contain the features we need to identify the L , the I, and so on—and so we don’t detect these letters. Once we’ve reorganized the form,though, it does contain the relevant features and so we immediately recognize the let-ters. Apparently, therefore, the catalog of features present in this figure depends on how we interpret its overall form. Based on one interpretation, the features defining these letters are absent—and so we can’t detect the letters or the word LIFT. With a different interpretation, the features are easily visible and we can immediately read the word. It seems, then, that features are as much “in the eye of the beholder” as they are in the figure itself.

As a related example, consider Figure 5.5. Here, most people easily perceive two com-plete triangles—one on the orange background, one on the green. But again, the fea-tures of these triangles aren’t present; specifically, the sides of the triangle aren’t marked in the figure at all. However, the perceiver organizes the overall form so that the missing sides are filled in—she’s essentially creating the features for herself. Once that’s done, she can clearly perceive the triangles.

The previous examples powerfully suggest that the perception of form depends both on feature input—that is, what’s actually in front of your eyes—and on how you organize and interpret the form. But what exactly does it mean for a perceiver to “interpret” a form, or to find an “organization” within a figure? And why do you end up with one interpretation and not another? Why, for example, do most people decide that Figure 5.5 should be organized in a way that connects the angles so that they become parts of a single form rather than treating them as separate forms?

Questions like these were crucial for Gestalt psychology, a school of psychology that emphasized that organization is an essential feature of all mental activity: We under-stand the elements of the visual input as linked to each other in a certain way, and the identity of these elements depends on the linkage. (That’s why in Figure 5.5, we perceive the round elements as intact circles, each partially hidden by another form, rather than as a series of “Pac-Man” figures.) Likewise, we appreciate a work of music because we perceive the individual notes as forming a cohesive whole. Similarly, our thoughts have meaning only in relationship to each other. In all cases, the Gestalt psychologists wanted to ask how this organization was achieved, and how it influenced us. (The word Gestalt is derived from a German word meaning “form” or “appearance.”)

Gestalt psychologists described several aspects of this organization and identified several principles that guided it. Some of the principles are concerned with the way you parse the input—that is, how you separate a scene into individual objects, linkingtogether the parts of each object but not linking one object’s parts to some other object. To make this idea concrete, consider the still life in Figure 5.6. To make sense of this pic-ture, your perception must somehow group the elements of the scene appropriately. 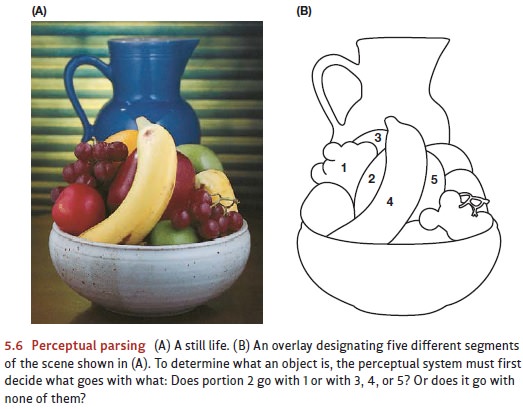 Portion 2 (part of the apple) must be united with portion 5 (more of the apple), even though they’re separated by portion 4 (a banana). Portion 2 should not be united with portion 1 (a bunch of grapes), even though they’re adjacent and about the same color. The bit of the apple hidden from view by the banana must somehow be filled in, so that you perceive an intact apple rather than two apple slices. All of these steps involved in deciding which bits go with which other bits fall under the label of parsing.

What cues guide you toward parsing a stimulus pattern one way rather than another? The answer involves both feature information and information about the larger-scale pattern. For example, we tend to interpret certain features (such as a T-junction—Figure 5.7) as indicating that one edge has disappeared behind another; we interpret other features differently. In this way, “local” informa-tion—information contained in one small part of the scene—helps

guide our parsing. But “global” information—information about the whole scene—is also crucial. For example, perceivers tend to group things together according to a principle of similarity—meaning that, all other things being equal, they group together figures that 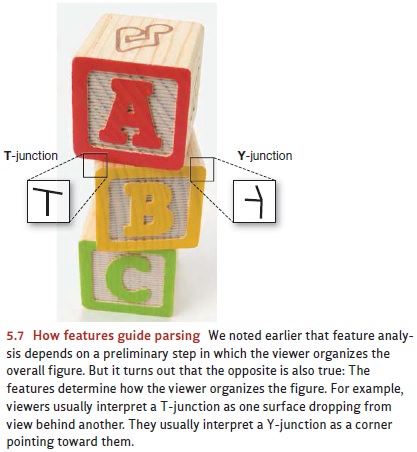 resemble each other. So in Figure 5.8A, we group blue dots with blue dots, red with red. Perceivers are also influenced by proximity—the closer two figures are to each other, the more we tend to group them together perceptually (for more on these principles of perceptual organization, see Figure 5.8; Palmer, 2002; Wertheimer, 1923).

Parsing is also guided by several other principles, including good continuation— a preference for organizations in which contours continue smoothly along their orig-inal course. This helps us understand why portions 2 and 5 in Figure 5.6 are grouped together as parts of a single object; but good continuation can also be documented in much simpler stimuli (Figure 5.8C). Good continuation is also relevant to Figure 5.5. Some theorists interpret the subjective contours visible in this figure as a spe-cial case of good continuation. In their view, the contour is seen to continue along its original path—even, if necessary, jumping a gap or two to achieve this continuation (Kellman & Shipley, 1991; Kellman, Garrigan, & Shipley, 2005).

Another part of visual organization is the separation of the object from its setting, so that the object is seen as a coherent whole, separate from its background. This sepa-ration of figure and ground allows you to focus on just the banana in Figure 5.6, treating everything else in the scene as merely the backdrop for the banana. But the separation of figure and ground is just as important with simpler and entirely unfamil-iar figures. In Figure 5.9A, the white splotch appears to most people as the figure and is 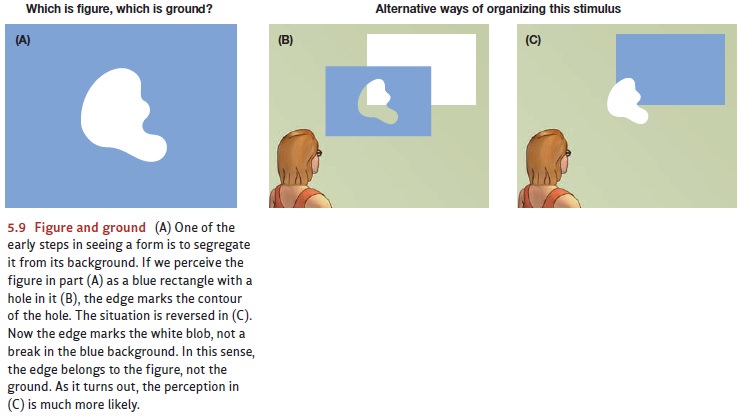 Of course, you can usually identify a figure so quickly and easily that it feels like this specification is somehow specified by the stimulus itself and is not an element of your interpretation. But the fact remains that identifying the figure, like all aspects of per-ceptual organization, is up to you. This is most evident whenever you realize there’s more than one way to interpret a given stimulus—as in Figure 5.10, which can be seen either as a white vase or as two blue faces in profile. This reversible figure makes it clear that the stimulus itself is neutral in its organization. What is figure and what is ground, it seems, depends on how we look at it. 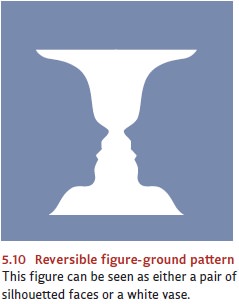 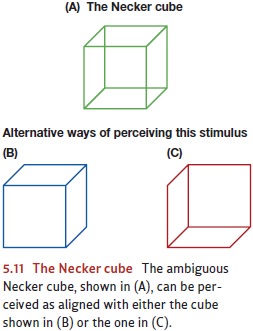 Other examples point to the same broad conclusion and highlight the perceiver’s active role in interpreting the input. Is Figure 5.11A—the Necker cube—aligned with the solid cube shown in Figure 5.11B, so we’re viewing it from above? Or is it aligned with the cube shown in Figure 5.11C, so we’re viewing it from below? Most people can organize the Necker cube in either way, so they first perceive it to have one orientation and then the other. Apparently, then, the organization is not specified by the figure itself but is instead up to the perceiver.

All of these observations suggest that perception is less “objective” than one might suppose, because what we perceive is, it seems, often determined by how we interpret or organize the input. At the same time, it’s important to realize that perceivers’ infer-ences and interpretations tend to be neither foolish nor random. Quite the contrary: Our interpretations of the sensory input are, first of all, shaped by our experience; and they’re correct far more often than not (Enns, 2004). Likewise, the interpretations themselves tend to be quite logical, as if our visual system always follows certain rules. We’ve already mentioned some of these rules—a preference for grouping similar things together, for example, or a preference for parsing the input so that it creates smooth contours. But other rules also guide us: For example, we seem to prefer per-ceptual interpretations that explain all the information contained within the stimu-lus, and so we avoid interpretations that would explain only bits and pieces of the stimulus. We also seem to avoid interpretations that would involve some contradic-tion, such as perceiving a surface to be both opaque and transparent. What’s more, we seem to avoid interpretations that depend on accident or coincidence. (“This is what the form would look like if viewed from exactly the right position.”) Of course, no one claims that the perceptual apparatus is literally proceeding through a sequence of log-ical steps, weighing each of these rules in turn. Still, our perception does seem guided by these principles, so that our interpretations of the input will be logical and usually correct (Figure 5.12). 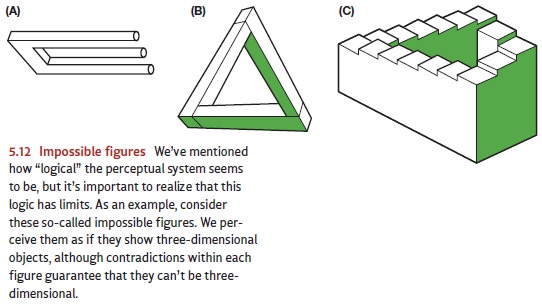