The nervous tissue consists of nerve cells and glial cells which originate from the ectoderm (the latter are supporting and covering cells).

The nervous tissue consists of nerve cells and glial cells which originate from the ectoderm (the latter are supporting and covering cells). Blood vessels and meninges do not belong to the nervous tissue; they are of mesodermal origin. The nerve cell (gan-glion cell or neuron) is the functional unitof the nervous system. In its mature state, it is no longer able to divide, thus making pro-liferation and the replacement of old cells impossible. Very few nerve cells are formed after birth.

A neuron consists of the cell body, the peri-karyon (A1), the processes, dendrites (A2),and one main process, the axon or neurite (A – D3).

The perikaryon is the trophic center of the cell, and processes that become separated from it degenerate. It contains the cell nu-cleus (A4) with a large, chromatin-rich nucleolus (A5) to which the Barr body (sexchromatin) (A6) is attached in females. 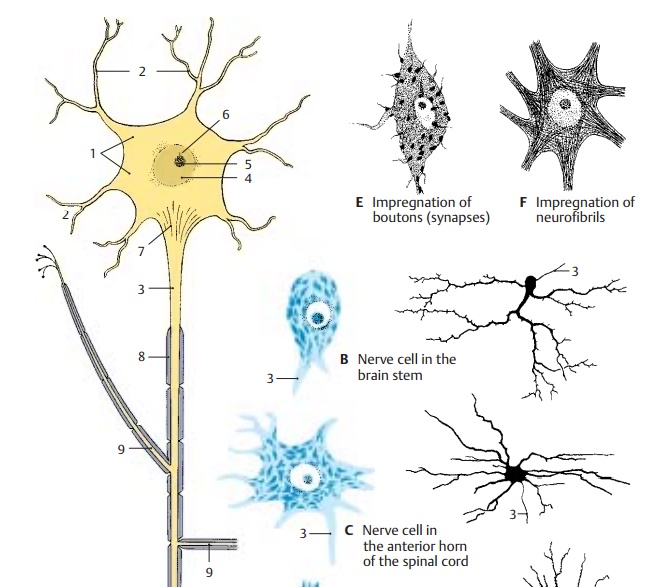 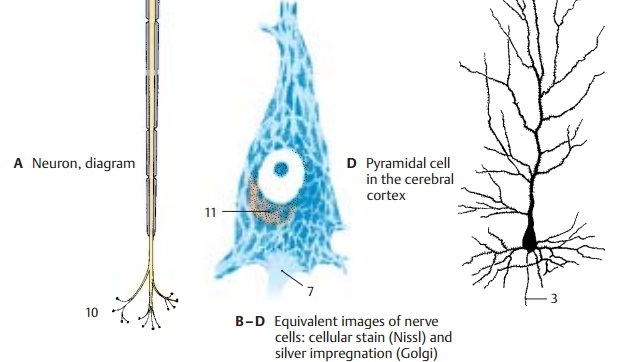 The axon conducts the nerve impulse and begins with the axon hillock (AD7), the site where nerve impulses are generated. At a cer-tain distance from the perikaryon (initialsegment) it becomes covered by themyelinsheath (A8), which consists of a lipid-con-taining substance (myelin). The axon gives off branches (axon collaterals) (A9) and fi-nally ramifies in the terminal area (A10) to end with small end-feet (axon terminals, or boutons) on nerve cells or muscle cells. Thebouton forms a synapse with the surface membrane of the next cell in line; it is here that impulse transmission to the other cell takes place.

Depending on the number of processes, we distinguish between unipolar, bipolar, or multipolar neurons. Most neurons are multi-polar. Some have short axons (interneurons), others have axons more than 1 m long (pro-jection neurons).

A neuron cannot be visualized in its entirety by applying just one staining method. The different methods yield only partial images of neurons. The cellular stain (Nissl’smethod) shows nucleus and perikaryon (B – D). The latter, including the bases of the dendrites, is filled with clumps (Nissl sub-stance, tigroid bodies) and may contain pig-ments (melanin, lipofuscin) (D11). The axon hillock is free of Nissl bodies. The Nissl sub-stance is the light-microscopic equivalent of a well-developed rough endoplasmatic reti-culum. Motor neurons possess a large peri-karyon with coarse Nissl bodies, while sensory neurons are smaller and often con-tain only Nissl granules.

Impregnation with silver (Golgi’s method) stains the entire cell including allneuronal processes; the cell appears as a brown-black silhouette (B – D). Other im-pregnation methods selectively stain the axon terminals (E), or the neurofibrils (F)running in parallel bundles through peri-karyon and axon.