Methods in Neuroanatomy - The Nerve Cell

The availability of methods for studying the structure and function of cells, tissues, and organs is often the limiting factor in expanding our knowledge.

The availability of methods for studying the structure and function of cells, tissues, and organs is often the limiting factor in expanding our knowledge. Certain terms and interpretations can only be understood if the background of the method used is known. Therefore, the methods commonly used in neuroanatomy are presented here briefly.

Nerve cells and glial cells can be demon-strated in thin histological sections by various histological techniques. The Nisslmethod has proven helpful because of excel-lent visualization of the rough endoplasmicreticulum (p. 18), which is abundant innerve cells. However, the different types of nerve cells are essentially characterized by their long processes, the dendrites and the axon, which are not stained by the Nissl method. For demonstration of as many of these processes as possible, thick sections (200 µm) are required. By using silver im-pregnation (Golgi method, p. 18), individualnerve cells with a large number of processes can be demonstrated in such thick sections. Recently, however, this 100-year-old, effec-tive method has taken a back seat, because it is now possible to stain individual nerve cells by filling them with a dye using rec-ording electrodes (A). The advantage of thistechnique is that electrical signals can be recorded from the neuron in question at the same time. In addition to visualization by light microscopy, the intracellularly stainedor Golgi-impregnated nerve cells can sub-sequently be examined by electron micros-copy to show the synaptic contacts of thes eneurons. 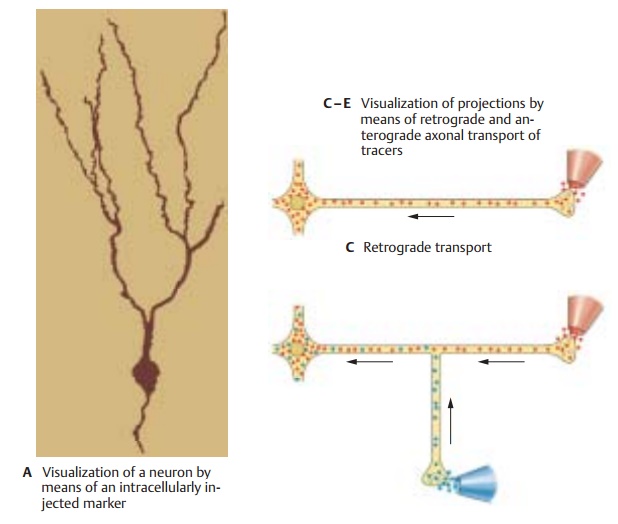 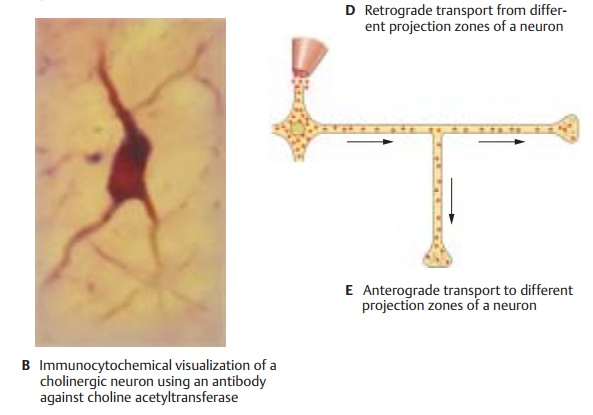 An important characteristic of nerve cells is their specific neurotransmitter or messengersubstance by which communication withother nerve cells is achieved. By means of immunocytochemistry and the use of anti-bodies against the messenger substances themselves, or against neurotransmitter-synthesizing enzymes, it is possible to visual-ize nerve cells that produce a specific trans-mitter (B). Again, these immunocytochemi-cally stained nerve cells and their processescan subsequently be examined by electron microscopy.

The longest processes of nerve cells, the axons (which can be up to 1 m long in humans), cannot be traced to their target area in histological sections. In order to demonstrate the axonal projections of neu-rons to different brain regions, axonal trans-port (p. 28, D) is utilized. By means of anter-ograde and retrograde axonal transport, substances are transported from the nerve cell body to the axon terminal and from the axon terminal back to the nerve cell body. Very long fiber connections can be visual-ized (C – E) by means of tracers (e.g., fluorescent dyes) that are injected either into the target area or into the region con-taining the cell bodies of the corresponding population of neurons; the tracers are then taken up by the axon terminals or by the cell bodies of the projection neurons, respec-tively. When using retrograde transport (C), the tracer is injected into the assumed tar-get area. If the assumed connecting tracts exist, the tracer will accumulate in the cell bodies. By means of retrograde transport and the use of different fluorescent dyes (D), different projection zones of one and the same neuron can be demonstrated. When using anterograde transport (E), the tracer is injected into the region of the cell bodies of projecting neurons. Labeled axon terminals will be visible in the assumed target zone if the labeled neurons indeed project to this area.

Tissue cultures of nerve cells are being em-ployed to an increasing extent for studying the processes of development and re-generation of nerve cells, and also for study-ing the effects of pharmaceuticals.