Structure of the Myelin Sheath in the CNS - The Nerve Fiber Structure of the Myelin Sheath in the CNS

The myelin sheath in the CNS (B) shows distinct differences as compared to the myelin sheath of the peripheral nerves . Whereas the Schwann cell in the PNS myeli-nates only one axon, an oligodendrocyte (B9) in the CNS myelinates several axons and will later remain connected with several inter-nodes via cytoplasmic bridges. The extent and shape of the cell becomes clear when visualizing the internodes as being unfurled (C). The mechanism of the myelination process is unknown. The external mesaxon forms an external bulge (B10) starting from the cytoplasmic bridge. The myelin lamellae terminate at the paranodal region (B11) (node of Ranvier). As seen in the longitudi-nal section, the innermost lamella termi-nates first and the outermost lamella covers the remaining endings, terminating directly at the node of Ranvier. At the ends of the lamellae, the dense major period lines widen into pockets filled with cytoplasm (B12). The axon of the central nerve fiber is completely exposed in the area of the node of Ranvier. There are no Schmidt–Lanter-man incisures in the CNS. 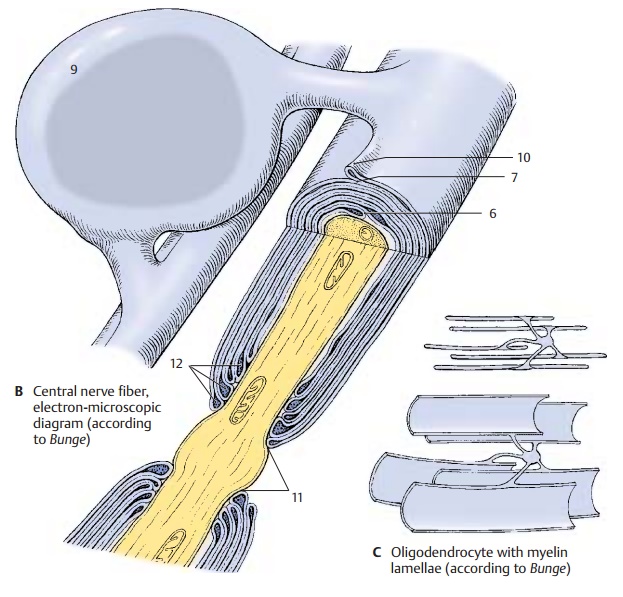