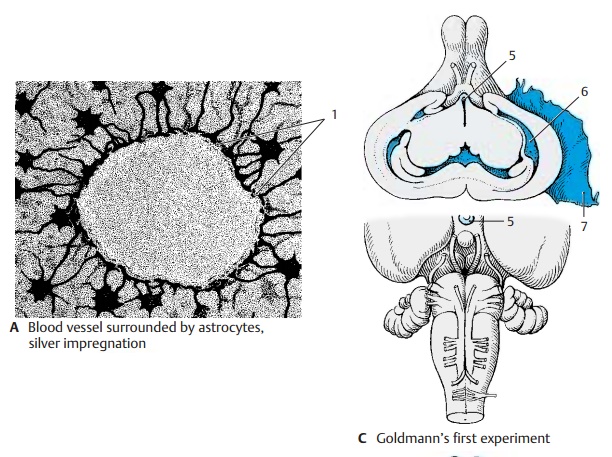 Cerebral blood vessels are of mesodermal origin. They grow during development from the mesodermal coverings into the brain tissue.

Cerebral blood vessels are of mesodermal origin. They grow during development from the mesodermal coverings into the brain tissue. In histological preparations, they are mostly surrounded by a narrow empty cleft (Virchow–Robin space, perivascular space), an artifact caused by tissue shrinkage during histological preparation. Arteries and arterioles are of the elastic type, that is, their muscles are poorly developed and their contractility is limited. The capillaries exhibit a nonfenestrated closed endothelium and a closed basal membrane. There are nolymph vessels in the CNS.

Astrocyte processes extend to the capillariesand widen into perivascular glial feet (AB1). In electron micrographs, capillaries are completely covered by perivascular feet. The capillary wall consists of endothelial cells (BE2) which overlap at their margins like roof tiles and are joint together by zonulaeoccludentes (tight junctions). The capillaryis enclosed by the basal lamina (BE3) and the astrocyte covering (BE4). The latter can becompared to the glial limiting membrane; both structures separate the ec-todermal tissue of the CNS from the adja-cent mesodermal tissue. 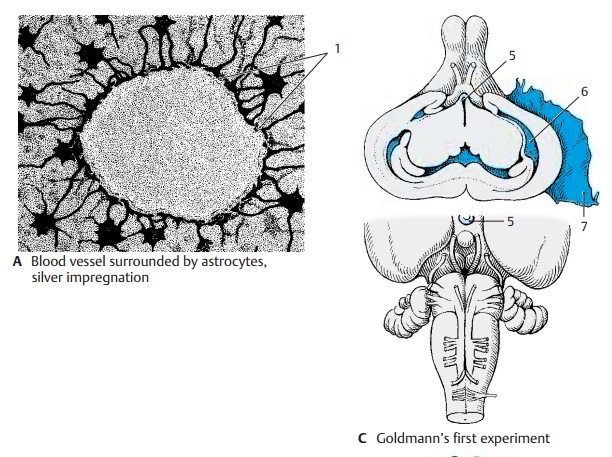 The sealing of the brain tissue from the rest of the body manifests itself in the blood–brain barrier, aselective barrierfor numer-ous substances that are prevented from penetrating from the bloodstream through the capillary wall into the brain tissue. 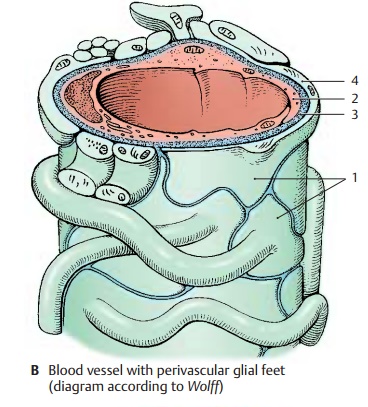 This barrier was first demonstrated by Gold-mann’s experiments using trypan blue. If the dye is injected intravenously into experi-mental animals (Goldmann’s first experiment) (C), almost all organs stain blue, but the brain and spinal cord remain unstained. Minor blue staining is only found in the graytubercle (C5), the postremal area, and the spinal ganglia. The choroid plexus (C6) andthe dura (C7) show a distinct blue staining. The same pattern is observed in cases of jaundice in humans; the bile pigment stains all organs yellow, only the CNS remains un-stained. If the dye is injected into the spaceof the cerebrospinal fluid (Goldmann’s secondexperiment) (D), brain and spinal cord arediffusely stained on the surface, while the rest of the body remains unstained. Thus, there exists a barrier between the CSF and the blood but not between the CSF and the CNS. We therefore distinguish between a blood–brain barrier and a blood–cere-brospinal fluid barrier. The two barriersbehave in different ways.

The site of the blood–brain barrier is the capillary endothelium (E) (see also vol. 2);in the brain, it forms a closed wall without fenestration. By contrast, the capillary walls of many other organs (liver, kidney [E8]) ex-hibit prominent fenestration which allows for extensive metabolite exchange. The bar-rier effect has been demonstrated for numerous substances in studies using iso-topes. The barrier may result in a complete blockade or in a delay of penetration. Whether or not drugs can penetrate this barrier has major practical implications. 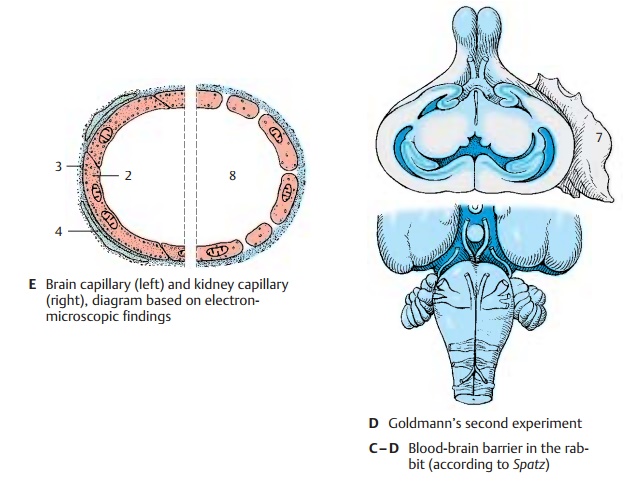