Transmission of impulses at the chemical synapses is mediated by neurotransmitters.

Transmission of impulses at the chemical synapses is mediated by neurotransmitters. The most widely distributed transmitter substances in the nervous system are acetylcholine (ACh), glutamate, gamma-aminobutyric acid (GABA), and glycine.Glutamate is the most common excitatory transmitter, GABA is a transmitter of the in-hibitory synapses in the brain, and glycine is an inhibitory transmitter in the spinal cord.

The catecholaminesnorepinephrine (NE) and dopamine (DA) also act as transmitters, and so does serotonin (5-HT). Many neu-ropeptides act not only as hormones in thebloodstream but also as transmitters in the synapses (e.g., neurotensin, cholecys-tokinin, somatostatin).

The transmitters are produced in the peri-karyon and stored in the vesicles of the axon terminals. Often only the enzymes required for transmitter synthesis are produced in the perikaryon, while the transmitter sub-stances themselves are synthesized in the boutons. The small and clear vesicles are thought to carry glutamate and ACh, the elongated vesicles of the inhibitory synapsescarry GABA, while norepinephrine and dopamine are present in the granular ves-icles (C).

Most vesicles are located near the presyn-aptic membrane, the density of which can be demonstrated by special procedures as a grid with hexagonal spaces (D3). The ves-icles pass through these spaces to reach the presynaptic membrane and, upon excita-tion, empty their content into the synaptic cleft by fusing with the presynaptic mem-brane (omega figure) (D4). The transmitter substances are delivered in certain quanta, the morphological equivalents of which are the vesicles. Some of the transmitter molecules return into the bouton by reup-take (D5). 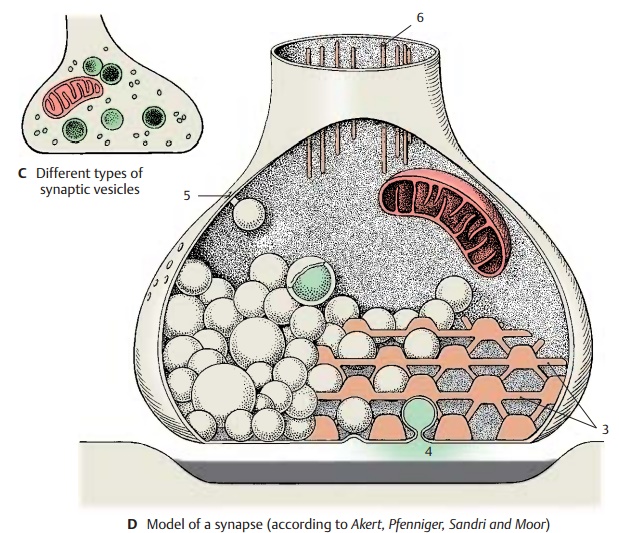 Many neurons, perhaps most of them, pro-duce more than one transmitter substance. Nevertheless, they are classified according to their functionally most important neu-rotransmitter as glutamatergic, cholinergic, catecholaminergic (noradrenergic anddopaminergic), serotoninergic, and pepti-dergic neurons. The catecholaminergic and serotoninergic neurons can be identifiedby fluorescence microscopy because their transmitters show a green-yellow fluores-cence following exposure to formalin vapor (A, B). It is thus possible to trace the axon and to recognize the perikaryon and the outline of its nonfluorescent nucleus. The fluorescence is very faint in the axon, more distinct in the perikaryon, and most intense in the axon terminals. It is here that the highest concentration of transmitters oc-curs. Cholinergic neurons can be demon-strated by a histochemical assay for acetyl-cholinesterase, the enzyme required for thedegradation of acetylcholine. Since this enzyme is also produced by noncholinergic neurons, the proper assay is by immunocy-tochemistry using antibodies against cholineacetyltransferase, the acetylcholine-synthe-sizing enzyme. Other transmitters and neu-ropeptides can also be demonstrated by im-munocytochemistry (C). It has been shown by double-labeling that many neuropep-tides are produced together with classical neurotransmitters within the same neuron. So far, the functional significance of cotrans-mission, i.e., the release of different trans-mitters by the same neuron, has been stud-ied in detail only on some neurons of the au-tonomic nervous system. 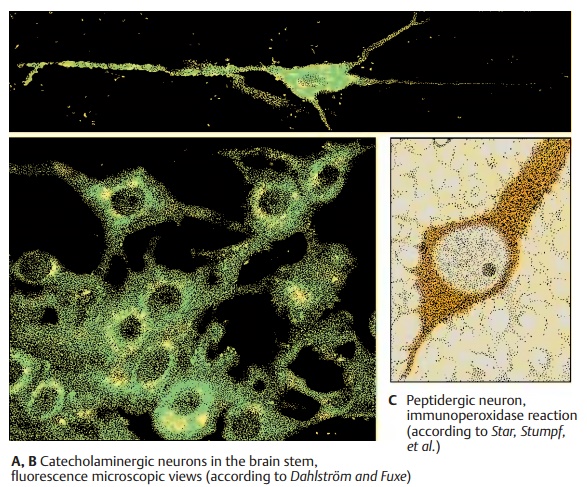