Chapter: Nervous System and Sensory Organs : Development and Structure of the Human Brain

Evolution of the Brain

In the course of evolution, the vertebrate brain developed into the organ of human intelligence.

Evolution of the Brain

In the course of evolution, the vertebrate brain developed into the organ of human intelligence. Since the ancestors are extinct, the developmental sequence can only be re-constructed by means of species that have retained a primitive brain structure. In am-phibiansand reptiles, the telencephalon(A1) appears as an appendix to the large ol-factory bulb (A2); mesencephalon (A3) and diencephalon (A4) lie free at the surface. Al-ready in primitive mammals (such as the hedgehog), however, the telencephalon ex-pands over the rostral parts of the brain stem; in lemurs, it completely overlays the diencephalon and mesencephalon. Thus, the phylogenetic development of the brain essentially consists of a progressive enlarge-ment of the telencephalon and a transfer of the highest integrative functions to this part of the brain. This is called telencephaliza-tion. Ancient primitive structures are stillretained in the human brain and are inter-mingled with new, highly differentiated structures. Therefore, when we talk about new and old components of the human brain, we refer to the brain’s evolution. The brain is neither a computer nor a thinking machine constructed according to rational principles; it is an organ that has evolved in countless variations over millions of years. 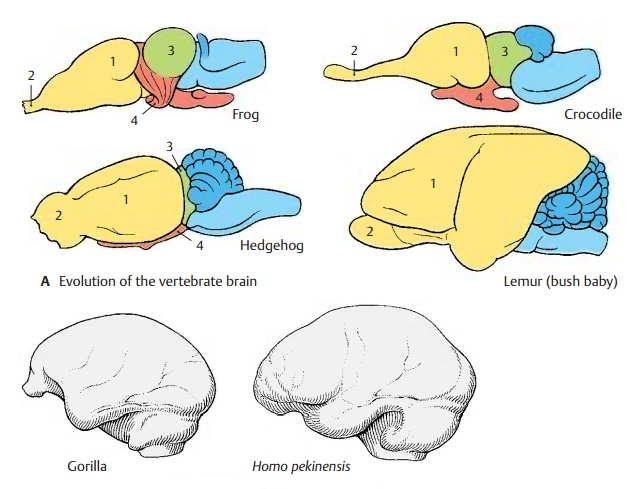 We can follow the morphological evolu-tion of the human brain by means of castsmade of fossil cranial cavities (B, C). The positive cast of the cranial cavity (en-docranial cast) is a rough replica of theshape of the brain. When comparing the casts, the enlargement of the frontal and temporal lobes is striking. The changes from Homo pekinensis via Neanderthal, the inventorof sharp flint knifes, to Cro-Magnon (B), the creator of cave paintings, are obvious. However, there are no appreciable differ-ences between Cro-Magnon and present-dayhumans (C).

During phylogenesis and ontogenesis, the in-dividual brain divisions develop at different times. The parts serving the elementary vital functions develop early and are already formed in primitive vertebrates. The braindivisions for higher, more differentiated functions develop only late in higher mam-mals. During their expansion, they push the early-developed brain parts into a deeper location and bulge outward (they become prominent). 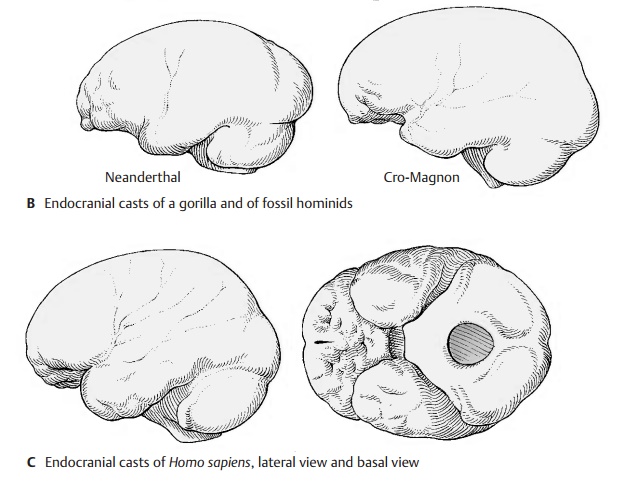