Chapter: Nervous System and Sensory Organs : Development and Structure of the Human Brain

Anatomy of the Human Brain

The individual subdivisions of the brain contain cavities or ventricles of various shapes and widths.

Anatomy of the Brain

The individual subdivisions of the brain contain cavities or ventricles of various shapes and widths. The primary cavity of theneural tube and cerebral vesicle becomesmuch narrower as the walls thicken. In the spinal cord of lower vertebrates, it survives as thecentral canal. In the human spinal cord, it becomes completely occluded (ob-literated). In a cross section, only a few cellsof the former lining of the spinal cord mark the site of the early central canal (A1). In the brain, the cavity survives and forms theventricular system (p. 280) which is filledwith a clear fluid, the cerebrospinal fluid. The fourth ventricle (AD2) is located in the segment of the medulla oblongata and the pons. After a narrowing of the cavity in the midbrain, the third ventricle (CD3) lies in the diencephalon. A passage on both sides of its lateral walls, the interventricular foramen (foramen of Monro) (C – E4), opens into thelateral ventricles (CE5) (firstandsecond ven-tricles) of both cerebral hemispheres.

In frontal sections through the hemispheres (C), the lateral ventricles are seen twice; they have a curved appearance (E). This shape is caused by the crescent-shaped growth of the hemispheres (rotation of hemispheres, p. 208, C) which do not expand equally in all directions during development. In the middle of the semicircle is the insula. It lies deep in the lateral wall of the hemisphere on the floor of the lateral fossa (C6) and is overlain by the adjacent parts, the opercula (C7), so that the surface of the hemisphere shows only a deep groove, the lateral sulcus (lateral fissure, fissure of Sylvius) (BC8). Each hemisphere is subdivided into several cere-bral lobes (B) (p. 212): frontal lobe (B9), parietal lobe (B10), occipital lobe (B11), and temporal lobe (B12).

The diencephalon (dark gray in C, D) and brain stem essentially become overlain bythe cerebral hemispheres, thus rendered visible only at the base of the brain or in a longitudinal section through the brain. In a median section (D), the subdivisions of thebrain stem can be recognized: medulla ob-longata (D13), pons (D14), mesencephalon (D15), and cerebellum (D16). The fourth ven-tricle (D2) is seen in its longitudinal dimen-sion. On its tentlike roof rests the cerebel-lum. The third ventricle (D3) is opened in its entire width. In its rostral section, the inter-ventricular foramen (D4) leads into the lateral ventricle. Above the third ventricle lies the corpus callosum (D17); this fiber plate, seen here in cross section, connects the two hemispheres. 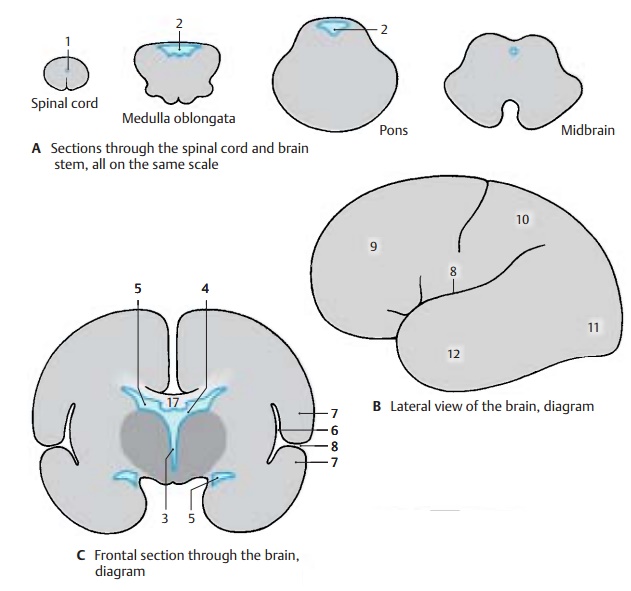 Weight of the Brain

The average weight of the human brain ranges between 1250 g and 1600 g. It is re-lated to body weight: a heavier person usu-ally has a heavier brain. The average weight of a male brain is 1350 g, that of a female brain 1250 g. By the age of 20, the brain is supposed to have reached its maximum weight. In old age, the brain usually loses weight owing to age-related atrophy. The weight of the brain does not indicate the in-telligence of a person. Examination of the brains of prominent people (“elite brains”) yielded the usual variations. 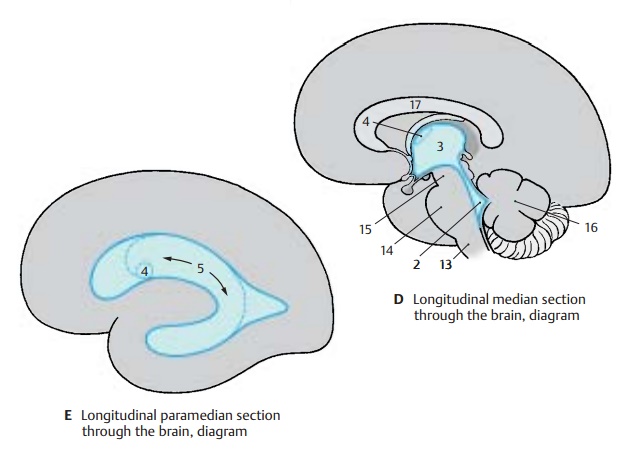 Lateral and Dorsal Views (A, B)

The two cerebral hemispheres overlie all other parts of the brain; only the cerebellum (A1) and the brain stem (A2) are visible. The surface of the cerebral hemisphere is characterized by a large number of grooves, or sulci, and convolutions, or gyri. Beneath the surface of the relief of gyri lies the cere-bral cortex, the highest nervous organ: con-sciousness, memory, thought processes, and voluntary activities all depend on the integrity of the cortex. The expansion of the cerebral cortex is increased through the for-mation of sulci and gyri. Only one-third of the cortex lies on the surface, while two-thirds lie in the depth of the gyri. As shown by the dorsal view (B), the hemispheres are separated by a deep groove, the longitudinalcerebral fissure (B3). On the lateral surface ofthe hemisphere lies the lateral sulcus (sulcusof Sylvius) (A4). A frontal section (pp. 9, 215,and 217) clearly shows that this is not a simple sulcus but a deep pit, the lateral fossa.

The anterior pole of the hemisphere is called the frontal pole (A5), the posterior one is called the occipital pole (A6). The cerebral hemisphere is subdivided into several lobes: the frontal lobe (A7) and the parietal lobe (A9), which are separated by thecentral sulcus (A8), theoccipital lobe(A10),and the temporal lobe (A11). The central sul-cus separates the precentral gyrus (A12) (re-gion of voluntary movement) from the post-central gyrus (A13) (region of sensitivity).Both together constitute the central region. 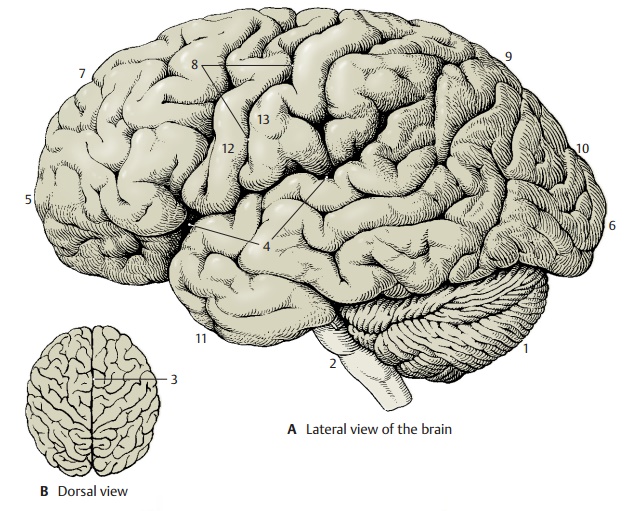 Between the hemispheres lies the dien-cephalon (C14); the corpus callosum (C15)above it connects the two hemispheres. The corpus callosum forms a fiber plate; its oral curvature encloses a thin wall segment of the hemisphere, the septum pellucidum (C16) (p. 221, B18). The third ventricle (C17) is opened. The adhesion of its two walls forms the interthalamic adhesion (C18). The fornix(C19) forms an arch above it. In the anterior wall of the third ventricle lies the anteriorcommissure (C20) (containing the crossingfibers of the olfactory brain); at its base liethe decussation of the optic nerve, or opticchiasm (C21), the hypophysis (C22), and thepaired mamillary bodies (C23); in the caudal wall lies the pineal gland, or epiphysis (C24).

The third ventricle is connected with the lateral ventricle of the hemisphere throughthe interventricular foramen (foramen ofMonro) (C25); it turns caudally into thecere-bral aqueduct (aqueduct of Sylvius) (C26)which passes through the midbrain and widens like a tent to form the fourth ven-tricle (C27) underneath the cerebellum. Onthe cut surface of the cerebellum (C28), the sulci and gyri form the arbor vitae (“tree of life”). Rostral to the cerebellum lies the quadrigeminal plate, or tectal lamina (C29), of the midbrain (a relay station for optic and acoustic tracts). The pons (C30) bulges at the base of the brain stem and turns into the elongated cord, ormedulla oblongata (C31), which turns into the spinal cord. 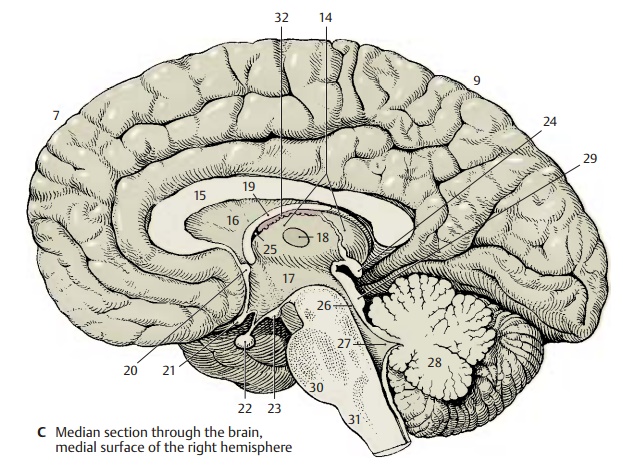 Base of the Brain (A)

The basal aspect of the brain provides an overview of the brain stem, the ventral sur-faces of frontal lobe (A1) and temporal lobe (A2), and the base of the diencephalon. The longitudinal cerebral fissure (A3) separatesthe two frontal lobes; at the basal surface of each hemisphere lies the olfactory lobe with theolfactory bulb (A4) and the olfactory tract (A5). The tract divides in the olfactory trigone (A6) into two olfactory striae which border the anterior perforated substance (A7); the lat-ter is perforated by entering blood vessels. At the optic chiasm (A8), or decussation of the optic nerves (A9), the base of the dien-cephalon begins with the hypophysis (A10) and the mamillary bodies (A11). The pons (A12) bulges caudally and is followed by themedulla oblongata (A13). Numerous cranialnerves emerge from the brain stem. The cerebellum is divided into the medial, deep-lying vermis of the cerebellum (A14) and the two cerebellar hemispheres (A15). 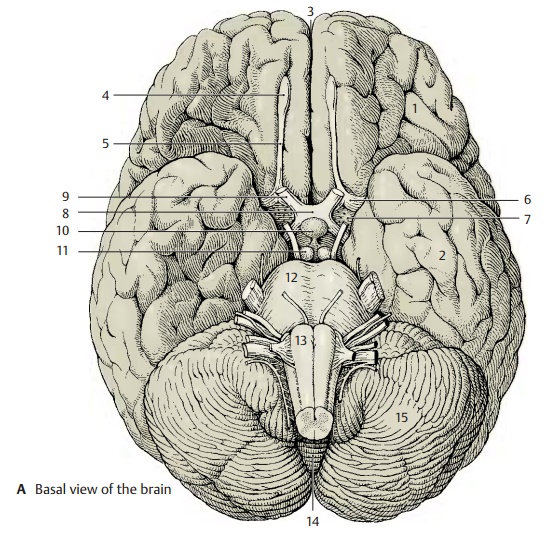 White and Gray Matter (B)

Upon dissecting the brain into slices, the white and gray matter, substantia alba etgrisea, become visible on the cut surfaces.The gray matter represents a concentration of neurons and the white matter the fiber tracts, or neuronal processes, which appear light because of their white envelope, the myelin sheath. In the spinal cord (B16), the gray matter lies in the center and is en-closed by the bordering white matter (as-cending and descending fiber tracts). In the brain stem (B17) and diencephalon, the dis-tribution of gray and white matter varies. The gray areas are called nuclei. In the telen-cephalon (B18), the gray matter lies at theouter margin and forms the cortex, while the white matter lies inside. Thus, the dis-tribution here is the reverse of that in the spinal cord.

The arrangement in the spinal cord repre-sents a primitive state; it still exists in fish and amphibians where the neurons are in aperiventricular position even in the telen-cephalon. The cerebral cortex represents the highest level of organization, which is fully developed only in mammals. 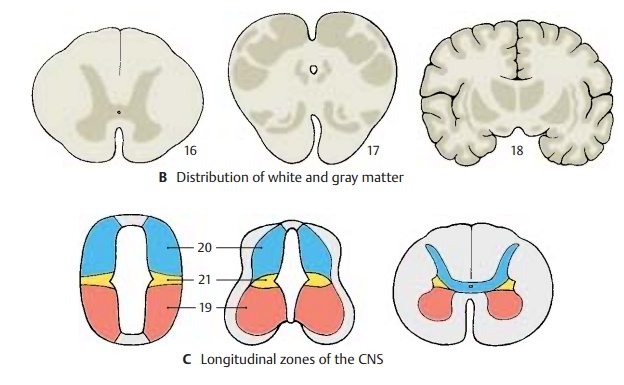 During development, the neural tube is sub-divided into longitudinal zones. The ventral half of the lateral wall, which differentiates early, is called the basal plate (C19) and rep-resents the origin of motor neurons. The dor-sal half, which develops later, is called thealar plate (C20) and represents theorigin ofsensory neurons. Between alar and basalplates lies a segment (C21) from which au-tonomic neurons originate. Thus, a struc-tural plan of the CNS can be recognized in the spinal cord and brain stem, knowledge of which will aid in understanding the or-ganization of various parts of the brain.

The derivatives of basal and alar plates are difficult to identify in diencephalon and tel-encephalon. Many authors therefore reject such a classification of the forebrain.