The insulin receptor is a tetramer of two alpha and two beta chains.

The insulin receptor is a tetramer of two alpha and two beta chains ( Fig. 19.16 ). Just as in insulin, a single gene produces a single protein product that is processed to release the signal sequence and then to give the separate alpha and beta chains of the receptor. The alpha chains are exposed on the cell surface and bind the hormone. Disulfide bonds form between the cysteinerich regions of the two alpha chains and hold them together. The paired beta chains are embedded in the membrane and possess an internal signal-transmitting domain with protein kinase activity. A variety of genetic defects may affect the insulin receptor. Lowered expression of the receptor gene, defects in processing, defective insulin binding, and defects in protein kinase activity are all known. The various syndromes that result are resistant to insulin treatment. 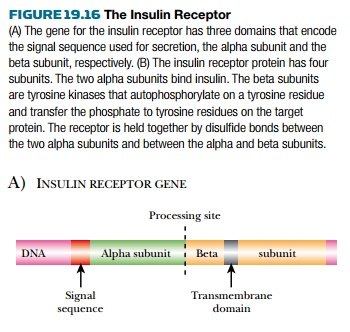 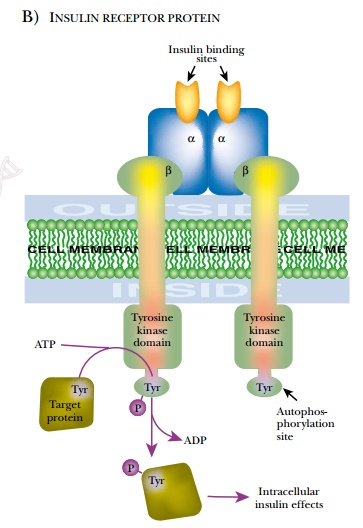 In normal insulin receptors, binding of insulin triggers a conformational change that activates the protein kinase domain. This initiates two alternative phosphorylation cascades. The protein kinase B pathway is responsible for short-term control of glucose metabolism and involves no new protein synthesis ( Fig. 19.17 ). The other pathway proceeds via the signal transmission proteins Ras and MAPK. This leads to gene activation and the synthesis of new proteins, over a longer time scale. The details of insulin action vary between different types of target cells (e.g., liver, fat, or muscle). Overall, insulin lowers blood glucose and promotes its storage as glycogen. If blood sugar is too low, the hormone glucagon acts in oppositionto insulin, promoting the breakdown of glycogen and the release of more glucose into the bloodstream. Glucagon uses cyclic AMP as second messenger. 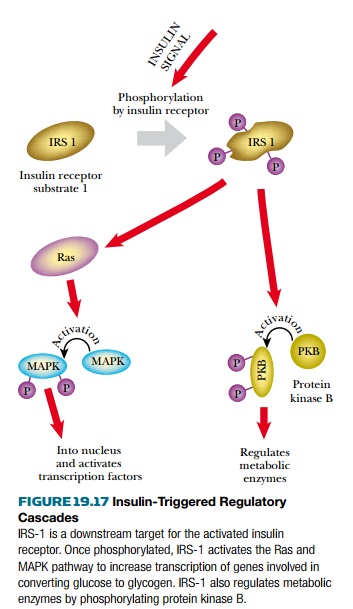