Multicellular organisms depend on coordinating the activities of many different cells, and this requires constant communication.

Many of the more complex diseases of higher organisms are due to aberrations in signalingand regulation. These may be the result of hereditary defects, or they may result from theinjuries and insults accumulated during growth and development. The complexity of suchissues as obesity, diabetes, and behavioral problems often results from the interaction ofgenetic predisposition with environmental effects. We will begin by considering the basics ofcommunication between the cells of higher, multicellular organisms.

Multicellular organisms depend on coordinating the activities of many different cells, and this requires constant communication. Sometimes signals are sent by cell-to-cell contact. More often, signals are sent by chemical means, whether between neighboring cells or over relatively long distances. Local mediators are molecules that carry signals between nearby cells, whereas hormones carry signals to remote tissues and organs ( Fig. 19.1 ). In addition to internal signals between cells, organisms may also send signals from one organism to another. Signal molecules that are passed from one organism to another are called pheromones . Even single-celled microorganisms such as yeast and bacteria communicate with each other by pheromones. Yeast secrete pheromones to signal readiness for mating. Note that pheromones are used for signaling between organisms, whereas hormones circulate internally inside multicellular organisms. 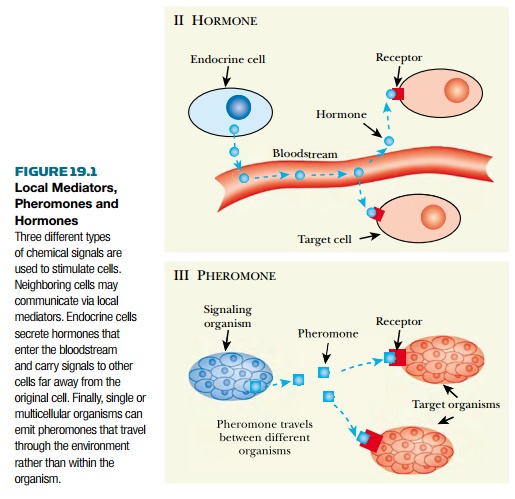 Hormones and pheromones carry messages over long distances by animals, plants, and fungi. In contrast to plants and fungi, multicellular animals also possess nervous systems to send messages. In this case, the signal travels in electrical mode along an extremely elongated cell, known as a neuron until it reaches a junction, or synapse ( Fig. 19.2 ). Here the signal must traverse the gap between two cells by chemical means. Each arriving electrical impulse stimulates the release of a pulse of neurotransmitter molecules from the nerve cell. This chemical signal diffuses across the narrow gap to the next cell. Nervous impulses travel much faster than hormones, and in addition, each neuron delivers its signal to only a single target cell. In contrast, hormones act on multiple recipient cells and travel relatively slowly. 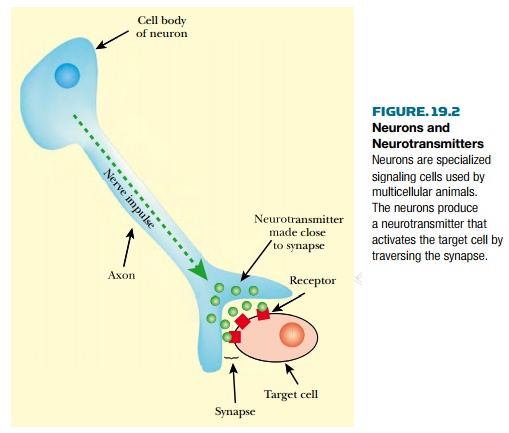