A final key issue is the degradation of fat. Stored fat consists mostly of triglycerides (i.e., glycerol linked to three fatty acids). In adipose cells, triglycerides are hydrolyzed to release fatty acids and glycerol. The fatty acids are oxidized to CO2 in the mitochondria, yielding energy. Normally, fat oxidation is coupled to energy conservation by the respiratory chain. Energy is used to generate a proton gradient across the mitochondrial inner membrane, which may be used to synthesize ATP. If the body needs less energy, then fat oxidation is normally decreased. Burning off surplus fat involves wasting the energy released, and this requires deliberate uncoupling of the respiratory chain (Fig. 19.24). This results in the energy being wasted as heat. 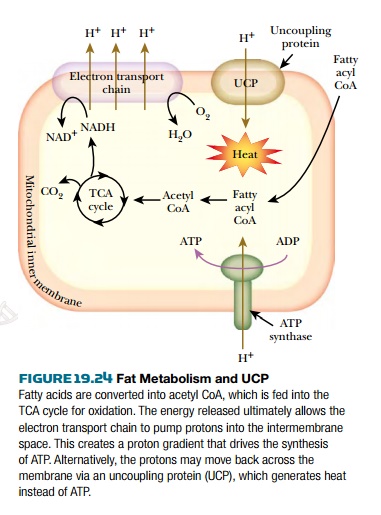 Uncoupling proteins (UCPs) are located in the inner membranes of mitochondria,especially in brown fatty tissue. Brown fat mitochondria are uncoupled when animals get too cold and need more body heat. Three related uncoupling proteins are known. UCP1 is normally found only in brown fatty tissue and was named thermogenin because it helps keep the body warm (Fig. 19.25). When noradrenalin binds to β3-adrenergic receptors on the surfaces of brown fat cells, preexisting UCP1 is rapidly activated. In addition, the same stimulus over a longer time period increases expression of the UCP1 gene, thus increasing the level of UCP1 protein. However, knockout mice lacking UCP1 are cold-sensitive but not obese. 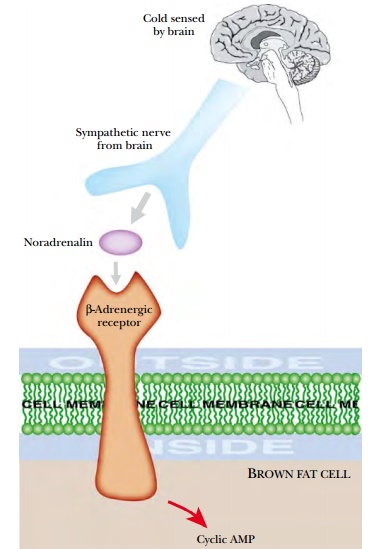 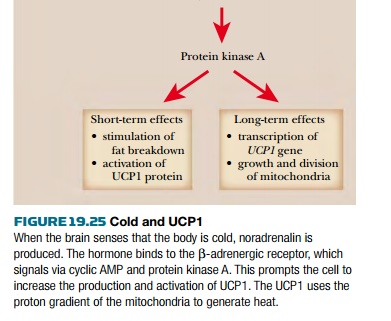 It has been known for a long time that smoking makes people thinner. The active factor is the nicotine in tobacco. Nicotine not only acts to raise UCP1 levels in brown fatty tissue, but also induces the synthesis of UCP1 in white fat cells, where it is normally absent. Nicotine also decreases the appetite.

UCP2 is present in most tissues and UCP3 mainly in muscle. The amount of UCP2 goes up if mice eat a high-fat diet, and this presumably helps burn off the fat. Mice unable to make higher levels of UCP2 do put on weight. Certain mutations in the UCP2 and UCP3 genes, which are both located close together on chromosome 11, have been linked to human obesity. However, the overall regulation and role of UCP2 and UCP3 are still poorly understood. A curious recent finding is that a deficiency of aquaporin 7 promotes obesity. Although water and glycerol can diffuse across cell membranes, aquaporins greatly speed up this movement. In the absence of aquaporin 7, glycerol cannot exit fat-degrading cells rapidly enough.

Consequently, triglyceride levels build up and fat is not broken down efficiently.