The regulatory nucleotide cyclic AMP (cAMP) is often used as a second messenger by multicellular animals.

The regulatory nucleotide cyclic AMP (cAMP) is often used as a second messenger by multicellular animals. Comparison of the way in which cyclic AMP is used by bacteria, single-celled eukaryotes, and higher organisms illustrates how the interplay among signaling, multicellularity, and reproduction has developed as we ascend the evolutionary ladder.

Cyclic AMP is synthesized from ATP by the enzyme adenylate cyclase, which is located in the cytoplasmic membranes of both bacteria and eukaryotes. Cyclic AMP is widespread in nature, but its precise regulatory function varies widely. In bacteria cAMP often regulates gene expression in response to nutrient availability, although the nutrient may vary from one type of bacteria to another. In animals, cAMP is often used as a second messenger, transmitting a signal from a receptor to the nucleus.

Despite the apparent differences, there are fundamental similarities between the prokaryotic and eukaryotic signaling systems. The level of cAMP depends on the activity of adenylate cyclase, which in turn depends on signals received from other proteins. In both bacteria and animals, this original signal originates from outside the cell via a membrane protein. In the case of Escherichia coli , adenylate cyclase responds to the external presence of glucose (or other highly favored sugars). The proteins of the phosphotransferase system (PTS) , which transports glucose and other sugars, transmit the signal to adenylate cyclase. As glucose enters the bacterial cell, it receives a phosphate group from the glucose transporter and is converted to glucose 6-phosphate. When glucose is plentiful, it consumes so manyphosphate groups that the proteinsof the PTS are mostly in theirnonphosphorylated state ( Fig.19.9 ). When glucose is scarce, the phosphorylated forms accumulate. In particular, phosphorylated enzyme IIA glc is involved in signal transmission. This binds to and activates adenylate cyclase to make cyclic AMP. 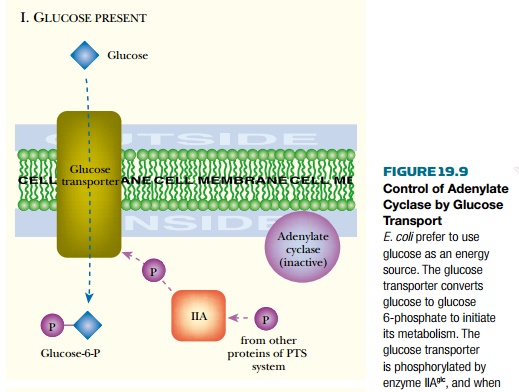 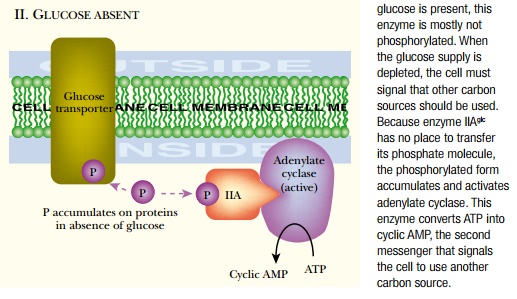 In animals, adenylate cyclase often responds to hormonal messages that reveal the nutritional status of the whole animal. This is frequently mediated by the coupling of a hormone receptor to a G protein n the cell membrane. G proteins were so named because their mechanism depends on binding GTP when activated. They gothrough a cycle in which the bound GTP is split to give GDP and phosphate ( Fig. 19.10 ). Thus, cyclic AMP acts as a second messenger in response to signals delivered to the cell by a hormone. 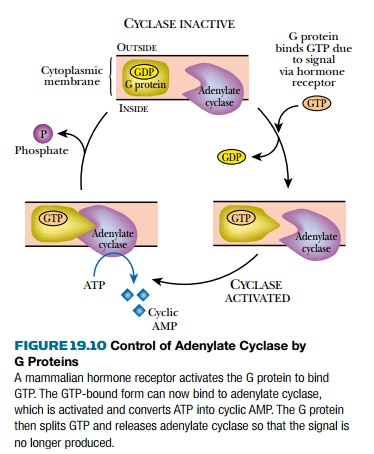 In both animals and bacteria, cyclic AMP increases transcription of certain genes. In bacteria, cAMP binds to CRP protein . This is a DNA binding protein that acts as a global gene activator. In animal cells, cyclic AMP not only affects gene expression but also directly affects enzyme activity ( Fig. 19.11 ). In animals, accumulation of cyclic AMP activates protein kinase A (PKA) . In its inactive form this enzyme consists of two regulatory (R) subunits and two catalytic (C) subunits. When cyclic AMP binds to the R-subunits, the C-subunits are released and proceed to phosphorylate a variety of target proteins, depending on the cell type. Some of these are enzymes and are located in the cytoplasm. Phosphorylation may cause activation or deactivation, depending on the particular enzyme. In addition, a few active C-subunits enter the nucleus where they phosphorylate the CREB protein (cyclic AMP response element binding protein) . The phosphorylated form of CREB binds to a specific DNA sequence, the CRE (cyclic AMP response element) found in front of those genes that are activated by cyclic AMP. 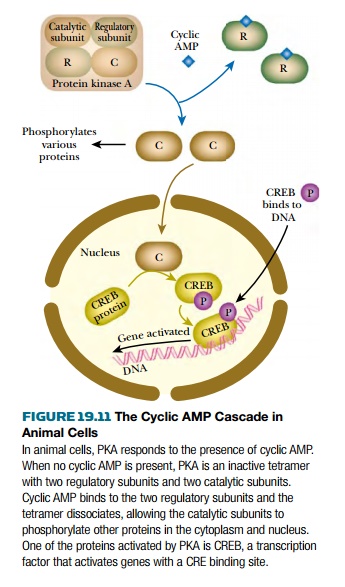