Our word obesity comes from the Latin obedere , meaning “to devour.” Overeating and the accompanying consequences have become epidemic in the industrialized nations.

Our word obesity comes from the Latin obedere , meaning “to devour.” Overeating and the accompanying consequences have become epidemic in the industrialized nations. Americans spend more than $12 billion a year on slimming products (diets, exercise machines, liposuction, etc.), yet they are the most overweight people of any industrial nation and are getting fatter. About 35 million Americans are sufficiently overweight to seriously affect their health. The increased health costs amount to some $40 billion per year, more than three times the amount spent on slimming products! Obesity is not just a matter of diet and (lack of) exercise, but depends greatly on genetics.

The ob (obese) gene encodes a protein hormone called leptin . Mice defective in both copies of the ob gene lack leptin and weigh up to three times as much as normal mice. When obese mice are treated with leptin, they not only eat much less, but also burn off fat much faster and may lose 30% of their body weight. The genes for human leptin and mouse leptin have both been cloned into the bacterium E. coli , allowing the hormones to be made in large quantities. Leptin from both species is very similar and acts in the same way on obese mice.

Human trials using cloned human leptin have shown only moderate effects. Some test subjects lost a dozen pounds over 6 months. However, leptin has little effect on most very obese people, indicating that other factors are important. Leptin defects cause gross obesity, which appears almost from birth and is technically known as morbid obesity . This is a relatively rare condition in humans. Unlike obesity in mice, few humans have been found who have defective ob genes and whose obesity is due to lack of leptin. Another reason why leptin is unlikely to be widely used is that digestive enzymes degrade it. So leptin cannot be taken by mouth but has to be injected daily.

Other obese humans have defects in other components of the leptin regulatory circuit. Many  obese humans actually have higher than normal leptin levels and may suffer from defects in the leptin receptor . Mice lacking leptin receptor, due to mutation of the db gene , have two to three times the normal levels of leptin in their blood. The leptin receptor is found on the surface of brain cells, especially in the hypothalamus. It binds leptin that is circulating in the bloodstream and so passes the signal on to the brain ( Fig. 19.21 ). 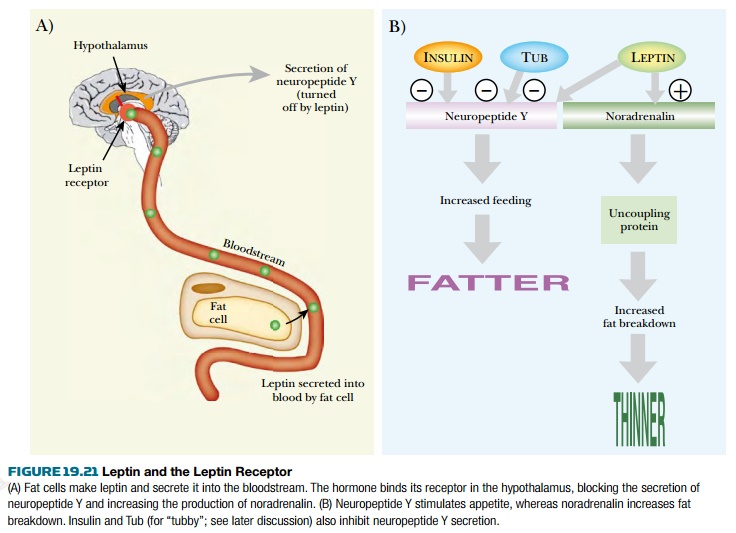 When leptin binds to its receptor, it turns off the release of neuropeptide Y by the brain. Neuropeptide Y increases feeding and so makes animals fatter. In addition, leptin stimulates the release of noradrenalin (= norepinephrine ) by the nervous system. This binds to b 3-adrenergic receptors on the surfaces of fat cells and signals them to burn off fat. Partially defective β3-adrenergic receptors have been found in some overweight people. The leptin receptor has a cytoplasmic tail that acts as a protein kinase and is responsible mfor transmitting the signal. When leptin binds, it initiates a phosphotransfer cascade that ultimately triggers release of noradrenaline. However, the mRNA for the leptin receptor undergoes alternative splicing to give proteins of different lengths ( Fig. 19.22 ). The longer isoform is found in the hypothalamus and activates the multiple signaling pathways described earlier. The shorter isoform lacks the cytoplasmic kinase domain and its role is unclear, although it may bind leptin and carry it across the blood-brain barrier. As noted earlier, db mutants lack receptor completely. However, in fa mutants the receptor is present but has a damaged signaling tail. (The fa mutation, found originally in rats, is in the db gene, encoding the leptin receptor, not in the fat gene.) 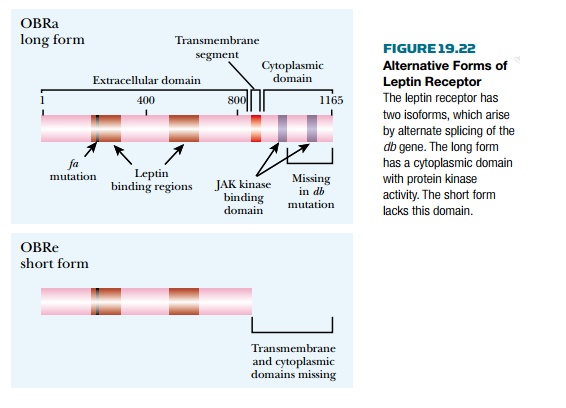