A Multitude of Genes Affect Obesity

Fat accumulation is affected by many factors, both genetic and environmental. Most cases of obesity are not due to defects in leptin or its receptor.

A MULTITUDE OF GENES AFFECT OBESITY

Fat accumulation is affected by many factors, both genetic and environmental. Most cases of obesity are not due to defects in leptin or its receptor. Nonetheless, the discovery that at least some cases of obesity are largely genetic has created a major research effort in this area. In addition, there are the potential profits from drugs for controlling appetite and body weight. An assortment of genes and proteins now known to affect body weight and fat accumulation is listed in Table 19.1 . 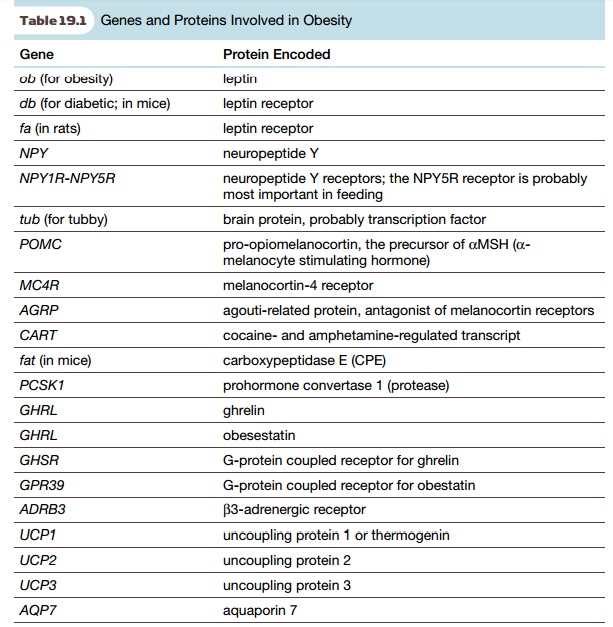 This list gives a confusing choice of genes on which to blame obesity. It also gives a large number of possible targets for drug development. Unfortunately, a change in any one factor tends to affect the level of other components of the regulatory system. Consequently, the development of a “magic bullet” to control obesity is unlikely. Exactly how the overall control network is arranged remains for future research to uncover.

Insulin not only controls sugar levels in the blood but also plays a role in fat metabolism. Furthermore, insulin receptors are present on some brain cells, thus linking insulin to the control of eating and body fat. Insulin decreases feeding by regulating neuropeptide Y. As discussed earlier, insulin is secreted as the inactive precursor proinsulin, which must beprocessed to insulin in order to act. Carboxypeptidase E is anenzyme that processes proinsulin into active insulin. In mice referred to technically as “fat,” there is a genetic defect in the gene for carboxypeptidase E. These mice therefore accumulate proinsulin. They also resemble many overweight people in growing fatter as they age, illustrating how lowered insulin levels contribute to fat accumulation. 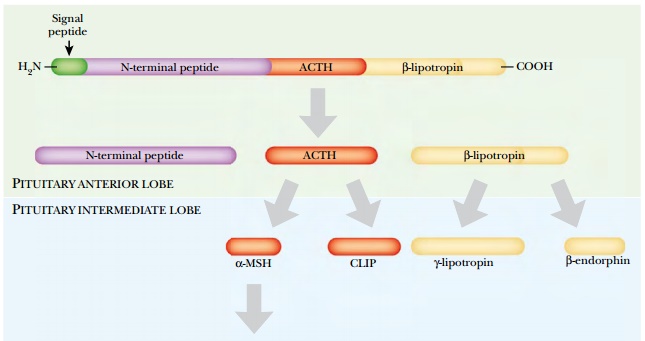 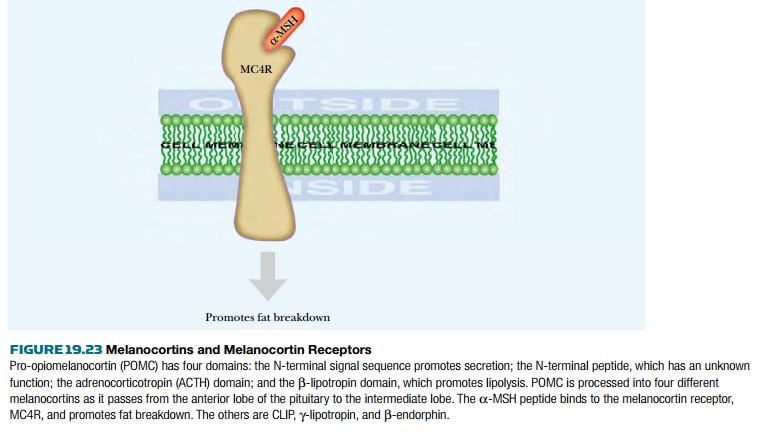 Another set of regulators that affect fat metabolism is the melanocortins ( Fig. 19.23 ). Pro-opiomelanocortin (POMC) is a precursor protein that is cleaved to give several different melanocortins. Of these, a-melanocyte stimulating hormone ( aMSH) affects fat accumulation. There are also several different melanocortin receptors . Of these, melanocortin-4 receptor (MC4R) is needed by aMSH to promote fat breakdown. Defects in the POMC or MC4R genes may result in obesity. How melanocortin control interacts with other regulatory factors is still being debated. Another defect is found in “tubby” mice, defective in the tub gene whose function is still uncertain. Defects in tub cause moderate accumulation of fat later in life. The Tub protein is present in the hypothalamus, the same area of the brain targeted by leptin. It also seems to regulate the level of neuropeptide Y, but by a mechanism different from leptin or melanocortin. Ghrelin is a recently discovered 28-amino-acid peptide that has major effects on feeding behavior. The levels of ghrelin in blood rise as mealtimes approach and fall afterward, suggesting that ghrelin plays a major role in signaling hunger. Ghrelin was originally named as a “growth hormone releasing factor” but has other effects and appears to block leptin action. Injecting rats with ghrelin stimulates them to eat more and gain weight. Obesestatin is a related peptide hormone that opposes the action of ghrelin. Fascinatingly, both ghrelin and obesestatin are derived from processing of the same prohormone, proghrelin.