Diabetes mellitus is actually a group of related diseases in which the level of glucose in the blood and/or urine is abnormally high.

Diabetes mellitus is actually a group of related diseases in which the level of glucose in the blood and/or urine is abnormally high. There is considerable variation in the detailed symptoms, and multiple genes are involved. Many cases of diabetes are due to the absence of insulin , a small protein hormone made by the pancreas, which controls the level of sugar in the blood. Lack of insulin results in high blood sugar, and this causes a variety of complications. In patients with insulin-dependent diabetes mellitus (IDDM), injections of insulin keep blood sugar levels down to near normal. Other defects affectthe insulin receptor , and so these will notrespond to insulin treatment. 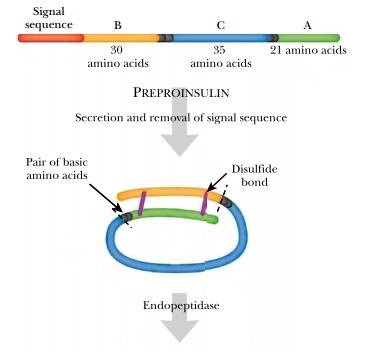 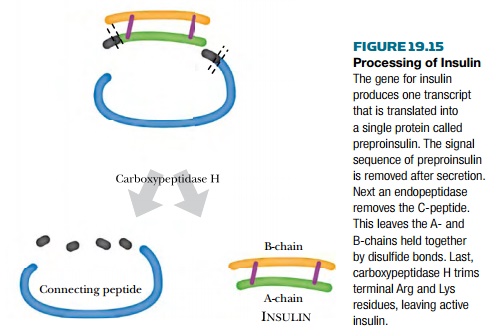 Insulin is a protein made of two separate polypeptide chains, the A- and B-chains ( Fig. 19.15 ). Disulfide bonds hold the two chains together. Although the final protein has two polypeptide chains, insulin is actually encoded by a single gene. The original gene product, preproinsulin , is a single polypeptide chain, which contains both the A- and B-chains together with the C- (or connecting) peptide and a signal sequence. Preproinsulin itself is not a hormone but must first be processed to give insulin. The signal sequence at the N-terminal end is required for secretion and is then removed by signal peptidase. This leaves proinsulin . Removal of the C-peptide requires endopeptidases that cut within thepolypeptide chain. These recognize pairs of basic amino acids at the junctions of the Cpeptide with the A- and B-chains. Finally, the terminal Arg and Lys residues are trimmed off by carboxypeptidaseH