The interaction of genetics and behavior is complex. Note also that metabolism and behavior overlap. As discussed earlier, the genetic effects on obesity are not merely physiological.

The interaction of genetics and behavior is complex. Note also that metabolism and behavior overlap. As discussed earlier, the genetic effects on obesity are not merely physiological. Feeding behavior is also affected by mutations in several of the genes controlling body weight.

Previous information in the area of behavioral genetics has been largely statistical in nature, but connections at the molecular level are beginning to emerge. For example, there appears to be a connection between violence and uptake of the neurotransmitter serotonin. Different alleles of the gene for the serotonin transporter are known and the lower activity variants correlate with aggressive behavior.

Another association with violent criminal behavior involves monoamine oxidase (MAO) activity in the brain. It has been known for many years that there is a statistical correlation betweenviolence and the levels of MAO assayed in blood platelets. Lower MAO activity is found in violent criminals, both male and female. More recently, the underlying genetic defects have been characterized for a small number of extreme cases.

Signals are transmitted between nerve cells by a variety of chemical neurotransmitters that must be degraded once the signal has been received. Monoamine oxidase A is located in the outer membrane of the mitochondria of neurons and initiates degradation of neurotransmitters of the catecholamine family—dopamine, adrenalin (= epinephrine), and noradrenalin (= norepinephrine; Fig. 19.26 ). The gene for monoamine oxidase A (MAO-A) is located on the X chromosome, and individuals with deletions and point mutations are known. Alterations in the MAO-A gene result in marked changes in monoamine metabolism and are associated with variable cognitive deficits and behavioral changes in both humans and transgenic mice. 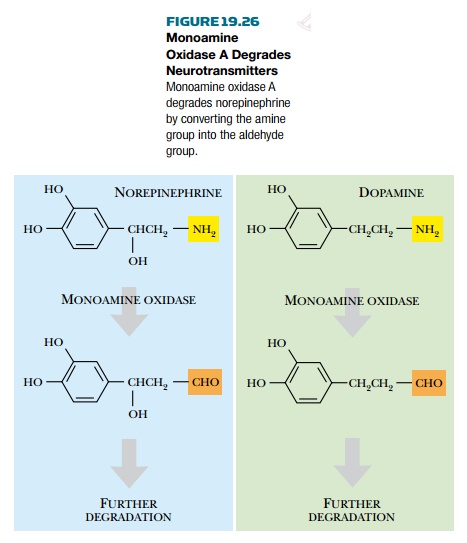 A monoamine oxidase A defect has been linked to violence among males in a family in the Netherlands. More than a dozen males who showed marginal mental retardation anduncontrolled violent outbursts proved to have a point mutation in the eighth exon of the MAO-A gene. This mutation changed a codon (CAG) for Gln to a stop codon (TAG) and resulted in a truncated protein. No mutation was found in the MAO-A gene of normal brothers of the violent males. Females who gave birth to violent males were shown to have one normal and one mutant allele, as expected for carriers of a sex-linked defect. In affected individuals neurotransmitter levels would rise well above normal levels, especially under stressful situations. It seems likely that minor stress triggers a disproportionate response.

The incidence of severe MAO-A defects is extremely low and is unlikely to account for more than a tiny proportion of criminal behavior. On the other hand, it is conceivable that the wider correlation between MAO levels and violent crime is due to genetic alterations that result in moderate reduction of monoamine oxidase activity. This is a matter for further investigation.