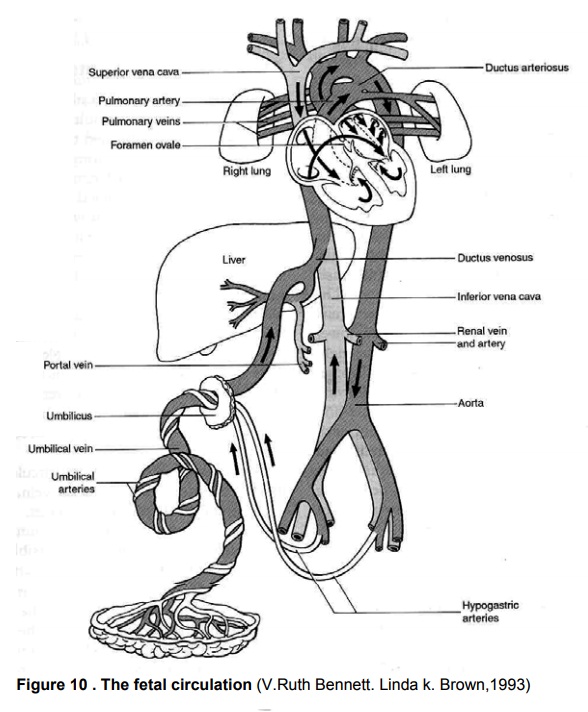 At the birth there is a dramatic alteration in this situation and almost instaneous change must occur.

At the birth there is a dramatic alteration in this situation and almost instaneous change must occur. Besides this all, the postnatal structures must be in place and ready to take over. There are several temporary structures inaddition to the placenta itself and the umblical cord and these enable the fetal circulation to take place while allowing for the changes at birth.

The Umbilical vein Leads from the umblical cord to theunderside of the liver and carries blood rich in oxygen and nutrients. It has a branch which joins the portal vein and supplies the liver.

The ductus vensous (from a vein to a vein) connects theumblica vein to the inferior venacava. At this point the blood mixes with deoxygenated blood returning from the lower parts of the body. Thus the blood throughout the body is at best partially oxygenated.

The foramen ovale (oval opening) is a temporary openingbetween the atria which allows the majority of blood entering from the inferior vencava to pass across into the left atrium. The reason for this diversion is that the blood does not need to pass through the lungs since it is already oxygenated.

The ductus arteriosus (from an artery to an artery) leadsfrom the bifuraction of the pulmonary artery to the descending aorta, entering it just beyond the point where the subclavian and carotid arteries leave.

The hypogastric arteries branch off from the internal iliacarteries and become umbilical arteries when they enter the umblical cord. They return blood to the placenta. This is the only vessel inthe fetus which carries unmixed blood. 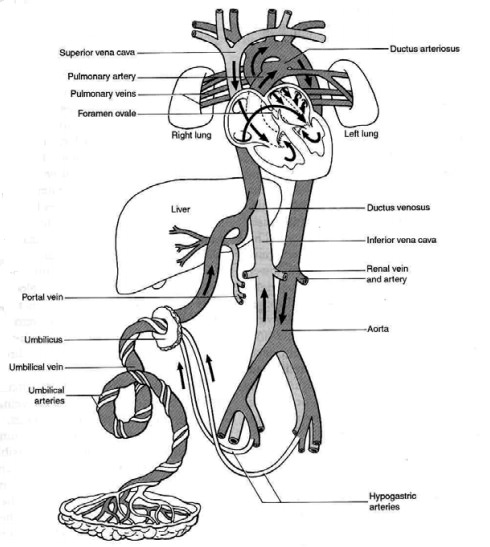 The cessation of the placenta circulation results in the collapse of the umbilical vein, the ductus venosus and the hypogastric arteries. These vesels after collapse change to the following structure.

The umbilical vein → the ligamentaum teres

The ductus venosus → the ligamentum venosum

The ductus arteriosus → the ligamentum arteriousm

The foramen ovale → the Fossa ovalis

The placenta is completley formed and functioning from 10weeks after fertilization. Between 12 and 20 weeks gestation the placenta weighs more than the fetus.Fetal blood, low in oxygen, is pumped by the fetal heart towards the placenta along the umblical arteries. Having absorbed oxygen the blood is returned to the fetus via the umblical vein.

Appearance of the Placenta at Term

The placenta measures about 20 cm in diameter and 2.5cm thick from its center. It weighs approximately one sixth of the baby’s weight at term. It has two surfaces.

i.                     The maternal surface maternal blood gives this surface a dark red colour and part of the basal decidua will have beenseparated with it. The surface is arranged in about 20 lobes which are separated by sulci

Amnion.-The inner layer of the aminotic sac containing anaminotic fluid and cover the fetal surface of the placenta and are what give the placenta its typical shiny appearance.

Protects the fetus from any infection and the amniontic fluid is a clear, pale straw in colour.It secreted by the amnion and fetal urine also contributes to the volume from the 10th weeks of the gestation on wards.The total amount of amniotic fluid is about 1 litter and diminished to 800ml at 38 weeks of gestation (term). If the total amount exceeds 1500 ml, the condition is known as polyhdramnous and if less than 300ml it is known as oligohydraminous. It constitutes 99% water and the remaining 1% is dissolved organic maters including substances and waste products.