Anatomical Varations of the Placenta and the Cord

Succenturiate lobe of placneta: A small extra lobe is present, separate from the main placenta and joined to it by blood vessles which ran through the memebrane to reach it.

Anatomical Varations of the Placenta and the Cord

A small extra lobe is present, separate from the main placenta and joined to it by blood vessles which ran through the memebrane to reach it.

The danger is that this small lobe may be retained in utroafter delivery, and if it is not removed it may lead to haemorrhage and infection.

Identification On inspection, the placenta will appear torn atthe edge, or torn blood vessles may extend beyond the edge of the placenta.

Circumvallate placenta In this situation an opaque ring isseen on the fetal surface. It is formed by a doubling back of the chorion and amnion.

Danger may result in the memberanes leaving the placentanearer the center instead of at the adge as usually.

Battledore inseration of the cord The cord in this case isattached at the very edge of the placenta in the manner of the table tennis bat.

Danger Likely it is detached up on applying traction duringactive management of the third stage of labour.

Velamentous insertion of the cord It is inserted into thememberans some distance from the edge of the placenta. The umblical vessles run through the memberanous frorm the cord to the placneta.

Bipartite Placenta Two complete and separate lobes arepresent, each with a cord leaving it. The bipartite cord joins a short distance from the two parts of the placenta.

A tripartite Placenta is similar but with three distinct lobes 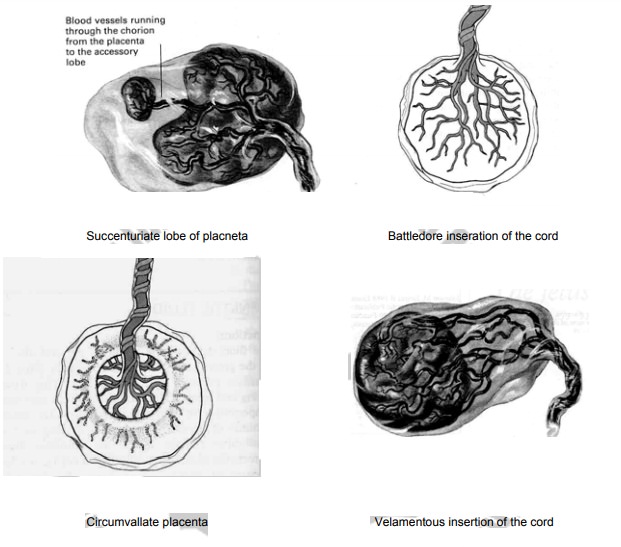 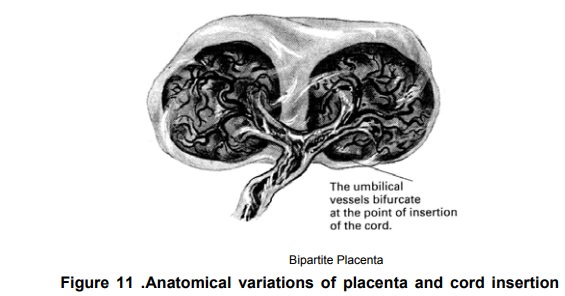 Placental infarction occurs when the blood supply to an area of the placenta is blocked and tissue necrosis results. It appears most commonly on the maternal surfaces and most often associated with vascular disease of the utero- placental unit secondary to maternal hypertension.

As the infarct at area becomes necrotic, fetal circulation is reduced because blood flow through the placenta will decrease. However, if the circulation through the rest of the organ is sufficient, a fetus may survive when as much as 20% to 30% of the placenta is infracted. Placental infractions can be treated.

Placental tumors (Haemongiomata of the Placenta)

These tumors are relatively common, being found in approximately 1 percent of all placentas. Most tumors are small and without clinical significance but a few are large and associated with hydraminious, antepartum hemorrhage and premature labour.

The umblical cord or funis extends from the fetus to the placenta and transmits the umblical blood vessles, two arteries and one vein. These are enclosed and protected by Wharton’s jelly, (a gelatious substance formed from mesoderm). The whole cord is covered in a layer of amnion continuous with that covering the placenta. The length of the average cord is about 50cm. A cord is considered to be short when it measures less than 40cm.