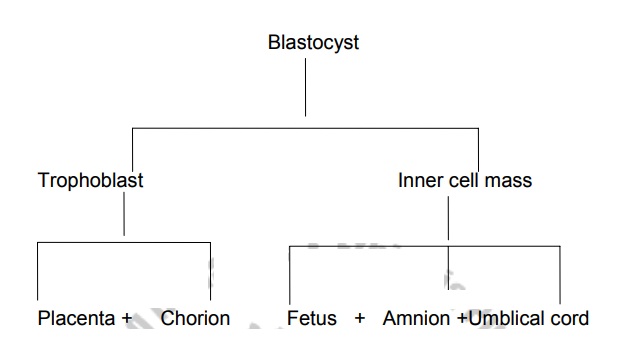 After fertilization the ova passes through the fallopian tube and reaches the uterus 3 or 4 days later.

After fertilization the ova passes through the fallopian tube and reaches the uterus 3 or 4 days later. Division takes place and the fertilized ovum divides into two cells, and then into four, then eight, and sixteen and soon until a cluster of cells is formed known as the morula.

These divisions occur quite slowly about once every 12 hours. Next, fluid filled the cavity or blastocele appears in the morula which now becomes known as the blastocyst.

Around the out side of the blastocyst there is a single layer of cell known as the trophoblast while the remaining cells are clumped together at one end forming the inner cell mass. The trophoblast will form the placenta and chorion, while the inner cell becomes the fetus, umbilical cord and the amnion. Embedding of the blastocyst is normally completed by the 11th day after ovulation and the endometrium closes over it completely.

This is the name given to the endometrium during pregnancy.

Three layers are found in decidua.

·              The functional layer consists of tortus glands which are rich in secretions.

Those trophoblastic cells differentiate into layers, the outer syncitiotrophoblast (syncitium), and inner cytotrophoblast and below this, a layer of mesoderm or primitive mesenchyme.

The syncitiotrophoblast is composed of nucleated protoplasm which is capable of breaking down tissue as in the process of embedding.

The cytotrophoblast is a well defined single layer of cells which produces a hormone known as human chorinic gonadotrophin (HCG). 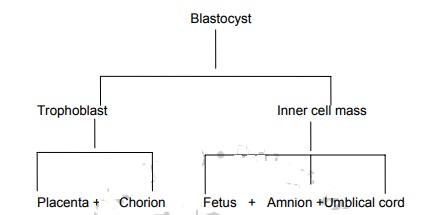 While the trophroblast is developing into the placenta, which will nourish the fetus, the inner cell mass is forming the fetus itself. The cells differentiate into three layers, each of which will form particular parts of the fetus.

·        The ectoderm mainly forms the skin and nervous system

·        The mesoderm forms bones and muscles and also the heart and blood vessles, including those which are in placenta.

·        The endoderm forms mucous memberanes and glands. The three layers together are known as the embryonic plate.