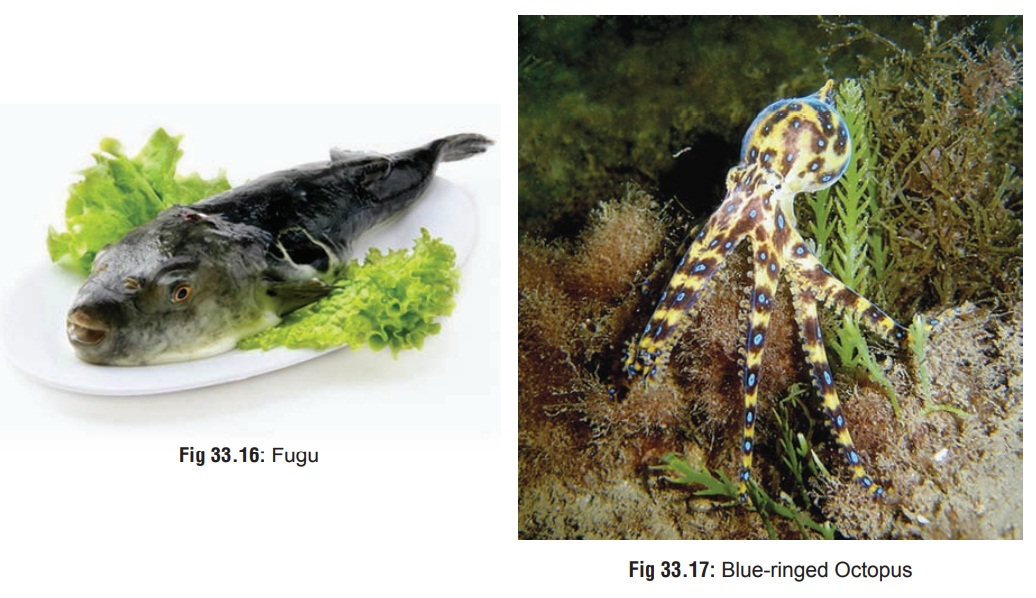 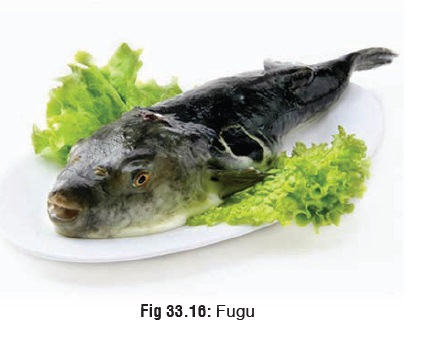 ·            Blue-ringed octopus (Hapalochlaena maculosa) (Fig 33.17): of Australia and Japan is the only known species in which tetrodotoxin has been found in extracts of venom glands, in contrast to being found in the skin, muscle, liver, ovaries, and eggs of other species. 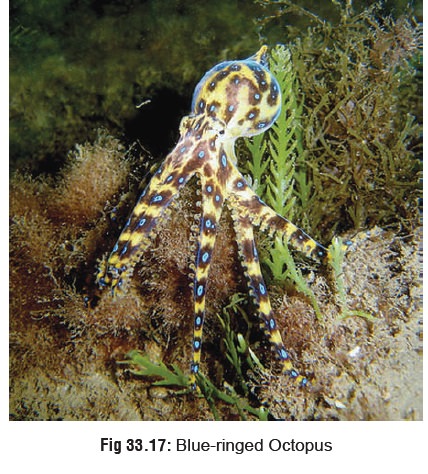 ·            Snails: In a study of several outbreaks of tetrodotoxin- associated snail poisoning in Zhoushan city, China, the following snail species were identified as culprits: Zeuxis samiplicutus, Zeuxis siguinjorensis, Zeuxis variciterus, and Z. succinctus. In all the cases, the snails were steamed, boiled, or fried. The incubation period ranged from 5 minutes to 11 hours, and the time from a patient’s inges-tion of snails to full recovery ranged from 30 minutes to 48 hours.

Tetrodotoxin (TTX) is a potent, heat-stable, water soluble, non-protein aminoperhydroquanizole neurotoxin concen-trated mainly in the skin, liver, ovary, and intestine of the fish. The highest concentration is found in the ovaries, and hence the female is most poisonous, especially if eaten during the spawning season.

Tetrodotoxin affects myelinated nerve fibres throughout the entire length of the axon by lowering the conduction of sodium currents at nodes of Ranvier. It is a selective and potent sodium channel blocker. TTX blocks the action potential without any effect on resting membrane potential, or the resting membrane resistance.

It blocks nerve and muscle conduction. Its action is thought to interfere with the increase in sodium permeability associated with nerve excitation, with changing potassium permeability.

Onset is usually within 4 to 6 hours, but may be delayed. Oral paraesthesia is usually the initial symptom of puffer fish poisoning. Death may occur within the first 6 to 24 hours. Prognosis is good if the patient survives the first 24 hours.

·     Poisoning is caused by ingestion of the flesh, viscera, ovaries, or skin containing tetrodotoxin (TTX). The highest concentration is in the viscera. Body musculature is usually free of poison.

·            Main features of poisoning include headache, sweating, dysaesthesias, and paraesthesias of lips, tongue, mouth, face, fingers, and toes. Circumoral tingling may include the tongue and inner surface of the mouth, and generally occurs within 10 to 45 minutes of ingestion.

·            Blurred vision, aphonia, and dysphagia may be seen as muscle paralysis progresses. Miosis is an early effect of TTX poisoning, but later there is mydriasis.

·            Some cases of seizures have been reported in TTX poison-ings. If at all they occur, seizures generally manifest only in the course of severe TTX poisonings

·            A rare “locked-in” syndrome has been described with tetro- dotoxic poisoning, in which the patient appears completely flaccid, but remains conscious.

·            Mouse bioassay: Laboratory determination of tetrodotoxin (TTX) is not commonly available. Potency of TTX must be done by bioassay; identification may be done with thin layer chromatography.

·            Use of electrophoresis, HPLC, LC/MS, etc., have also been reported by various investigators. A relatively new immunoassay method, using a highly specific monoclonal antibody (MAb) and immunoaffinity column chromatog- raphy, has recently been developed for the isolation and identification of TTX from urine samples of poisoned patients. This method is performed in combination with fluorometric HPLC.

Because of the differences in susceptibility, and unpredictability of an individual’s course, at least 24 hours of observation is recommended in every patient.

·      Decontamination: Activated charcoal may be useful.

·      Artificial ventilation should be implemented if necessary.

·      Haemodialysis may be effective in the treatment of tetro-dotoxin poisoning, because the toxin has low molecular weight, is water soluble, and is not significantly bound to protein.