Chemical contaminants of food include heavy metals, pesticides, and food additives. The last mentioned will be discussed in this section, while the other two entities are discussed elsewhere. 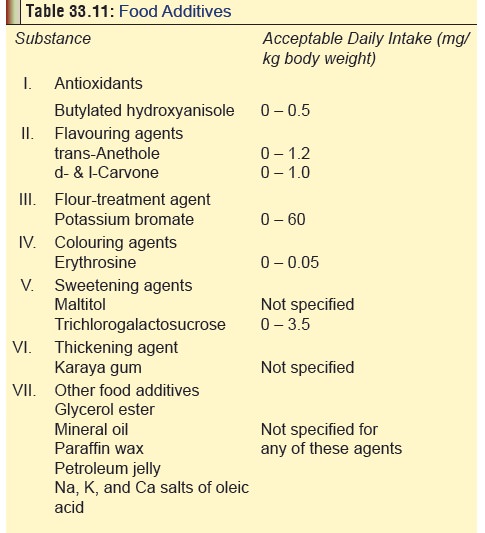 ■■ MSG has been used to treat patients with hyperammon-aemia in conditions such as hepatic encephalopathy.

·     Glutamate, a major building block of proteins, is released during breakdown of a protein molecule, and occurs naturally in many foods (meat, milk, mushrooms, cheese, tomatoes, etc.). Monosodium glutamate (MSG) is the monosodium salt of L-glutamic acid. It is produced by the following processes:

o     Fermentation of carbohydrate sources such as sugar beet molasses.

o     By action of Micrococcus glutamicus upon a carbohy-drate, and subsequent partial neutralisation.

·              Ingestion of large quantities of MSG is said to cause the Chinese restaurant syndrome ( CRS), though doubts havebeen expressed of late on the role of MSG in the aetiology of the syndrome.

·              Features include burning or tingling sensation and numb-ness of face, trunk, and upper limbs, weakness, dizziness, syncope, flushing, lacrimation, sweating, chest pain, head-ache, nausea, gastric distress, and rarely bronchospasm and angioedema. In young children, a convulsive attack may occur (shudder attack). Symptoms resolve on their own, and rarely last for more than half to one hour.

·              Treatment is symptomatic and supportive. Gastrointestinal decontamination is generally not indicated after an acute inges-tion. Toxicity is very unlikely.

·              The syndrome can generally be prevented by prior ingestion of “safe foods” such as a glass of milk or a slice of cottage cheese. The following preventive measures have been suggested for MSG-sensitive individuals:

o     Phone ahead and request food without MSG.

o     Eat a snack before you go: cottage cheese or a glass of milk.

o     Eat only freshly prepared, broiled, or sauteed meats or fish (without sauces or seasoning).

o     Drink a cup of coffee along with the meal, or soon thereafter.

Of late, there are doubts being raised about the actual role of MSG in human illness. The USFDA has studied adverse reac- tion reports and other data concerning MSG’s safety for several years, and believes that while some sensitive people can have mild and transitory reactions when they consume significant amounts of MSG, it is still a safe food ingredient for the general population. In 1995, a report from the Federation of American Societies for Experimental Biology (FASEB) affirmed the FDA’s belief that MSG and related substances are safe food ingredients for most people when eaten at moderate levels. This report identified short-term reactions known as ‘MSG Symptom Complex’ in two groups of people. Individuals in the first group suffer a reaction after eating large doses (3 gm or more per meal) of MSG, particularly on an empty stomach. In the second group, individuals with severe and poorly controlled asthma may, in addition, experience difficulty in breathing.

Although some studies have reported MSG-induced asthma attacks in asthmatic patients, several other studies could not confirm their results.