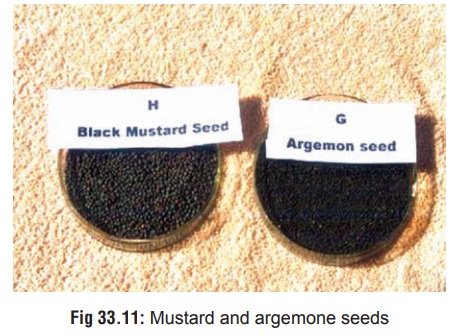 This is a robust, prickly, annual or perennial herb belonging to family Papaveraceae, which grows up to 4 feet in height, bearing thistle-like leaves and yellowish flowers ( Fig 33.9) (Fig 33.10). The spreading branches are prickly and contain a yellow sap. The leaves are pinnately cut, while the flowers are solitary, showy, and yellowish. The fruit is a prickly capsule, and bears many small seeds which are tiny and brownish black. They resemble the dark variety of mustard (Brassica nigra) (Fig 33.11).* 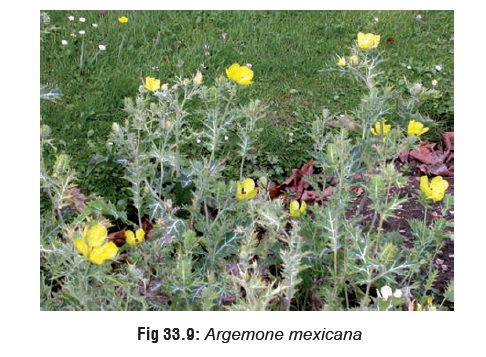 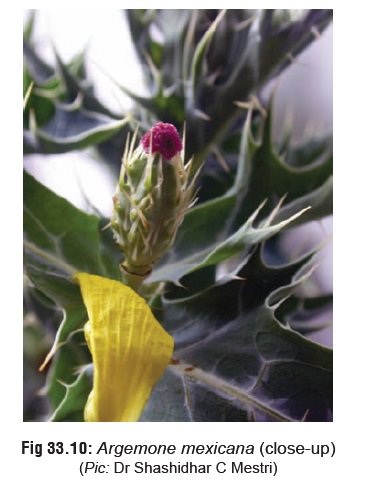 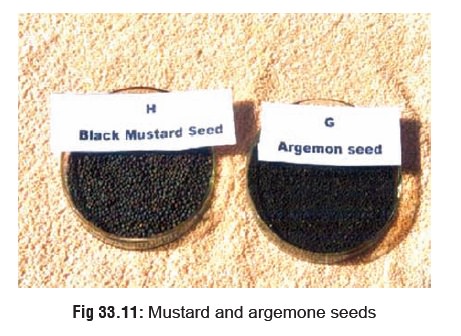 Seed and expressed oil are quite toxic. Leaves are also toxic (to a lesser degree).

They are both physiologically active benzophenanthridine alkaloids. In addition, other alkaloids of lesser importance are present, such as protopine, berberine, chelerythrine, isoquino-line, and coptisine.

·     Liver, heart, kidneys, and lungs are the target organs of argemone alkaloids, and it is postulated that membrane destruction is the probable mode of acion. The exact mecha-nism is not well understood.

·     The chief effects of argemone are on the blood vessels which become abnormally permeable, resulting in the leakage of protein-rich plasma components into the extravascular compartment leading to hypovolaemia and reduced plasma osmotic pressure. Decrease in renal blood flow sets into motion a compensatory mechanism through the activation of renin-angiotensin-aldosterone system, and retention of sodium and water. Conservation of fluid and salt compensates for the expanded vascular capacity and increased permeability in mild cases.

·      However in severe cases, these mechanisms become inadequate because fluid and salt conserved by kidneys are poorly held in the vascular compartment due to low plasma osmotic pressure. As a result, a state of relative hypovolaemia exists, which provides a constant stimulus for renal conservation of salt and water, which in turn causes marked anasarca.

·      Exudation of protein-rich fluid from pulmonary capillaries results in pulmonary oedema which gets compounded by right-sided cardiac failure. As a result, congestive hepato- megaly develops. Similar mechanisms underlie effusions in the pleural, pericardial, and peritoneal cavities.

·      Mechanisms of toxicity of argemone alkaloids are summarised in Table 33.8. 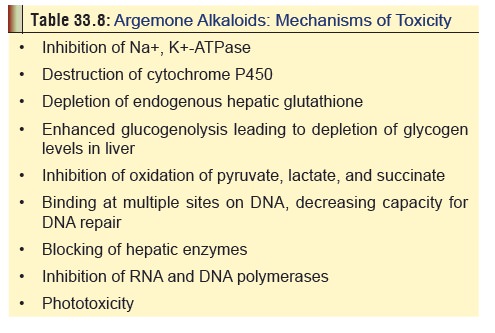 o     Blood urea and creatinine may be raised.

o     Adulteration of light yellow mustard seeds with argemone seeds can be easily made out by visual inspection.

o     Adulteration of dark mustard seeds can be detected by placing the seeds in normal saline. Mustard seeds will sink, while argemone seeds will float

·              Nitric acid test: 5 ml oil is shaken with an equalvolume of HNO3. On standing, the acid layer turns yellow, orange, or crimson, depending on the amount of argemone oil. This test has a high incidence of false positives, and therefore a positive result must always be confirmed by other tests.

·              Ferric chloride test: 2 ml oil is mixed with 2 mlconcentrate HCL, and heated in a water bath at 35° C for 2 minutes. 8 ml ethanol is then added, and heating continued for 1 more minute. Finally, 2 ml ferric chlo-ride is added, and the mixture heated for a further 10 minutes. Positive result is indicated by an orange-red precipitate.

·      Withdrawal of contaminated oil from the diet.

·      Supplements of calcium, antioxidants (vitamins C & E), and B vitamins.

·      Most patients recover with treatment in about 3 months. Mortality is around 5%. Post-recovery, pedal oedema may take up to 5–6 months to resolve completely.

·      The first case of epidemic dropsy was reported in 1877 from Calcutta (Kolkata). Since then, numerous cases usually in the form of periodic epidemics, have occurred not only in India, but also in some other countries such as South Africa, Myanmar, Mauritius, Madagascar, and the Fiji islands. It is perhaps significant that in most of these countries, a sizeable chunk of the population comprises people of Indian origin.

·     Epidemic dropsy is in many ways a uniquely Indian syndrome, and more so a North Indian syndrome. The outbreaks have mostly been confined to West Bengal, Bihar, Madhya Pradesh, Orissa, Uttar Pradesh, Gujarat, Delhi, and Maharashtra. The most recent epidemic occurred in 1998 in Delhi, claiming 65 lives out of a total number of 2552 cases reported from all across the state.

·     Almost all the outbreaks have been due to consumption of mustard oil or other vegetable oils contaminated with argemone oil (except the South African epidemic which occurred due to adulteration of wheat flour with argemone seeds). South Indian states have been largely spared because mustard oil is not very popular here.