Temperature - Elements of Weather and Climate

Temperature is a measure of the warmth of an object expressed in terms of Celsius or Fahrenheit, measured with thermometer.

Temperature is a measure of the warmth of an object expressed in terms of Celsius or Fahrenheit, measured with thermometer. Sun is the chief source of energy for the Earth.

The atmosphere acts as an insulator and maintains the temperature of the earth. Without atmosphere, the earth would experience great extremes of temperatures during day and night. Some of the processes that are responsible for atmospheric heat are radiation, Conduction, Convection and Advection. 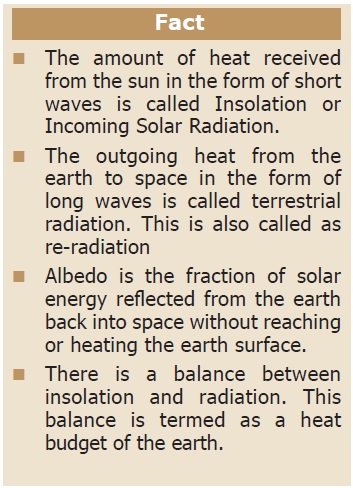 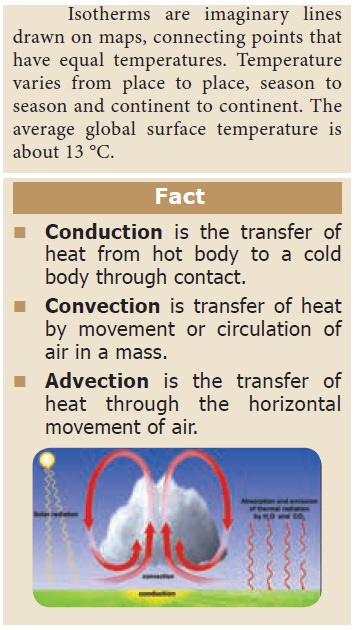 Based on the amount of insolation received from the sun and the heat, Earth is classified into three heat zones namely torrid zone, temperate zone and frigid zone.

This largest thermal zone covers almost 50% of the earth's surface. It is located between the Tropic of Cancer (23½°N) and Tropic of Capricorn (23½°S). Torrid Zone experiences vertical sun rays almost throughout the year and is hot. 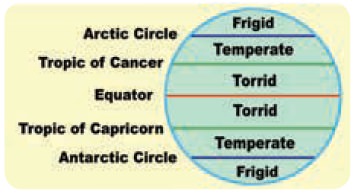 The Frigid Zone is found between Arctic Circle (66½°N) and North Pole (90° N)in the northern hemisphere and stretches out between Antarctic Circle (66½° S ) and South Pole (90°S) in the southern hemisphere. The sun’s rays fall slanting in this zone. These are the coldest regions of the world. The surface remains permanently frozen under thick snow.