Structure of the Atmosphere

The atmosphere is thick near the earth surface and thins out until it eventually merges with space.

Structure of the Atmosphere

The atmosphere is thick near the earth surface and thins out until it eventually merges with space. The five atmospheric layers are: Troposphere, stratosphere, Mesosphere, Thermosphere and Exosphere. 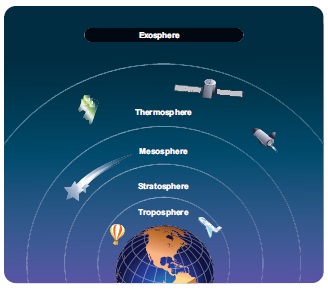 The lowest layer of the atmosphere is the troposphere. The Greek word ‘tropos’ means ‘turn’ or change. The layer extends up to 8 kms at the poles and up to 18 kms at the Equator. The temperature decreases with increasing height. Almost all weather phenomenon take place in this layer. Hence it is called weather making layer. The upper limit of the troposphere is called as tropopause.

Stratosphere lies above the troposphere. It extends to a height of about 50km above earth surface. Since this layer is a concentration of ozone molecules, it is also referred as ozonosphere. The temperature increases with increase in height in this layer. Large jet planes normally fly here. The upper limit of the stratosphere is called as stratopause.

Mesosphere extends between 50km and 80km. The temperature increases with increasing height. Radio waves transmitted from earth are reflected back to earth from this layer. Most of the meteors nearing the earth, get burned here. The upper most limit of the mesosphere is the mesopause. 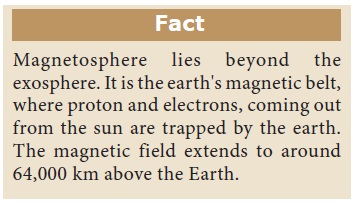 The uppermost layer of the atmosphere is called exosphere. This layer is extremely rarefied with gases and gradually merges with the outer space. This zone is characterized by aurora Australis and aurora borealis. 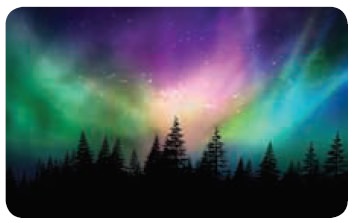 Weather and climate are the terms that are related to the atmospheric conditions. Weather denotes the way the atmosphere behaves every day and climate reveals the average of weather conditions over relatively long periods of time. The difference between the two may be clearly understood with the following table. 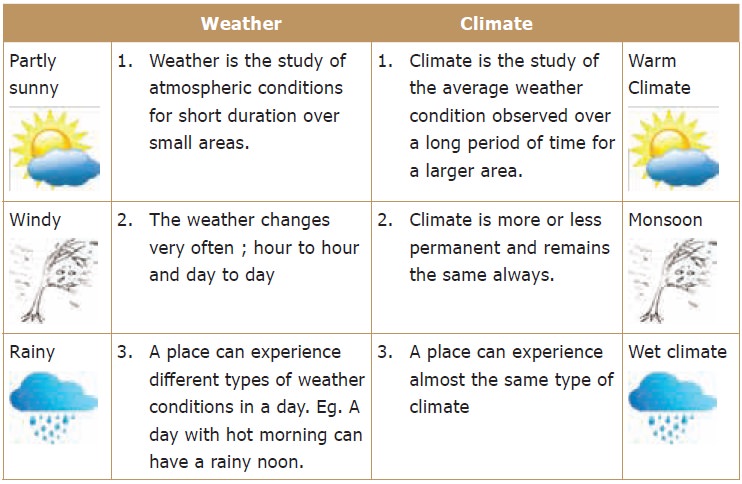 2. There are many factors that influence weather and climate.

Distance from the Equator 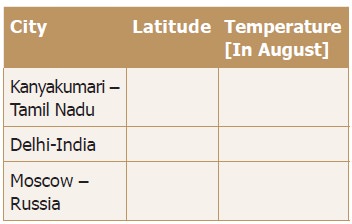 Altitude refers to the height above sea level. The temperature decreases at the rate of 1° C for every 165 mt of height. 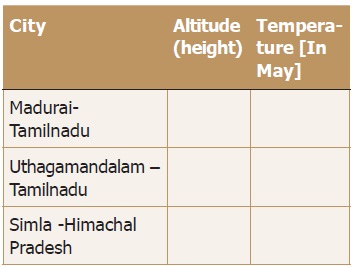 This is called Normal lapse rate. So, places at the higher altitude have a lower temperature.

Nearness to the sea: 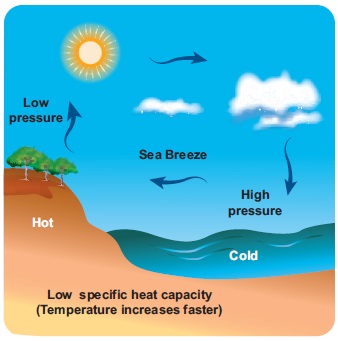 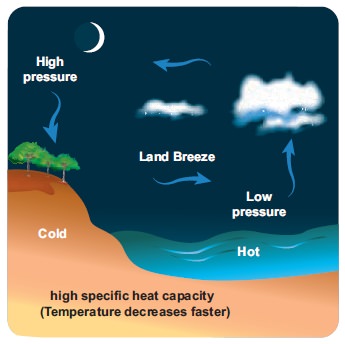 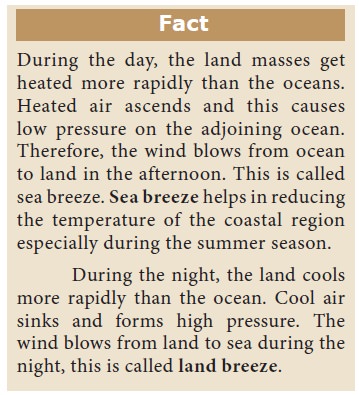 Nature of the Prevailing Winds

The winds change the climate of a place based on, from where they blow. When wind blows from a warm region, it makes the place warm and cold, when blows from a colder region. The on-shore winds cause rainfall making the place cool whereas the off-shore winds bring dry weather.

The location of the mountains influence the climate of a place. The mountain chains act as natural barrier for the wind. Sometimes they prevent the entry of cold winds into the country or the escape of monsoon winds, thus having a great influence over the climate. 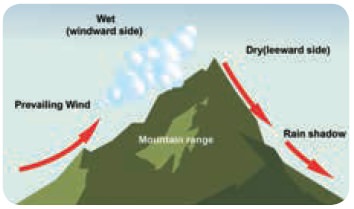 Clouds reflect a large amount of radiation from the sun. This prevents the entry of heat to the earth’s surface. So, in areas generally of cloudless sky like the deserts, temperature is very high. On the other hand under cloudy sky, the temperature is low.

The trees release water vapour into the air and makes it cool. Thus forest areas have lower range of temperature throughout the year in contrast to non-forested areas.