Clouds - Elements of Weather and Climate

Large amount of water evaporates each day from the surface of the sea. This is the principal source of atmospheric moisture.

Large amount of water evaporates each day from the surface of the sea. This is the principal source of atmospheric moisture. Cool moisture laden air, gets collected around particles like dust, salt content from the sea, smoke etc., and forms clouds. Sometimes, mixing of warmer and cooler air also produces clouds. A visible mass of condensed water vapour floating in the air above the ground level is called a cloud. The three layers of atmosphere such as troposphere, stratosphere and mesosphere are specific locations of clouds.

According to their height, clouds are classified into the following types

These major types of clouds are further divided into different types on the basis of shape and structure.

Cirrus:Detachedcloudsintheformof white delicate fibrous silky filaments formed at the high sky (8000 meters to 12000 meters) are called Cirrus clouds. These clouds are dry and do not give rainfall. 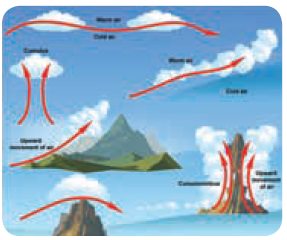 Nimbo stratus: These are clouds of dark colour very close to the ground surface associated with rain, snow or sleet.

Strato-cumulus:-Greyorwhitishlayer of non-fibrous low clouds found in rounded patches at an height of 2500 to 3000 metres, associated with fair or clear weather

Cumulus:- Dome-shaped with a flat base often resembling a cauliflower, associated with fair weather