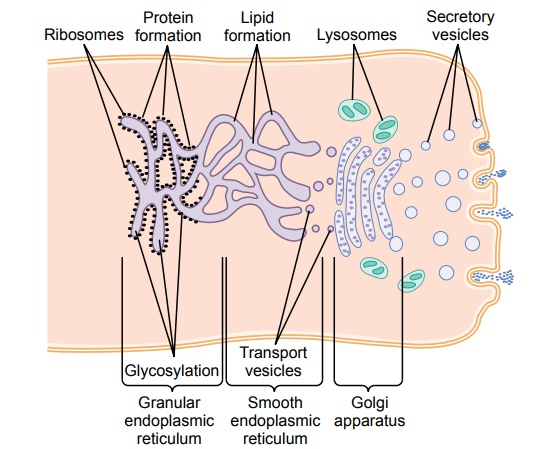 The extensiveness of the endoplasmic reticulum and the Golgi apparatus in secretory cells has already been emphasized.

Specific Functions of the Endoplasmic Reticulum

The extensiveness of the endoplasmic reticulum and the Golgi apparatus in secretory cells has already been emphasized. These structures are formed primarily of lipid bilayer membranes similar to the cell membrane, and their walls are loaded with protein enzymes that catalyze the synthesis of many substances required by the cell.

Proteins Are Formed by the Granular Endoplasmic Reticulum.

Synthesis of Lipids by the Smooth Endoplasmic Reticulum.

To keep the endoplasmic reticulum from growing beyond the needs of the cell, small vesicles called ERvesicles or transport vesicles continually break awayfrom the smooth reticulum; most of these vesicles then migrate rapidly to the Golgi apparatus.

1. It provides the enzymes that control glycogen breakdown when glycogen is to be used for energy.

2. It provides a vast number of enzymes that are capable of detoxifying substances, such as drugs, that might damage the cell. It achieves detoxification by coagulation, oxidation, hydrolysis, conjugation with glycuronic acid, and in other ways.

Specific Functions of the Golgi Apparatus Synthetic Functions of the Golgi Apparatus. Although themajor function of the Golgi apparatus is to provide additional processing of substances already formed in the endoplasmic reticulum, it also has the capability of synthesizing certain carbohydrates that cannot be formed in the endoplasmic reticulum. This is especially true for the formation of large saccharide polymers bound with small amounts of protein; the most impor-tant of these are hyaluronic acid and chondroitin sulfate. 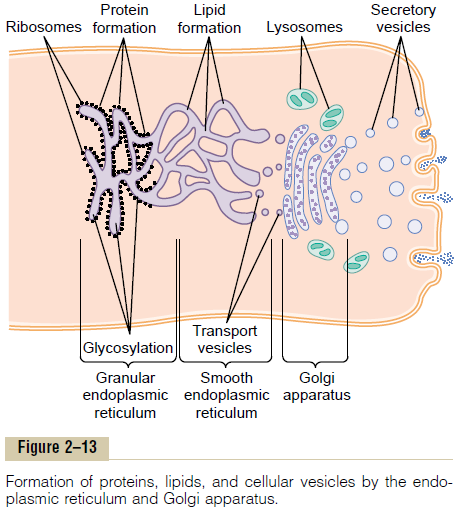 Types of Vesicles Formed by the Golgi Apparatus—Secretory Vesicles and Lysosomes. In a highly secretory cell, thevesicles formed by the Golgi apparatus are mainly secretory vesicles containing protein substances thatare to be secreted through the surface of the cell mem-brane. These secretory vesicles first diffuse to the cell membrane, then fuse with it and empty their sub-stances to the exterior by the mechanism called exo-cytosis. Exocytosis, in most cases, is stimulated by theentry of calcium ions into the cell; calcium ions inter-act with the vesicular membrane in some way that is not understood and cause its fusion with the cell mem-brane, followed by exocytosis—that is, opening of the membrane’s outer surface and extrusion of its contents outside the cell.

Some vesicles, however, are destined for intracellu-lar use.

Use of Intracellular Vesicles to Replenish Cellular Membranes.

In summary, the membranous system of the endo-plasmic reticulum and Golgi apparatus represents a highly metabolic organ capable of forming new intra-cellular structures as well as secretory substances to be extruded from the cell.