Ingestion by the Cell - Endocytosis - Functional Systems of the Cell 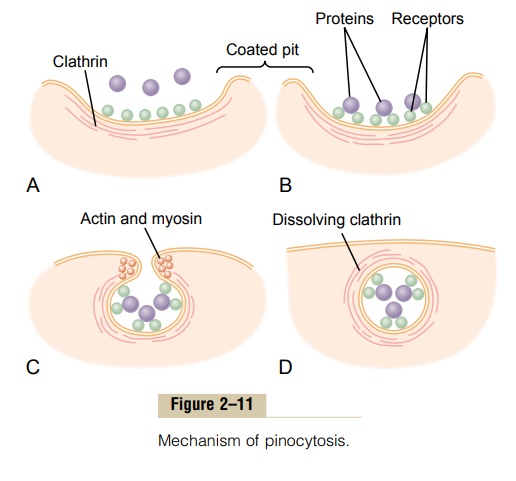 If a cell is to live and grow and reproduce, it must obtain nutrients and other substances from the sur-rounding fluids. Most substances pass through the cell membrane by diffusion and active transport.

If a cell is to live and grow and reproduce, it must obtain nutrients and other substances from the sur-rounding fluids. Most substances pass through the cell membrane by diffusion and active transport.

Very large particles enter the cell by a specialized function of the cell membrane called endocytosis. The principal forms of endocytosis are pinocytosis and phagocytosis. Pinocytosis means ingestion of minuteparticles that form vesicles of extracellular fluid and particulate constituents inside the cell cytoplasm. Phagocytosis means ingestion of large particles, such as bacteria, whole cells, or portions of degenerating tissue.

Pinocytosis. Pinocytosis occurs continually in the cellmembranes of most cells, but it is especially rapid in some cells. For instance, it occurs so rapidly in macrophages that about 3 per cent of the total macro-phage membrane is engulfed in the form of vesicles each minute. Even so, the pinocytotic vesicles are so small—usually only 100 to 200 nanometers in diame-ter—that most of them can be seen only with the elec-tron microscope.

Pinocytosis is the only means by which most large macromolecules, such as most protein molecules, can enter cells. In fact, the rate at which pinocytotic vesi-cles form is usually enhanced when such macro-molecules attach to the cell membrane. 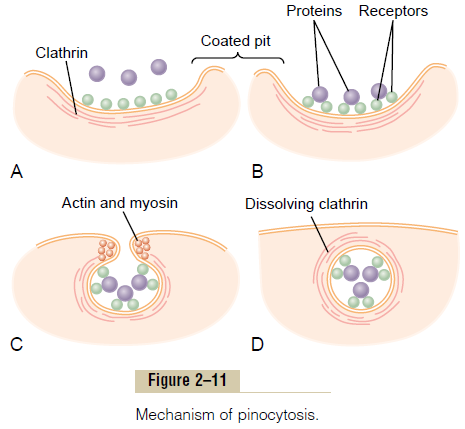 Figure 2–11 demonstrates the successive steps of pinocytosis, showing three molecules of protein attaching to the membrane. These molecules usually attach to specialized protein receptors on the surface of the membrane that are specific for the type of protein that is to be absorbed. The receptors generally are concentrated in small pits on the outer surface of the cell membrane, called coated pits. On the inside of the cell membrane beneath these pits is a latticework of fibrillar protein called clathrin, as well as other pro-teins, perhaps including contractile filaments of actin and myosin. Once the protein molecules have bound with the receptors, the surface properties of the local membrane change in such a way that the entire pit invaginates inward, and the fibrillar proteins sur-rounding the invaginating pit cause its borders to close over the attached proteins as well as over a small amount of extracellular fluid. Immediately thereafter, the invaginated portion of the membrane breaks away from the surface of the cell, forming a pinocytoticvesicle inside the cytoplasm of the cell.

What causes the cell membrane to go through the necessary contortions to form pinocytotic vesicles remains mainly a mystery.This process requires energy from within the cell; this is supplied by ATP, a high-energy substance discussed later. Also, it requires the presence of calcium ions in the extra-cellular fluid, which probably react with contractile protein filaments beneath the coated pits to provide the force for pinching the vesicles away from the cell membrane.

Phagocytosis. Phagocytosis occurs in much the sameway as pinocytosis, except that it involves large particles rather than molecules. Only certain cells have the capability of phagocytosis, most notably the tissue macrophages and some of the white blood cells.

Phagocytosis is initiated when a particle such as a bacterium, a dead cell, or tissue debris binds with receptors on the surface of the phagocyte. In the case of bacteria, each bacterium usually is already attached to a specific antibody, and it is the antibody that attaches to the phagocyte receptors, dragging the bac-terium along with it. This intermediation of antibodies is called opsonization.

Phagocytosis occurs in the following steps:

1. The cell membrane receptors attach to the surface ligands of the particle.

2. The edges of the membrane around the points of attachment evaginate outward within a fraction of a second to surround the entire particle; then, progressively more and more membrane receptors attach to the particle ligands. All this occurs suddenly in a zipper-like manner to form a closed phagocytic vesicle.

3. Actin and other contractile fibrils in the cytoplasm surround the phagocytic vesicle and contract around its outer edge, pushing the vesicle to the interior.

4. The contractile proteins then pinch the stem of the vesicle so completely that the vesicle separates from the cell membrane, leaving the vesicle in the cell interior in the same way that pinocytotic vesicles are formed.