Comparison of the Animal Cell with Precellular Forms of Life 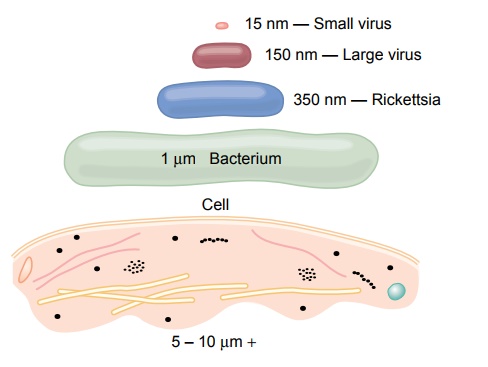 Many of us think of the cell as the lowest level of life.

Comparison of the Animal Cell with Precellular Forms of Life

Many of us think of the cell as the lowest level of life. However, the cell is a very complicated organism that required many hundreds of millions of years to develop after the earliest form of life, an organism similar to the present-day virus, first appeared on earth. Figure 2–10 shows the relative sizes of (1) the smallest known virus, (2) a large virus, (3) a rickettsia,  (4) a bacterium, and (5) a nucleated cell, demonstrat-ing that the cell has a diameter about 1000 times that of the smallest virus and, therefore, a volume about 1 billion times that of the smallest virus. Correspond-ingly, the functions and anatomical organization of the cell are also far more complex than those of the virus.

The essential life-giving constituent of the small virus is a nucleic acid embedded in a coat of protein. This nucleic acid is composed of the same basic nucleic acid constituents (DNA or RNA) found in mammalian cells, and it is capable of reproducing itself under appropriate conditions. Thus, the virus propagates its lineage from generation to generation and is therefore a living structure in the same way that the cell and the human being are living structures.

As life evolved, other chemicals besides nucleic acid and simple proteins became integral parts of the organism, and specialized functions began to develop in different parts of the virus. A membrane formed around the virus, and inside the membrane, a fluid matrix appeared. Specialized chemicals then devel-oped inside the fluid to perform special functions; many protein enzymes appeared that were capable of catalyzing chemical reactions and, therefore, deter-mining the organism’s activities. 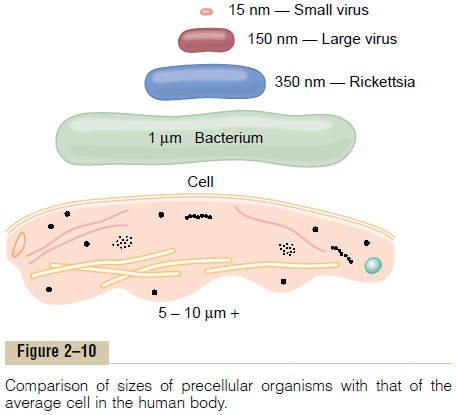 In still later stages of life, particularly in the rick-ettsial and bacterial stages, organelles developed inside the organism, representing physical structures of chemical aggregates that perform functions in a more efficient manner than can be achieved by dispersed chemicals throughout the fluid matrix.

Finally, in the nucleated cell, still more complex organelles developed, the most important of which is the nucleus itself. The nucleus distinguishes this type of cell from all lower forms of life; the nucleus pro-vides a control center for all cellular activities, and it provides for exact reproduction of new cells genera-tion after generation, each new cell having almost exactly the same structure as its progenitor.