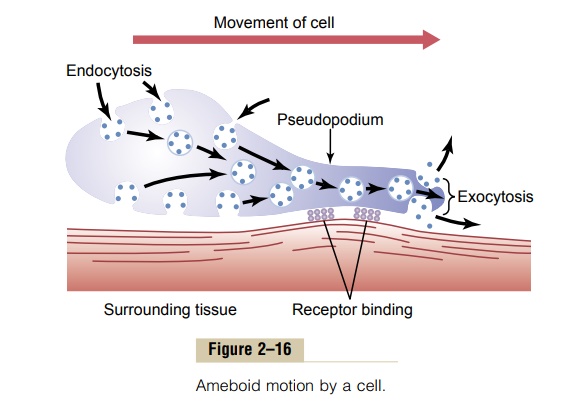 By far the most important type of movement that occurs in the body is that of the muscle cells in skeletal, cardiac, and smooth muscle, which constitute almost 50 per cent of the entire body mass. Two other types of movement—ameboid locomotion and ciliary movement—occur in other cells.

By far the most important type of movement that occurs in the body is that of the muscle cells in skeletal, cardiac, and smooth muscle, which constitute almost 50 per cent of the entire body mass. Two other types of movement—ameboid locomotion and ciliary movement—occur in other cells.

Mechanism of Ameboid Locomotion. Figure 2–16 shows thegeneral principle of ameboid motion. Basically, it results from continual formation of new cell membrane at the leading edge of the pseudopodium and continual absorption of the membrane in mid and rear portions of the cell. Also, two other effects are essential for forward movement of the cell. The first effect is attach-ment of the pseudopodium to surrounding tissues so that it becomes fixed in its leading position, while the 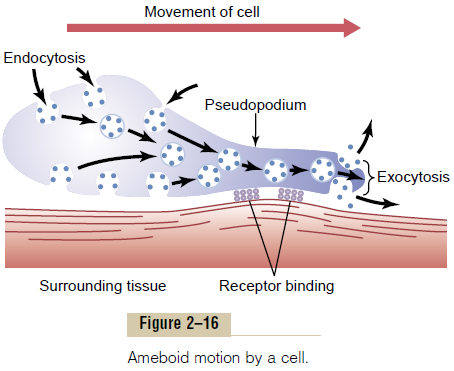 remainder of the cell body is pulled forward toward the point of attachment. This attachment is effected by receptor proteins that line the insides of exocytotic vesi-cles. When the vesicles become part of the pseudopodial membrane, they open so that their insides evert to the outside, and the receptors now protrude to the outside and attach to ligands in the surrounding tissues.

The second essential effect for locomotion is to provide the energy required to pull the cell body in the direction of the pseudopodium. Experiments suggest the following as an explanation: In the cytoplasm of all cells is a moderate to large amount of the protein actin. Much of the actin is in the form of single molecules that do not provide any motive power; however, these poly-merize to form a filamentous network, and the network contracts when it binds with an actin-binding protein such as myosin. The whole process is energized by the high-energy compound ATP. This is what happens in the pseudopodium of a moving cell, where such a network of actin filaments forms anew inside the enlarging pseudopodium. Contraction also occurs in the ectoplasm of the cell body, where a preexisting actin network is already present beneath the cell membrane.

Types of Cells That Exhibit Ameboid Locomotion. The mostcommon cells to exhibit ameboid locomotion in the human body are the white blood cells when they move out of the blood into the tissues in the form of tissuemacrophages. Other types of cells can also move byameboid locomotion under certain circumstances. For instance, fibroblasts move into a damaged area to help repair the damage, and even the germinal cells of the skin, though ordinarily completely sessile cells, move toward a cut area to repair the rent. Finally, cell loco-motion is especially important in development of the embryo and fetus after fertilization of an ovum. For instance, embryonic cells often must migrate long dis-tances from their sites of origin to new areas during development of special structures.

Control of Ameboid Locomotion—Chemotaxis. The mostimportant initiator of ameboid locomotion is the process called chemotaxis. This results from the appear-ance of certain chemical substances in the tissues. Any chemical substance that causes chemotaxis to occur is called achemotactic substance. Most cells that exhibit ameboid locomotion move toward the source of a chemotactic substance—that is, from an area of lower concentration toward an area of higher con-centration—which is called positive chemotaxis. Some cells move away from the source, which is callednega-tive chemotaxis.

But how does chemotaxis control the direction of ameboid locomotion? Although the answer is not certain, it is known that the side of the cell most exposed to the chemotactic substance develops membrane changes that cause pseudopodial protrusion.

This occurs in only two places in the human body: on the sufaces of the respiratory airways and on the inside surfaces of the uterine tubes (fallopian tubes) of the reproductive tract. In the nasal cavity and lower respi-ratory airways, the whiplike motion of cilia causes a layer of mucus to move at a rate of about 1 cm/min toward the pharynx, in this way continually clearing these passageways of mucus and particles that have become trapped in the mucus. In the uterine tubes, the cilia cause slow movement of fluid from the ostium of the uterine tube toward the uterus cavity; this move-ment of fluid transports the ovum from the ovary to the uterus. 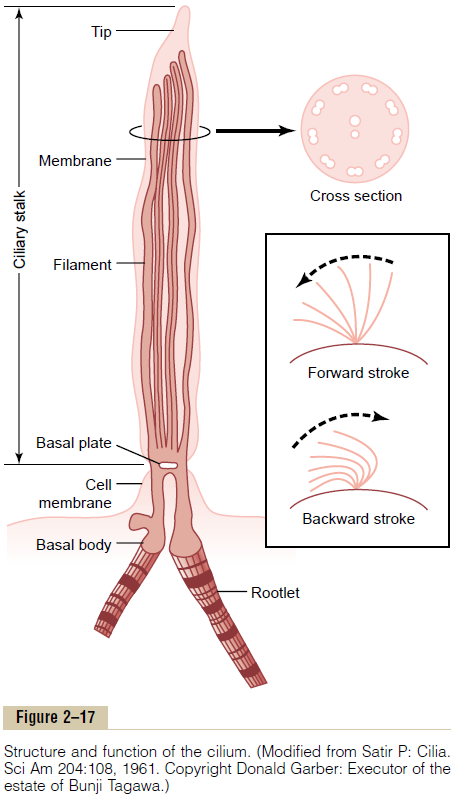 As shown in Figure 2–17, a cilium has the appearance of a sharp-pointed straight or curved hair that projects 2 to 4 micrometers from the surface of the cell. Many cilia often project from a single cell—for instance, as many as 200 cilia on the surface of each epithelial cell inside the respiratory passageways. The cilium is covered by an outcropping of the cell membrane, and it is supported by 11 microtubules—9 double tubules located around the periphery of the cilium, and 2 single tubules down the center, as demonstrated in the cross section shown in Figure 2–17. Each cilium is an out-growth of a structure that lies immediately beneath the cell membrane, called the basal body of the cilium.

The flagellum of a sperm is similar to a cilium; in fact, it has much the same type of structure and same type of contractile mechanism. The flagellum, however, is much longer and moves in quasi-sinusoidal waves instead of whiplike movements.

In the inset of Figure 2–17, movement of the cilium is shown. The cilium moves forward with a sudden, rapid whiplike stroke 10 to 20 times per second, bending sharply where it projects from the surface of the cell. Then it moves backward slowly to its initial position. The rapid forward-thrusting, whiplike movement pushes the fluid lying adjacent to the cell in the direc-tion that the cilium moves; the slow, dragging movement in the backward direction has almost no effect on fluid movement. As a result, the fluid is continually propelled in the direction of the fast-forward stroke. Because most ciliated cells have large numbers of cilia on their sur-faces and because all the cilia are oriented in the same direction, this is an effective means for moving fluids from one part of the surface to another.

Mechanism of Ciliary Movement. Although not all aspects ofciliary movement are clear, we do know the following: First, the nine double tubules and the two single tubules are all linked to one another by a complex of protein cross-linkages; this total complex of tubules and cross-linkages is called the axoneme. Second, even after removal of the membrane and destruction of other ele-ments of the cilium besides the axoneme, the cilium can still beat under appropriate conditions. Third, there are two necessary conditions for continued beating of the axoneme after removal of the other structures of the cilium: (1) the availability of ATP and (2) appropriate ionic conditions, especially appropriate concentrations of magnesium and calcium. Fourth, during forward motion of the cilium, the double tubules on the front edge of the cilium slide outward toward the tip of the cilium, while those on the back edge remain in place. Fifth, multiple protein arms composed of the protein dynein, which has ATPase enzymatic activity, projectfrom each double tubule toward an adjacent double tubule.

Given this basic information, it has been determined that the release of energy from ATP in contact with the ATPase dynein arms causes the heads of these arms to “crawl” rapidly along the surface of the adjacent double tubule. If the front tubules crawl outward while the back tubules remain stationary, this will cause bending.

The way in which cilia contraction is controlled is not understood. The cilia of some genetically abnormal cells do not have the two central single tubules, and these cilia fail to beat. Therefore, it is presumed that some signal, perhaps an electrochemical signal, is transmitted along these two central tubules to activate the dynein arms.