Extraction of Energy from Nutrients - Function of the Mitochondria

The principal substances from which cells extract energy are foodstuffs that react chemically with oxygen—carbohydrates, fats, and proteins.

Extraction of Energy from Nutrients - Function of the Mitochondria

The principal substances from which cells extract energy are foodstuffs that react chemically with oxygen—carbohydrates, fats, and proteins. In the human body, essentially all carbohydrates are con-verted into glucose by the digestive tract and liver before they reach the other cells of the body. Similarly, proteins are converted into amino acids and fats into fatty acids. Figure 2–14 shows oxygen and the food-stuffs—glucose, fatty acids, and amino acids—all enter-ing the cell. Inside the cell, the foodstuffs react chemically with oxygen, under the influence of enzymes that control the reactions and channel the energy released in the proper direction. 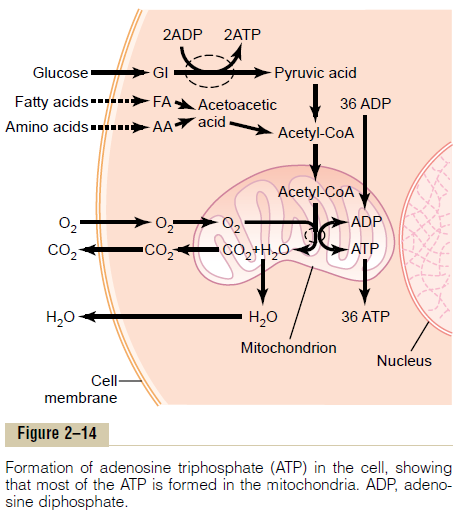 Briefly, almost all these oxidative reactions occur inside the mitochondria, and the energy that is released is used to form the high-energy compound ATP. Then, ATP, not the original foodstuffs, is usedthroughout the cell to energize almost all the subse-quent intracellular metabolic reactions. 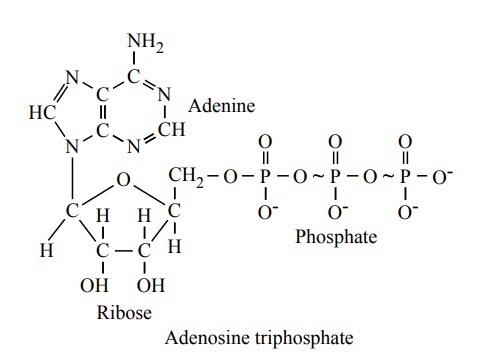 ATP is a nucleotide composed of (1) the nitrogenous base adenine, (2) the pentose sugar ribose, and (3) three phosphate radicals. The last two phosphate rad-icals are connected with the remainder of the molecule by so-called high-energy phosphate bonds, which are represented in the formula above by the symbol ~.

Under the physical and chemical conditions of the body, each of these high-energy bonds contains about12,000 calories of energy per mole of ATP, which is many times greater than the energy stored in the average chemical bond, thus giving rise to the term high-energy bond. Further, the high-energy phosphatebond is very labile, so that it can be split instantly on demand whenever energy is required to promote other intracellular reactions.

When ATP releases its energy, a phosphoric acid radical is split away, and adenosine diphosphate (ADP) is formed. This released energy is used to energize vir-tually all of the cell’s other functions, such as synthe-sis of substances and muscular contraction.

To reconstitute the cellular ATP as it is used up, energy derived from the cellular nutrients causes ADP and phosphoric acid to recombine to form new ATP, and the entire process repeats over and over again. For these reasons,ATP has been called the energy currency of the cell because it can be spent and remade contin-ually, having a turnover time of only a few minutes.

Chemical Processes in the Formation of ATP—Role of the Mitochondria. On entry into the cells, glucose is sub-jected to enzymes in thecytoplasm that convert it into pyruvic acid (a process called glycolysis). A small amount of ADP is changed into ATP by the energy released during this conversion, but this amount accounts for less than 5 per cent of the overall energy metabolism of the cell.

By far, the major portion of the ATP formed in the cell, about 95 per cent, is formed in the mitochondria. The pyruvic acid derived from carbohydrates, fatty acids from lipids, and amino acids from proteins are eventually converted into the compound acetyl-CoA in the matrix of the mitochondrion. This substance, in turn, is further dissoluted (for the purpose of extract-ing its energy) by another series of enzymes in the mitochondrion matrix, undergoing dissolution in a sequence of chemical reactions called the citric acidcycle,or Krebs cycle.

In this citric acid cycle, acetyl-CoA is split into its component parts, hydrogen atoms and carbon dioxide.

The carbon dioxide diffuses out of the mitochondria and eventually out of the cell; finally, it is excreted from the body through the lungs.

The hydrogen atoms, conversely, are highly reactive, and they combine instantly with oxygen that has also diffused into the mitochondria. This releases a tremen-dous amount of energy, which is used by the mito-chondria to convert very large amounts of ADP to ATP. The processes of these reactions are complex, requiring the participation of large numbers of protein enzymes that are integral parts of mitochondrial mem-branous shelves that protrude into the mitochondrialmatrix. The initial event is removal of an electron from the hydrogen atom, thus converting it to a hydrogen ion. The terminal event is combination of hydrogen ions with oxygen to form water plus the release of tremendous amounts of energy to large globular pro-teins, called ATP synthetase, that protrude like knobs from the membranes of the mitochondrial shelves. Finally, the enzyme ATP synthetase uses the energy from the hydrogen ions to cause the conversion of ADP to ATP. The newly formed ATP is transported out of the mitochondria into all parts of the cell cyto-plasm and nucleoplasm, where its energy is used to energize multiple cell functions.

This overall process for formation of ATP is called the chemiosmotic mechanism of ATP formation.

Uses of ATP for Cellular Function. Energy from ATP isused to promote three major categories of cellular functions: (1) transport of substances through multiple membranes in the cell, (2) synthesis of chemicalcompounds throughout the cell, and (3) mechanical work.These uses of ATP are illustrated by examplesin Figure 2–15: (1) to supply energy for the transport of sodium through the cell membrane, (2) to promote protein synthesis by the ribosomes, and (3) to supply the energy needed during muscle contraction. 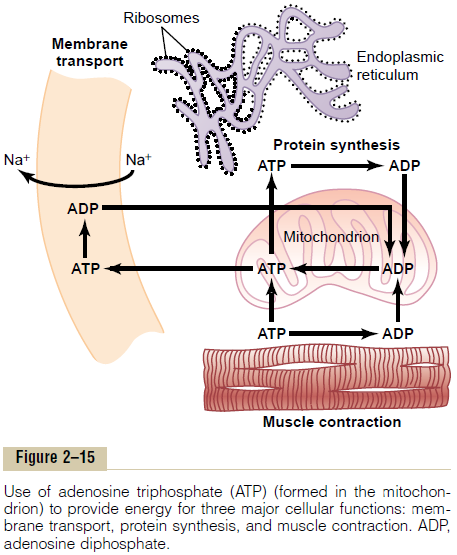 In addition to synthesizing proteins, cells synthesize phospholipids, cholesterol, purines, pyrimidines, and a host of other substances. Synthesis of almost any chemical compound requires energy. For instance, a single protein molecule might be composed of as many as several thousand amino acids attached to one another by peptide linkages; the formation of each of these linkages requires energy derived from the break-down of four high-energy bonds; thus, many thousand ATP molecules must release their energy as each protein molecule is formed. Indeed, some cells use as much as 75 per cent of all the ATP formed in the cell simply to synthesize new chemical compounds, espe-cially protein molecules; this is particularly true during the growth phase of cells.

In summary, ATP is always available to release its energy rapidly and almost explosively wherever in the cell it is needed. To replace the ATP used by the cell,much slower chemical reactions break down carbohy-drates, fats, and proteins and use the energy derived from these to form new ATP. More than 95 per cent of this ATP is formed in the mitochondria, which accounts for the mitochondria being called the “pow-erhouses” of the cell.