Membranous Structures of the Cell 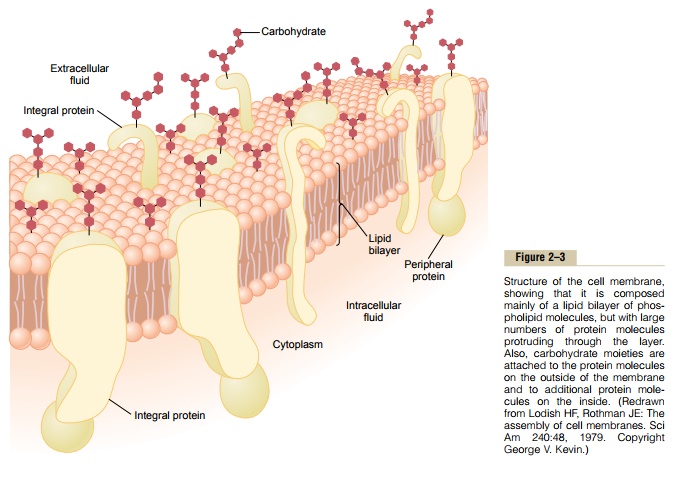 Most organelles of the cell are covered by membranes composed primarily of lipids and proteins.These mem- branes include the cell membrane, nuclear membrane, membrane of the endoplasmic reticulum, and mem- branes of the mitochondria, lysosomes, and Golgi apparatus.

Membranous Structures of the Cell

Most organelles of the cell are covered by membranes composed primarily of lipids and proteins.These mem- branes include the cell membrane, nuclear membrane, membrane of the endoplasmic reticulum,and mem- branes  of  the  mitochondria, lysosomes,  and  Golgi apparatus.

The lipids of the membranes provide a barrier that impedes the movement of water and water-soluble substances from one cell compartment to another because water is not soluble in lipids. However, protein molecules in the membrane often do penetrate all the way through the membrane, thus providing specialized pathways,  often  organized  into  actual  pores,  for passage of specific substances through the membrane.Also, many other membrane proteins are enzymes that catalyze a multitude of different chemical reactions, discussed here and in subsequent.

The cell membrane (also called the plasma mem- brane), which envelops the cell, is a thin, pliable, elastic structure only 7.5 to 10 nanometers thick. It is composed almost entirely of proteins and lipids.The approximate composition is proteins, 55 per cent; phospholipids, 25 per cent; cholesterol, 13 per cent; other lipids, 4 per cent; and carbohydrates, 3 per cent.

Figure 2–3 shows the structure of the cell membrane. Its basic structure is a lipid bilayer, which is a thin, double-layered film of lipids—each layer only one molecule thick—that is continuous over the entire cell surface. Interspersed in this lipid film are large globu-lar protein molecules. 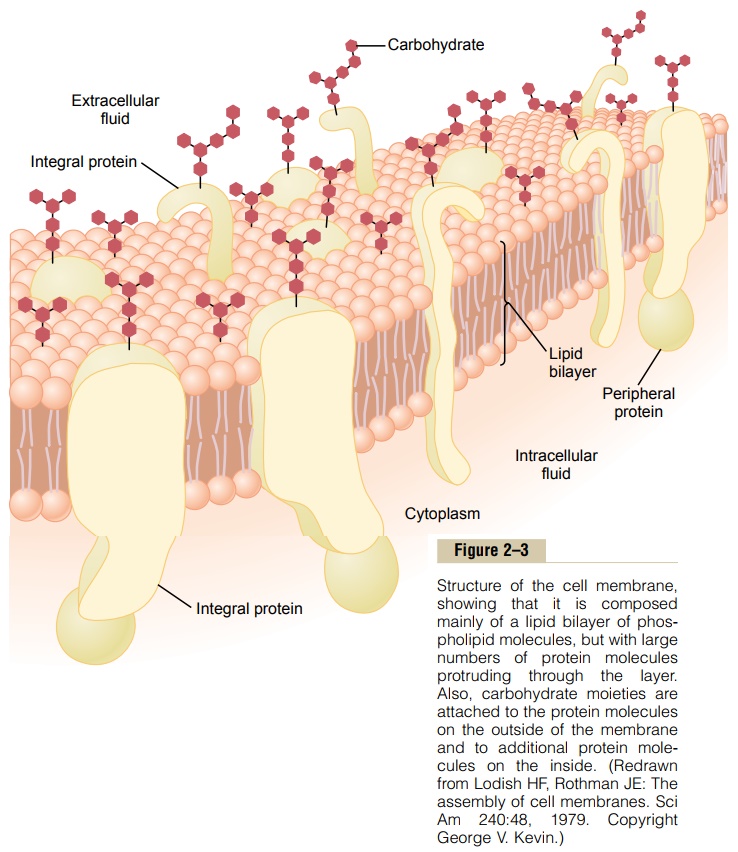 Because the hydrophobic portions of the phospho-lipid molecules are repelled by water but are mutually attracted to one another, they have a natural tendency to attach to one another in the middle of the mem-brane, as shown in Figure 2–3. The hydrophilic phos-phate portions then constitute the two surfaces of the complete cell membrane, in contact with intracellular water on the inside of the membrane andextracellular water on the outside surface.

The cholesterol molecules in the membrane are also lipid in nature because their steroid nucleus is highly fat soluble. These molecules, in a sense, are dissolved in the bilayer of the membrane. They mainly help determine the degree of permeability (or imperme-ability) of the bilayer to water-soluble constituents of body fluids. Cholesterol controls much of the fluidity of the membrane as well.

Cell Membrane Proteins. Figure 2–3 also shows globularmasses floating in the lipid bilayer. These are mem-brane proteins, most of which are glycoproteins. Two types of proteins occur: integral proteins that protrude all the way through the membrane, and peripheral pro-teins that are attached only to one surface of the mem-brane and do not penetrate all the way through.

Many of the integral proteins provide structural channels (or pores) through which water moleculesand water-soluble substances, especially ions, can diffuse between the extracellular and intracellular fluids. These protein channels also have selective prop-erties that allow preferential diffusion of some sub-stances over others.

Other integral proteins act as carrier proteins for transporting substances that otherwise could not pen-etrate the lipid bilayer. Sometimes these even trans-port substances in the direction opposite to their natural direction of diffusion, which is called “active transport.” Still others act as enzymes.

Integral membrane proteins can also serve as recep-tors for water-soluble chemicals, such as peptide hor-mones, that do not easily penetrate the cell membrane. Interaction of cell membrane receptors with specific ligands that bind to the receptor causes conforma-tional changes in the receptor protein. This, in turn, enzymatically activates the intracellular part of the protein or induces interactions between the receptor and proteins in the cytoplasm that act as second mes-sengers, thereby relaying the signal from the extracel-lular part of the receptor to the interior of the cell. In this way, integral proteins spanning the cell membrane provide a means of conveying information about the environment to the cell interior.

Peripheral protein molecules are often attached to the integral proteins. These peripheral proteins func-tion almost entirely as enzymes or as controllers of transport of substances through the cell membrane “pores.”

Membrane Carbohydrates—The Cell “Glycocalyx.” Mem-brane carbohydrates occur almost invariably in combination with proteins or lipids in the form of gly-coproteins or glycolipids. In fact, most of the integralproteins are glycoproteins, and about one tenth of the membrane lipid molecules are glycolipids. The “glyco” portions of these molecules almost invariably protrude to the outside of the cell, dangling outward from the cell surface. Many other carbohydrate compounds, called proteoglycans—which are mainly carbohydrate substances bound to small protein cores—are loosely attached to the outer surface of the cell as well. Thus, the entire outside surface of the cell often has a loose carbohydrate coat called the glycocalyx.

The carbohydrate moieties attached to the outer surface of the cell have several important functions:

(1) Many of them have a negative electrical charge, which gives most cells an overall negative surface charge that repels other negative objects. (2) The gly-cocalyx of some cells attaches to the glycocalyx of other cells, thus attaching cells to one another. (3) Many of the carbohydrates act as receptor substances for binding hormones, such as insulin; when bound, this combination activates attached internal proteins that, in turn, activate a cascade of intracellular enzymes. (4) Some carbohydrate moieties enter into immune reactions. 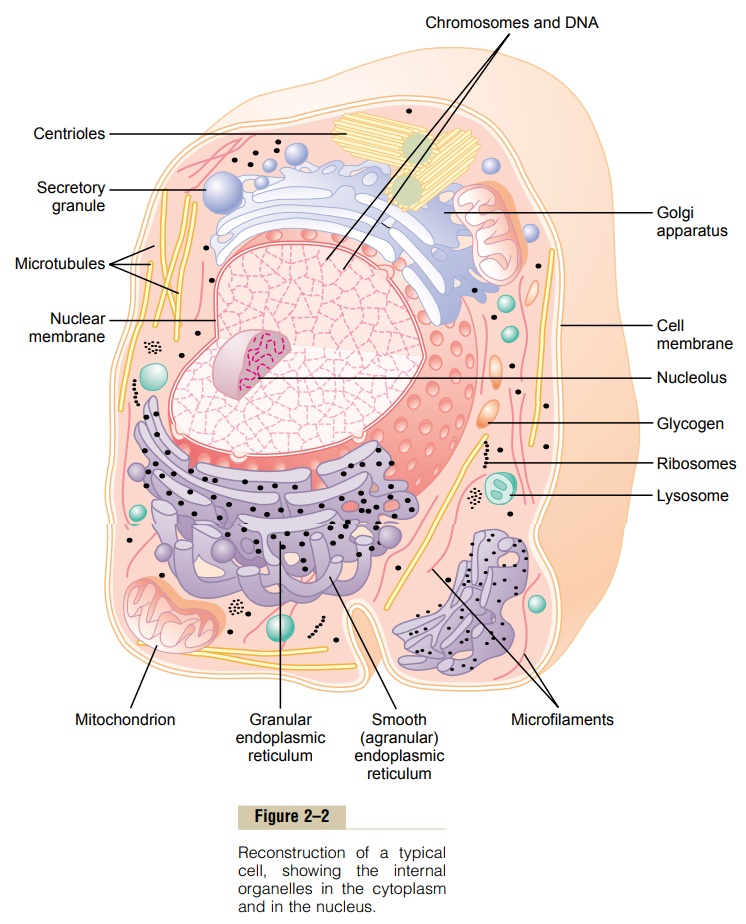