Home | | Medical Physiology | Digestion of Pinocytotic and Phagocytic Foreign Substances Inside the Cell - Function of the Lysosomes
Posted On :  26.07.2017 01:29 pm 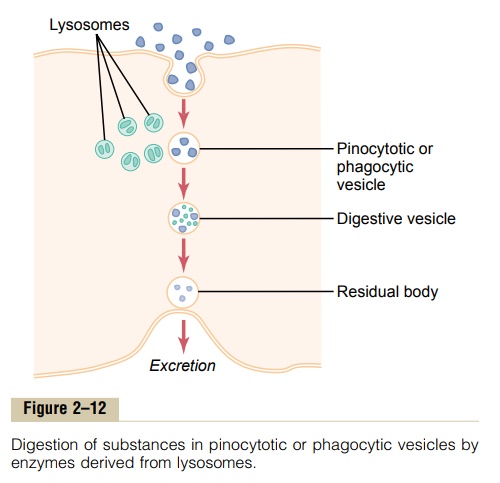 Almost immediately after a pinocytotic or phagocytic vesicle appears inside a cell, one or more lysosomes become attached to the vesicle and empty their acidhydrolases to the inside of the vesicle.

Almost immediately after a pinocytotic or phagocytic vesicle appears inside a cell, one or more lysosomes become attached to the vesicle and empty their acidhydrolases to the inside of the vesicle, as shown inFigure 2–12. Thus, a digestive vesicle is formed inside the cell cytoplasm in which the vesicular hydrolases begin hydrolyzing the proteins, carbohydrates, lipids, and other substances in the vesicle. The products of digestion are small molecules of amino acids, glucose, phosphates, and so forth that can diffuse through the membrane of the vesicle into the cytoplasm. What is left of the digestive vesicle, called theresidual body, represents indigestible substances. In most instances, this is finally excreted through the cell membrane by a process called exocytosis, which is essentially the opposite of endocytosis.

Thus, the pinocytotic and phagocytic vesicles con-taining lysosomes can be called the digestive organs of the cells. 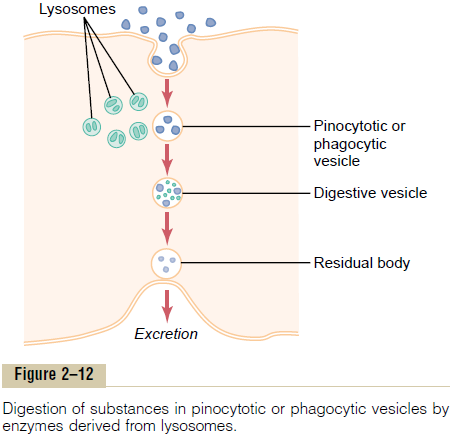 Regression of Tissues and Autolysis of Cells. Tissues of thebody often regress to a smaller size. For instance, this occurs in the uterus after pregnancy, in muscles during long periods of inactivity, and in mammary glands at the end of lactation. Lysosomes are responsible for much of this regression. The mechanism by which lack of activity in a tissue causes the lysosomes to increase their activity is unknown.

Another special role of the lysosomes is removal of damaged cells or damaged portions of cells from tissues. Damage to the cell—caused by heat, cold, trauma, chemicals, or any other factor—induces lyso-somes to rupture. The released hydrolases immedi-ately begin to digest the surrounding organic substances. If the damage is slight, only a portion of the cell is removed, followed by repair of the cell. If the damage is severe, the entire cell is digested, a process called autolysis. In this way, the cell is com-pletely removed, and a new cell of the same type ordi-narily is formed by mitotic reproduction of an adjacent cell to take the place of the old one.

The lysosomes also contain bactericidal agents that can kill phagocytized bacteria before they can cause cellular damage. These agents include (1) lysozyme, which dissolves the bacterial cell membrane; (2) lyso-ferrin, which binds iron and other substances beforethey can promote bacterial growth; and (3) acid at a pH of about 5.0, which activates the hydrolases and inactivates bacterial metabolic systems.