Symbol of an element

A symbol is an abbreviation or short representation of a chemical element. There is a unique symbol for each element.

Symbol of an element

A symbol is an abbreviation or short representation of a chemical element. There is a unique symbol for each element. It represents one atom of the element. The symbol is usually derived from the name of the element, which is either in English or Latin. These symbols are allocated by the International Union of Pure and Applied Chemistry (IUPAC).

Dalton was the first scientist to use the symbols for elements in a very specific sense. When he used a symbol for an element he also meant a definite quantity of that element, that is, one atom of that element. Berzelius suggested that the symbols of elements be made from one or two letters of the name of the element. 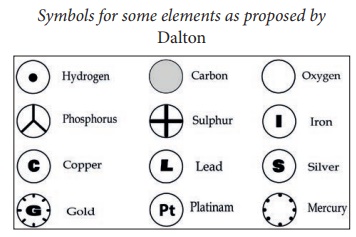 The following rules are followed while assigning symbol to an elements:

* Chemical symbols usually consist of one or two letters

* The symbols of most elements correspond to the first letter (which is capitalized) of their English name. For example, the symbol for oxygen is “O” and that for hydrogen is “H”.

When there is more than one element that begins with the same letter, their symbols take two letters. The first letter is capitalised while the second letter has a lower case. For example, the names of both hydrogen and helium begin with H. So, hydrogen is represented by the symbol H and Helium by He. Similarly, the symbol for carbon is C while the symbols for calcium, chlorine and chromium are Ca, Cl and Cr, respectively.

Write down the symbols of the following elements

In the beginning, the names of elements were derived from the name of the place where they were found for the first time. For example, the name copper was taken from Cyprus. Some names were taken from specific colours. For example, gold was taken from the English word meaning yellow. Now-a-days, IUPAC approves names of elements. Many of the symbols are the first one or two letters of the element’s name in English. The first letter of a symbol is always written as a capitalletter (uppercase) and the second letteras a small letter (lowercase).