● Two angles which have a common vertex and a common arm, whose interiors do not overlap are called adjacent angles.

● The adjacent angles that are supplementary are called linear pair of angles.

● When two lines intersect each other, two pairs of non-adjacent angle formed are called vertically opposite angles.

● A transversal is a line that intersects two or more lines at distinct points.

● when two parallel lines are cut by a transversal,

◊ each pair of corresponding angles are equal.

◊ each pair of alternate Interior angles are equal.

◊ each pair of alternate exterior angles are equal.

◊ interior angles on the same side of the transversal are supplementary.

◊ exterior angles on the same side of the transversal are supplementary.

Expected Result is shown in this picture

In the second activity “Parallel lines and Transverse” move the points A and B and observe the different angles formed by the transverse line.

Step - 2 : Move the sliders to get, Parallelogram or Rectangle or Square and see the points given and observe. 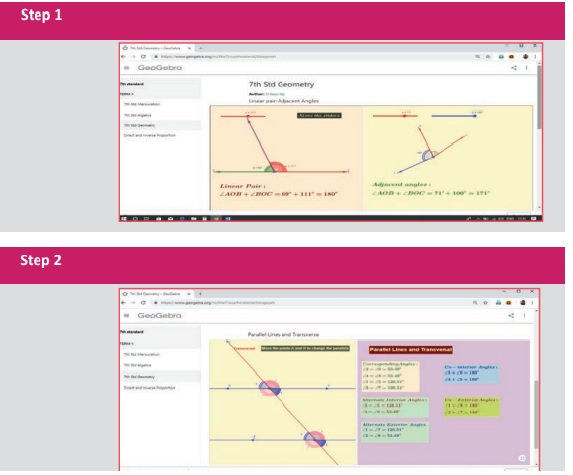 or Scan the QR Code.