● To understand about adjacent angles, linear pair and vertically opposite angles.

● To identify the different types of angles formed by a pair of lines wilth a transversal.

● To construct perpendicular bisector of a given line segment.

● To construct angle bisector of a given angle.

Let us recall the following concepts on lines and points which we have learnt in class VI.

A line extends along both directions without any end. A line AB is denoted by

. Sometimes small letters like l, m, n and so on are used to denote lines.

If two lines m and n are parallel, then we denote it as m||n. Parallel lines never intersect each other.

When two lines have a common point they are called intersecting lines and that point is called the point of intersection of the given two lines.

(i) A line is a straight path that goes on endlessly in two directions.

(ii) A line segment is a line with two end points.

(iii) A ray is a straight path that begins at a point and goes on and extends endlessly in the other direction.

(iv) The lines which intersect at right angles are perpendicular lines.

(v) The lines which intersect each other at a point are called Intersecting lines.

(vi) The lines that never intersect are called parallel lines.

2. Use a ruler or straightedge to draw each figure.

3. Look at the figure and answer the following questions. 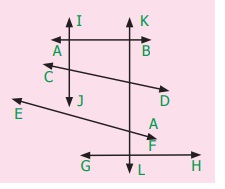 (i) Which line is parallel to AB : GH

(iii) Name the lines which are perpendicular to GH : KL

(iv) How many lines are parallel to IJ

Recall that an angle is formed when two rays diverge from a common point. The rays forming an angle are called the arms of the angle and the common point is called the vertex of the angle. You have studied different types of angles, such as acute angle, right angle, obtuse angle, straight angle and reflex angle, in class VI. We can summarize them as follows:

An angle whose measure is less than 90º is called an acute angle.

An angle whose measure is exactly 90º is called a right angle.

An angle whose measure is greater than 90º is called an obtuse angle.

An angle whose measure is exactly 180° is called a straight angle.

An angle whose measure is greater than 180° and less than 360° is called a reflex angle.

Also, we have studied about related angles such as complementary and supplementary angles in our previous class. Let us recall them.

Two angles are called Complementary angles if their sum is 90°.

Are the two angles given in the figure complementary? Yes.

The pair of angles 35° and 55° are complementary, where the angle 35° is said to be the complement of the other angle 55° and vice versa.

Two angles are called Supplementary angles if their sum is 180°.

Observe the sum of measures of the angles 70° and 110° given in the figure is 180°. When two angles are supplementary, each angle is said to be the supplement of the other.

(a) an acute angle

(b) a right angle

4. If a perpendicular line is bisecting the given line, you would have two

We are familiar with complementary and supplementary angles. Let us see some more related pairs of angles now.

Beauty of Angles in architecture and kolams