We are going to study related angles such as adjacent angles, linear pair of angles and vertically opposite angles.

We are going to study related angles such as adjacent angles, linear pair of angles and vertically opposite angles.

The teacher shows a picture of sliced orange with angles marked on it.

Read the conversation between the teacher and students.

Teacher : How many angles are marked on the picture? Can you name them?

Teacher : Which are the angles seen next to each other?

Teacher : How many vertices are there?

Mugil :  There is only one common vertex. 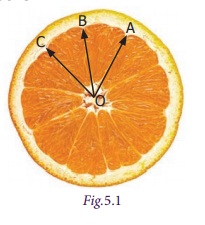 Teacher : How many arms are there? Name them.

Amudhan : There are three arms. They are

Teacher : Is there any common arm for ∠AOB and ∠BOC?

Teacher : What can you say about the arms

Kavin : They lie on the either side of the common arm

Mugil : No. Their interiors are not overlapping.

Teacher : Hence the two angles, ∠AOB and ∠BOC have one common vertex (O), one common arm (

) lie on either side of the common arm and their interiors do not overlap.

Such pair of angles ∠AOB and ∠BOC are called adjacent angles.

So, two angles which have a common vertex and a common arm, whose interiors do not overlap are called adjacent angles.

It can be observed that there are two pairs of adjacent angles such as ∠1, ∠2 and ∠2, ∠3. Then what about the pair of angles ∠1 and ∠3? 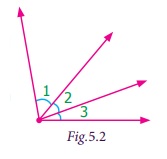 In each of the following figures, observe the pair of angles that are marked as ∠1 and ∠2. Do you think that they are adjacent pairs? Justify your answer.

Can you give three more examples of adjecent angles seen in real life?

2. Observe the six angles marked in the picture shown. Write any four pairs of adjacent angles and that are not. 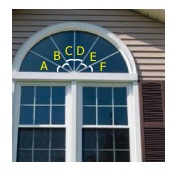 ∠C and ∠D, ∠D and ∠E

3. Identify the common arm, common vertex of the adjacent angles and shade the interior with two colours in each of the following figures.

4. Name the adjacent angles in each of the following figure. 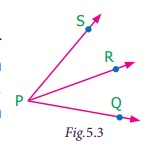 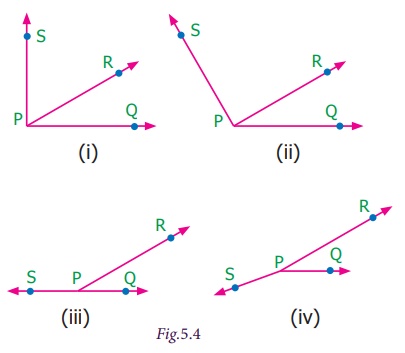 1. Observe the following pictures and find the other angle of linear pair.

Observe the figure. There are two angles namely ∠PQR = 150° and ∠QPS = 30°. Is all this pair of supplementary angles a linear pair? Discuss. 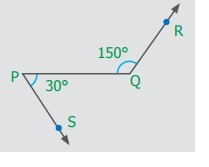 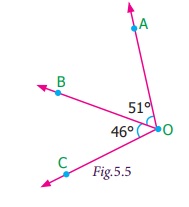 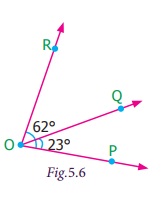 Subtracting 23° on both sides

Example 5.3 Which of the following pair of adjacent angles will make a linear pair?

(i) Since the angles are linear pair,

Subtracting 123° on both sides

Subtracting 46° on both sides

Example 5.5 Two angles are in the ratio 3:2. If they are linear pair, find them.

Let the angles be 3x and 2x

Since they are linear pair of angles, their sum is 180°.

Amudhan asked his teacher what would happen if he drew a ray in between a linear pair of angles? The teacher told him to draw it. Amudhan drew the ray as shown in Fig.5.8.

Teacher asked Amudhan, "what can you say about the angles ∠AOB and ∠BOC?". He said that they are adjacent angles. Also it is true that ∠AOB + ∠BOC = ∠AOC.

The teacher also asked about the pair of angles ∠AOC and ∠COD. He replied that they are linear pair. Therefore, their sum is 180° i.e. ∠AOC + ∠COD = 180°.

Thus, the sum of all the angles formed at a point on a straight line is 180°.

What would happen to the angles if we add 3 or 4 or 5 rays on a line as given below?

We can learn one more result on linear pairs.

AB is a straight line. OC is a ray meeting AB at O.

Also, OD is another ray meeting AB at O.

Can you justify the following statement.

Subtracting 58° on both sides 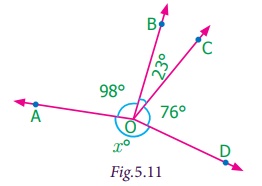 We have already studied about intersecting lines. Observe the Fig.5.12. There are two lines namely l and m which are intersecting at a point O and forming four angles at that point of intersection. They are ∠1, ∠2, ∠3 and ∠4.

When two lines intersect each other, two pairs of non-adjacent angles formed are called vertically opposite angles.

1. Four real life examples for vertically opposite angles are given below.

Give four more examples for vertically opposite angles in your surrounding.

2. In the given figure, two lines

intersect at O. Observe the pair of angles and complete the following table. One is done for you. 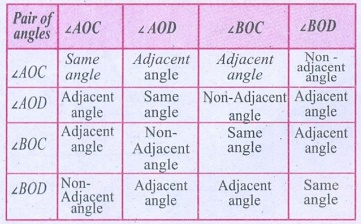 3. Name the two pairs of vertically  opposite angles. 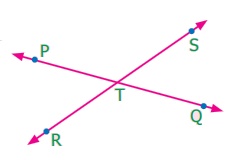 4. Find the value of x° in the figure given below. 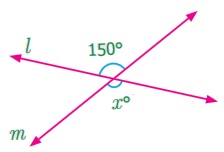