Structure of the Microcirculation and Capillary System 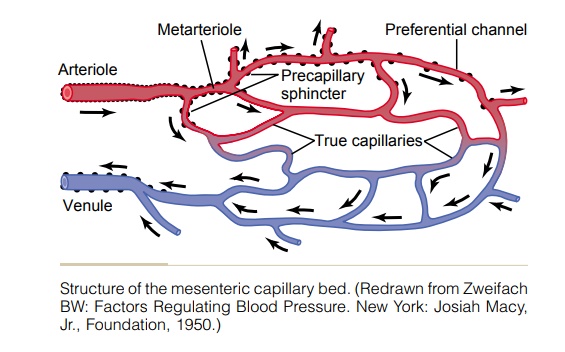 The microcirculation of each organ is organized specifically to serve that organ’s needs.

Structure of the Microcirculation and Capillary System

The microcirculation of each organ is organized specifically to serve that organ’s needs. In general, each nutrient artery entering an organ branches six to eight times before the arteries become small enough to be called arterioles, which generally have internal diameters of only 10 to 15 micrometers. Then the arterioles themselves branch two to five times, reaching diameters of 5 to 9 micrometers at their ends where they supply blood to the capillaries.

The arterioles are highly muscular, and their diameters can change manyfold. The metarterioles (the terminal arterioles) do not have a continuous muscular coat, but smooth muscle fibers encircle the vessel at intermittent points, as shown in Figure 16–1 by the black dots on the sides of the metarteriole. 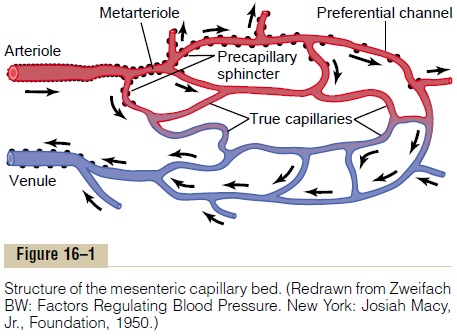 At the point where each true capillary originates from a metarteriole, a smooth muscle fiber usually encircles the capillary. This is called the precapillary sphincter. This sphincter can open and close the entrance to the capillary.

This typical arrangement of the capillary bed is not found in all parts of the body; however, some similar arrangement serves the same purposes. Most important, the metarterioles and the precapillary sphincters are in close contact with the tissues they serve. Therefore, the local conditions of the tissues—the concentrations of nutrients, end products of metabolism, hydrogen ions, and so forth—can cause direct effects on the vessels in controlling local blood flow in each small tissue area.

Structure of the Capillary Wall. Figure 16–2 shows the ultramicroscopic structure oftypical endothelial cells in the capillary wall as found in most organs of the body, especially in muscles and connective tissue. Note that the wall is composed of 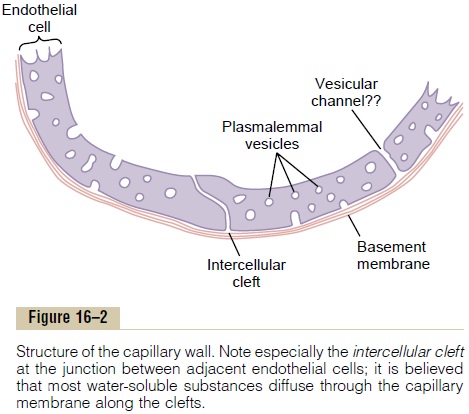 “Pores” in the Capillary Membrane. Studying Figure 16–2,one sees two very small passageways connecting the interior of the capillary with the exterior. One of these is an intercellular cleft, which is the thin-slit, curving channel that lies at the bottom of the figure between adjacent endothelial cells. Each cleft is interrupted periodically by short ridges of protein attachments that hold the endothelial cells together, but between these ridges fluid can percolate freely through the cleft. The cleft normally has a uniform spacing with a width of about 6 to 7 nanometers (60 to 70 angstroms), slightly smaller than the diameter of an albumin protein molecule.

Because the intercellular clefts are located only at the edges of the endothelial cells, they usually repre-sent no more than 1/1000 of the total surface area of the capillary wall. Nevertheless, the rate of thermal motion of water molecules as well as most water-soluble ions and small solutes is so rapid that all of these diffuse with ease between the interior and exte-rior of the capillaries through these “slit-pores,” the intercellular clefts.

Also present in the endothelial cells are many minute plasmalemmal vesicles. These form at one surface of the cell by imbibing small packets of plasma or extracellular fluid. They can then move slowly through the endothelial cell. It also has been postu-lated that some of these vesicles coalesce to form vesicular channels all the way through the endothelialcell, which is demonstrated to the right in Figure 16–2. However, careful measurements in laboratory animals probably have proved that these vesicular forms of transport are quantitatively of little importance.

1.  In the brain, the junctions between the capillary endothelial cells are mainly “tight” junctions that allow only extremely small molecules such as water, oxygen, and carbon dioxide to pass into or out of the brain tissues.

2.  In the liver, the opposite is true. The clefts between the capillary endothelial cells are wide open, so that almost all dissolved substances of the plasma, including the plasma proteins, can pass from the blood into the liver tissues.

3.  The pores of the gastrointestinal capillarymembranes are midway between those of themuscles and those of the liver.