E. H. Starling pointed out over a century ago that under normal conditions, a state of near-equilibrium exists at the capillary membrane.

E. H. Starling pointed out over a century ago that under normal conditions, a state of near-equilibrium exists at the capillary membrane. That is, the amount of fluid filtering outward from the arterial ends of cap-illaries equals almost exactly the fluid returned to the circulation by absorption. The slight disequilibrium that does occur accounts for the small amount of fluid that is eventually returned by way of the lymphatics.

The following chart shows the principles of the Star-ling equilibrium. For this chart, the pressures in the arte-rial and venous capillaries are averaged to calculate mean functional capillary pressure for the entire length of the capillary. This calculates to be 17.3 mm Hg. 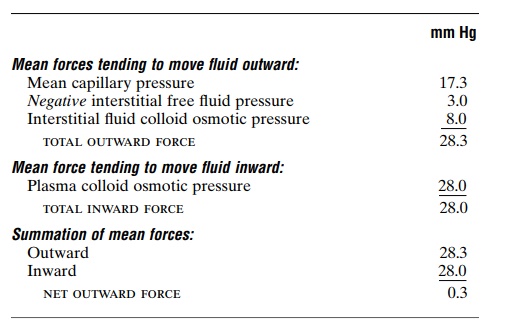 Thus, for the total capillary circulation, we find a near-equilibrium between the total outward forces, 28.3 mm Hg, and the total inward force, 28.0 mm Hg. This slight imbalance of forces, 0.3 mm Hg, causes slightly more filtration of fluid into the interstitial spaces than reabsorption. This slight excess of filtration is called net filtration, and it is the fluid that must be returned to the circulation through the lymphatics. The normal rate of net filtration in the entire body is only about 2 milliliters per minute.

The filtration coefficient can also be expressed for separate parts of the body in terms of rate of filtration per minute per millimeter of mercury per 100 grams of tissue. On this basis, the filtration coefficient of the average tissue is about 0.01 ml/min/mm Hg/100 g of tissue. But, because of extreme differences in perme-abilities of the capillary systems in different tissues, this coefficient varies more than 100-fold among the different tissues. It is very small in both brain and muscle, moderately large in subcutaneous tissue, large in the intestine, and extreme in the liver and glomeru-lus of the kidney where the pores are either numerous or wide open. By the same token, the permeation of proteins through the capillary membranes varies greatly as well. The concentration of protein in the interstitial fluid of muscles is about 1.5 g/dl; in subcu-taneous tissue, 2 g/dl; in intestine, 4 g/dl; and in liver, 6 g/dl.

Effect of Abnormal Imbalance of Forces at the Capillary Membrane

If the mean capillary pressure rises above 17 mm Hg, the net force tending to cause filtration of fluid into the tissue spaces rises. Thus, a 20 mm Hg rise in mean cap-illary pressure causes an increase in net filtration pres-sure from 0.3 mm Hg to 20.3 mm Hg, which results in 68 times as much net filtration of fluid into the inter-stitial spaces as normally occurs. To prevent accumu-lation of excess fluid in these spaces would require 68 times the normal flow of fluid into the lymphatic system, an amount that is 2 to 5 times too much for the lymphatics to carry away. As a result, fluid will begin to accumulate in the interstitial spaces, and edema will result.

Conversely, if the capillary pressure falls very low, net reabsorption of fluid into the capillaries will occur instead of net filtration, and the blood volume will increase at the expense of the interstitial fluid volume.