Micropipette Method for Measuring Capillary Pressure. Tomeasure pressure in a capillary by cannulation, a microscopic glass pipette is thrust directly into the cap-illary, and the pressure is measured by an appropriate micromanometer system. Using this method, capillary pressures have been measured in capillaries of exposed tissues of animals and in large capillary loops of the eponychium at the base of the fingernail in humans. These measurements have given pressures of 30 to 40 mm Hg in the arterial ends of the capillaries, 10 to 15 mm Hg in the venous ends, and about 25 mm Hg in the middle.

Isogravimetric Method for Indirectly Measuring “Functional” Capillary Pressure. Figure 16–6 demonstrates aniso-gravimetric method for indirectly estimating capillarypressure. This figure shows a section of gut held up by one arm of a gravimetric balance. Blood is perfused through the blood vessels of the gut wall. When the arterial pressure is decreased, the resulting decrease in capillary pressure allows the osmotic pressure of the plasma proteins to cause absorption of fluid out of the gut wall and makes the weight of the gut decrease. This immediately causes displacement of the balance arm. To prevent this weight decrease, the venous pressure is increased an amount sufficient to overcome the effect of decreasing the arterial pressure. In other words, the capillary pressure is kept constant while simultaneously (1) decreasing the arterial pressure and (2) increasing the venous pressure. 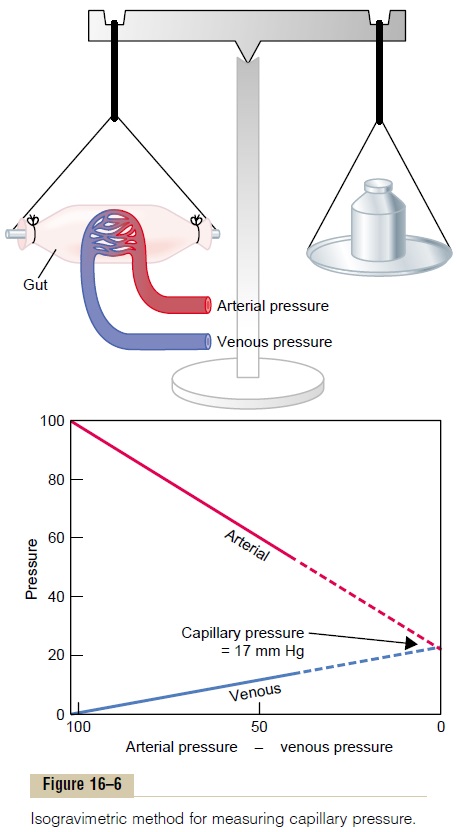 In the graph in the lower part of the figure, the changes in arterial and venous pressures that exactly nullify all weight changes are shown. The arterial and venous lines meet each other at a value of 17 mm Hg. Therefore, the capillary pressure must have remained at this same level of 17 mm Hg throughout these maneuvers; otherwise, either filtration or absorption of fluid through the capillary walls would have occurred.

Thus, in a roundabout way, the “functional” capillary pressure is measured to be about 17 mm Hg.

It is easy to explain why the cannulation methods give higher pressure values. The most important reason is that these measurements usually are made in capillaries whose arterial ends are open and when blood is actively flowing into the capillary. However, it should be recalled from the earlier discussion of cap-illary vasomotion that the metarterioles and precapil-lary sphincters normally are closed during a large part of the vasomotion cycle. When closed, the pressure in the capillaries beyond the closures should be almost equal to the pressure at the venous ends of the capil-laries, about 10 mm Hg. Therefore, when averaged over a period of time, one would expect the functional mean capillary pressure to be much nearer to the pres-sure in the venous ends of the capillaries than to the pressure in the arterial ends.