The lymphatic system represents an accessory route through which fluid can flow from the interstitial spaces into the blood.

The lymphatic system represents an accessory route through which fluid can flow from the interstitial spaces into the blood. Most important, the lymphatics can carry proteins and large particulate matter away from the tissue spaces, neither of which can be removed by absorption directly into the blood capil-laries. This return of proteins to the blood from the interstitial spaces is an essential function without which we would die within about 24 hours.

Almost all tissues of the body have special lymph chan-nels that drain excess fluid directly from the interstitial spaces. The exceptions include the superficial portions of the skin, the central nervous system, the endomysium of muscles, and the bones. But, even these tissues have minute interstitial channels called prelymphatics through which interstitial fluid can flow; this fluid even-tually empties either into lymphatic vessels or, in the case of the brain, into the cerebrospinal fluid and then directly back into the blood.

Essentially all the lymph vessels from the lower part of the body eventually empty into the thoracic duct, which in turn empties into the blood venous system at the juncture of the left internal jugular vein and left sub-clavian vein, as shown in Figure 16–8. 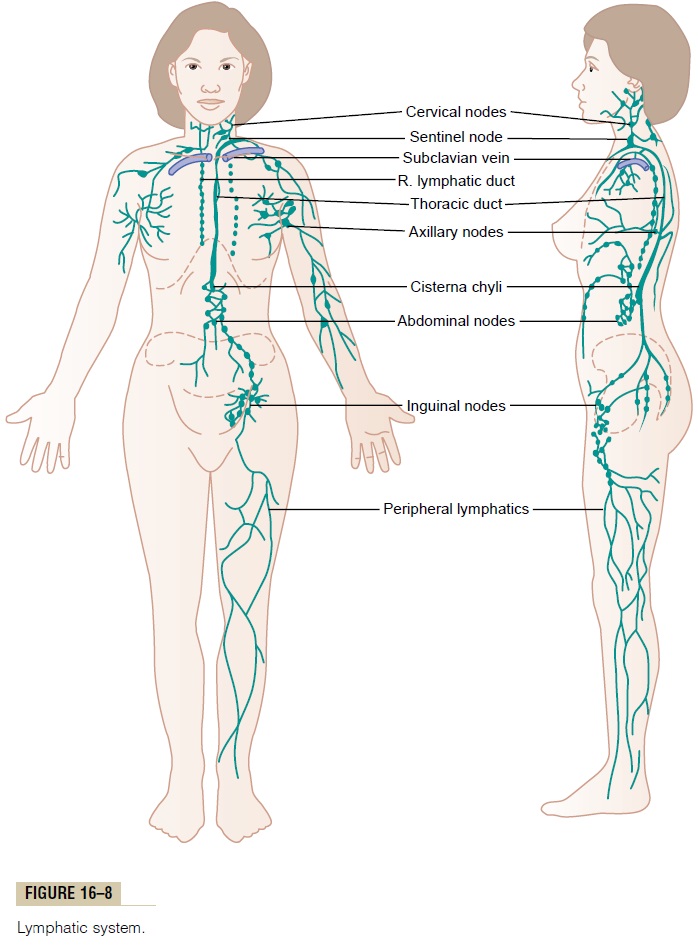 Lymph from the left side of the head, the left arm, and parts of the chest region also enters the thoracic duct before it empties into the veins.

Lymph from the right side of the neck and head, the right arm, and parts of the right thorax enters the rightlymph duct (much smaller than the thoracic duct), whichempties into the blood venous system at the juncture of the right subclavian vein and internal jugular vein.

Terminal Lymphatic Capillaries and Their Permeability. Mostof the fluid filtering from the arterial ends of blood capillaries flows among the cells andfinally is reab-sorbed back into the venous ends of the blood capil-laries; but on the average, about 1/10 of thefluidinstead enters the lymphatic capillaries and returns to the blood through the lymphatic system rather than through the venous capillaries. The total quantity of all this lymph is normally only 2 to 3 liters each day. 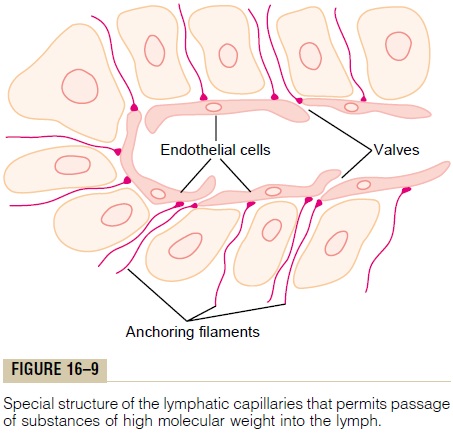 The lymphatic system is also one of the major routes for absorption of nutrients from the gastrointestinal tract, especially for absorption of virtually all fats in food. Indeed, after a fatty meal, thoracic duct lymph sometimes contains as much as 1 to 2 per cent fat.

Finally, even large particles, such as bacteria, can push their way between the endothelial cells of the lymphatic capillaries and in this way enter the lymph.

As the lymph passes through the lymph nodes, these particles are almost entirely removed and destroyed.

About 100 milliliters per hour of lymph flows through the thoracic duct of a resting human, and approxi-mately another 20 milliliters flows into the circulation each hour through other channels, making a total esti-mated lymph flow of about 120 ml/hr or 2 to 3 liters per day. 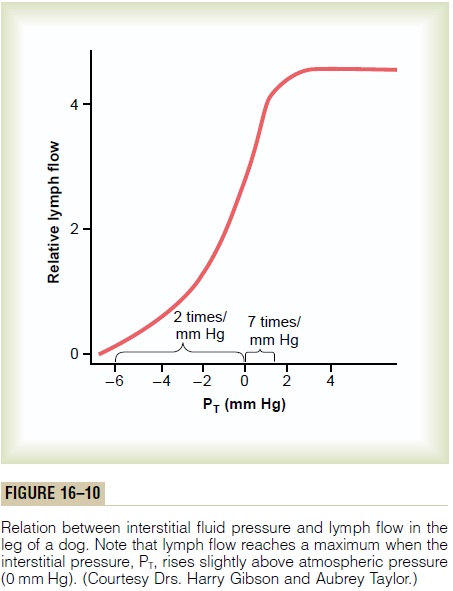 Note that normal lymph flow is very little at intersti-tial fluid pressures more negative than the normal value of -6 mm Hg. Then, as the pressure rises to 0 mm Hg (atmospheric pressure), flow increases more than 20-fold. Therefore, any factor that increases interstitial fluid pressure also increases lymph flow if the lymph vessels are functioning normally. Such factors include the following:

However, note in Figure 16–10 that when the inter-stitial fluid pressure becomes 1 or 2 millimeters greater than atmospheric pressure (greater than 0 mm Hg), lymph flow fails to rise any further at still higher pres-sures. This results from the fact that the increasing tissue pressure not only increases entry of fluid into the lymphatic capillaries but also compresses the outside surfaces of the larger lymphatics, thus imped-ing lymph flow. At the higher pressures, these two factors balance each other almost exactly, so that lymph flow reaches what is called the “maximum lymph flow rate.” This is illustrated by the upper level plateau in Figure 16–10. 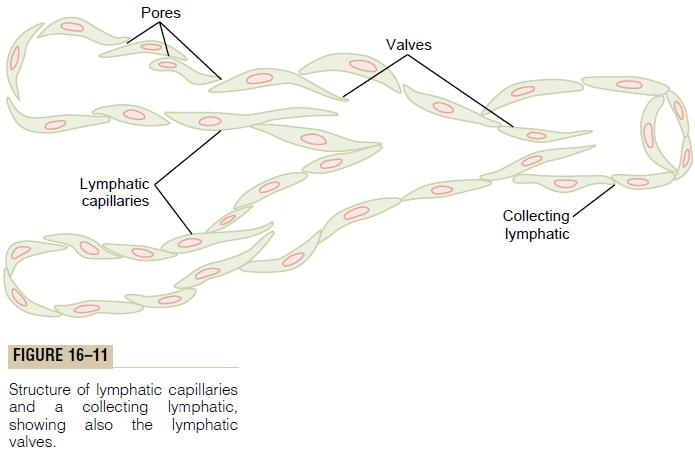 Motion pictures of exposed lymph vessels, both in animals and in human beings, show that when a collecting lymphatic or larger lymph vessel becomes stretched with fluid, the smooth muscle in the wall of the vessel automatically contracts. Furthermore, each segment of the lymph vessel between successive valves functions as a separate automatic pump. That is, even slight filling of a segment causes it to contract, and the fluid is pumped through the next valve into the next lymphatic segment. This fills the subsequent segment, and a few seconds later it, too, contracts, the process continuing all along the lymph vessel until the fluid is finally emptied into the blood circulation. In a very large lymph vessel such as the thoracic duct, this lym-phatic pump can generate pressures as great as 50 to 100 mm Hg.

Lymphatic Capillary Pump. The terminal lymphatic capillary is also capable of pumping lymph, in addition to the lymph pumping by the larger lymph vessels. The walls of the lymphatic capillaries are tightly adherent to the sur-rounding tissue cells by means of their anchoring filaments. Therefore, each time excess fluid enters the tissue and causes the tissue to swell, the anchoring filaments pull on the wall of the lymphatic capillary, and fluid flows into the terminal lymphatic capillary through the junctions between the endothelial cells. Then, when the tissue is compressed, the pressure inside the capillary increases and causes the overlap-ping edges of the endothelial cells to close like valves. Therefore, the pressure pushes the lymph forward into the collecting lymphatic instead of backward through the cell junctions.

The lymphatic capillary endothelial cells also contain a few contractile actomyosin filaments. In some animal tissues (e.g., the bat’s wing) these fila-ments have been observed to cause rhythmical con-traction of the lymphatic capillaries in the same way that many of the small blood and larger lymphatic vessels also contract rhythmically. Therefore, it is probable that at least part of lymph pumping results from lymph capillary endothelial cell contraction in addition to contraction of the larger muscular lymphatics.

Third, the increasing interstitial fluid pressure greatly increases the rate of lymph flow, as explained previously. This in turn carries away the excess inter-stitial fluid volume and excess protein that has accu-mulated in the spaces.

Thus, once the interstitial fluid protein concentra-tion reaches a certain level and causes a comparable increase in interstitial fluid volume and interstitial fluid pressure, the return of protein and fluid by way of the lymphatic system becomes great enough to balance exactly the rate of leakage of these into the interstitium from the blood capillaries. Therefore, the quantitative values of all these factors reach a steady state; they will remain balanced at these steady state levels until something changes the rate of leakage of proteins and fluid from the blood capillaries.

Traditionally, it has been assumed that the different tissues of the body are held together entirely by connective tissue fibers. However, at many places in the body, connective tissue fibers are very weak or even absent. This occurs particularly at points where tissues slide over one another, such as the skin sliding over the back of the hand or over the face. Yet even at these places, the tissues are held together by the negative interstitial fluid pressure, which is actually a partial vacuum. When the tissues lose their negative pressure, fluid accumulates in the spaces and the condition known as edema occurs.