High-energy zones in both marine and fresh waters – waveswept rocky shores in the ocean and rapids in rivers and streams – appear unsuitable for fishes because of the difficulties of remaining in place, let alone feeding and breeding under such conditions.

High-energy zones in both marine and fresh waters – waveswept rocky shores in the ocean and rapids in rivers and streams – appear unsuitable for fishes because of the difficulties of remaining in place, let alone feeding and breeding under such conditions. Invertebrates successfully occupy such locales but, except for the groups that hide behind or under rocks, tend to be rather sessile or essentially glued in place (e.g., chitons, limpets, barnacles, and sea anemones in the ocean; caddis fly larvae, black fly larvae, and water penny beetle larvae in streams). With the exception of parasitic male anglerfishes, fishes have not evolved immobile forms and yet some species are exposed to the force of the waves and currents in the same habitats as these stay-athome invertebrates.

are fused to form a suction disk (e.g., in clingfishes and gobies). Sicyases sanguineus, a large (30 cm) Chilean gobiesocid, lives in and above the intertidal zone in locales exposed directly to waves (Paine & Palmer 1978; Cancino & Castilla 1988).

High-energy freshwater habitats have produced the most striking convergences, exemplified by fishes that live in torrent zones and share a body form clearly appropriate to maintaining position in strong, unidirectional currents (Fig. 18.12). The suite of anatomical traits on which these fishes have converged include:

●Subterminal or inferior mouths in just about all species.

●Modifications to respiratory behavior (rapid inhalations followed by a quiescent period of several minutes; Berra 2001) or respiratory structures, such as the incurrent opening at the top of the gill cover in gyrinocheilids, an analogous arrangement

in astroblepid climbing catfishes, and a special fold of skin on which gill membranes rest in loach catfishes.

The common habitat indicated for many of these fishes is “mountain streams”. Some are algae scrapers (gyrinocheilds, loricariid catfishes, parodontids, loach gobies), others are well known for ascending waterfalls (kneriids, astroblepid climbing catfishes,Lentipes gobies). Many have scientific or common names that reflect specialized morphologies or suggest habitat preferences. The list includes species from perhaps 16 families and at least five different orders of teleosts (Table 18.2); other taxa in North American streams that use similar habitats and show some of the modifications include catostomid hognose suckers (Hypentelium), scorpaeniform sculpins (Cottus), and several percid darters (Etheostoma, Percina).

The relationship between form and function in many of these is fairly obvious. The depressed-flattened shape of the

body as well as the large, horizontally oriented paired fins would help push the fish down against the substrate. An adhesive or suction device similarly prevents being dislodged. Subterminal mouths allow for algae scraping or benthic feeding, whereas opening a terminal mouth creates drag. Many have reduced or lost the gas bladder, a broadly convergent trend among benthic fishes in general but an obvious necessity in swift flowing water.

Undoubtedly, some anatomical characteristics reflect phylogeny as much as adaptation to habitat, although phylogeny can preadapt organisms to particular habitats as well as constrain them from occupying others (see below, Preadaptation, evolution, and convergence). Preadaptation may help explain the abundance of catfish families in Table 18.2; catfishes as a group are freshwater benthic dwellers and somewhat depressed in body shape.

A sampling of freshwater fishes that inhabit torrent and rapid zones of streams and rivers. Most if not all have converged on body shapes and proportions, fin arrangements and shapes, and other traits that reflect the need to hold position on the bottom in swift flowing water. 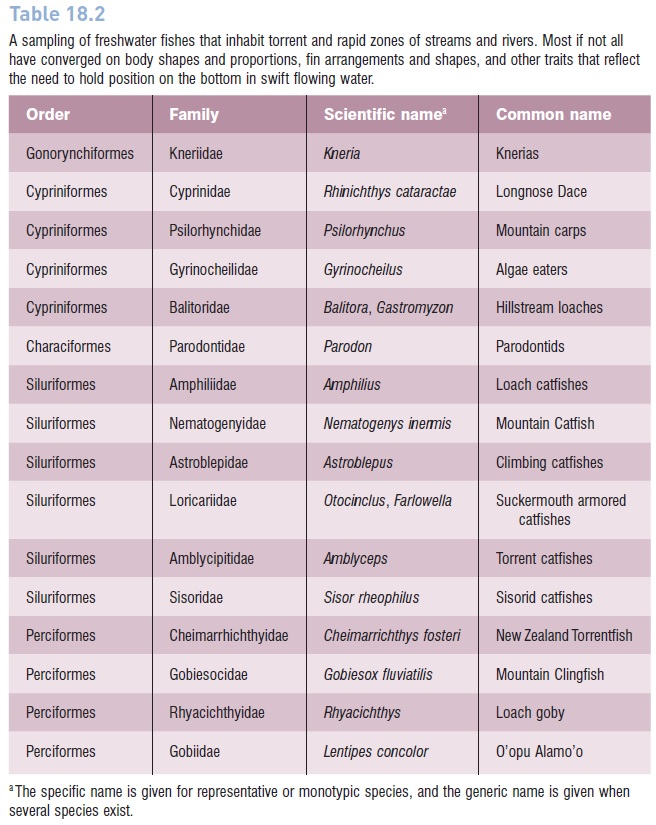 Existing adaptations probably facilitated the invasion of high-energy, freshwater habitats by marine gobiesocid clingfishes, given their flattened, teardrop-shaped bodies, benthic habits, absent swim bladder, and pelvic fins fused into a suction disk. Most of the seven clingfishes that inhabit fresh water (of a total of 140 species in the family) live in high-velocity stream zones at moderate to high elevations of Central and northern South America, regions where few of the other fishes listed in Table 18.2 occur. These clingfishes likely encountered an available, relatively unoccupied adaptive zone for which they already possessed appropriate traits (e.g., Guzman et al. 2001). Similar circumstances may help explain the successful invasion of insular fresh waters by the other perciforms in Table 18.2, such as the cheimarrhichthyidae Torrentfish (New Zealand), rhyacichthyid loach gobies (New Guinea, New Caledonia), and the gobiid O’opu Alamo’o (Hawaii).