Typical cave-adapted fishes are characterized by a lack of pigmentation, reduced squamation, a reduction or loss of light receptors (involving eyes and the pineal gland) .

Typical cave-adapted fishes are characterized by a lack of pigmentation, reduced squamation, a reduction or loss of light receptors (involving eyes and the pineal gland) (Fig. 18.13), greatly expanded lateral line and external chemo-sensory receptors, and relative decreases versus increases in brain areas associated with vision versus hearing and chemoreception, respectively. Behaviors typically mediated by vision are lost, such as schooling, the dorsal light reaction, and circadian rhythms. 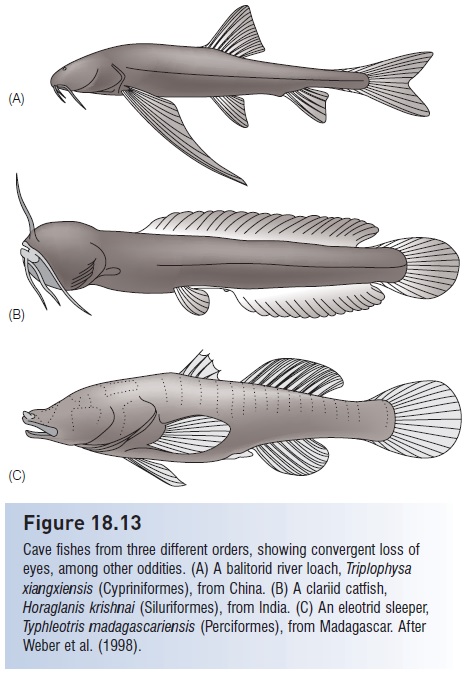 Cave fishes from three different orders, showing convergent loss of eyes, among other oddities. (A) A balitorid river loach, Triplophysa

Taste buds in surface-dwelling Astyanax fasciatus, a characin, are generally restricted to the mouth region, whereas in cave-adapted populations of the same species they cover the lower jaw and ventral areas of the head. Chemosensory capabilities are better in cave forms; caveadapted A. fasciatus are about four times more effective in finding meat on the bottom of a darkened aquarium than are the surface forms.

Adaptations to unpredictable or irregularly occurring food supplies also exist. When fed ad libitum (as much as they can consume), cave Astyanax build up larger fat reserves than surface forms, again by a factor of four (37% of body mass vs. 9%). Parallel comparisons can be made within the family of cavefishes (Amblyopsidae). The cave genera (Amblyopsis, Typhlichthys,Speoplatyrhinus) swim more efficiently, have lower metabolic rates, and find prey quicker and at greater distances in the dark than surface forms (Chologaster). The cave forms are also better at avoiding obstacles and at memorizing the locations of objects than are the surface fish. Cave catfishes (blindcats) in the North American family Ictaluridae show parallel changes with respect to eye loss, absence of pigmentation, pineal reduction, enlarged lateral line pores and canals, and brain modifications. Many analogous adaptations have also been observed in other cave-adapted taxa, including beetles, amphipods, crickets, crayfishes, shrimps, and salamanders (Poulson 1963; Poulson & White 1969; Culver 1982; Langecker & Longley 1993; Parzefall 1993).

Adjustments to cave existence also occur in the reproductive biology and life history traits of cave-dwelling fishes. Not surprisingly, visual displays are generally lacking during courtship of cave species, even in taxa such as livebearers and characins where they occur commonly in surface forms (Parzefall 1993). With respect to life history traits, cave-adapted amblyopsids produce fewer but larger eggs with greater yolk supplies, have larvae that spend more time before hatching, and have a later age at maturation and longer life spans (Bechler 1983). Reproductive rates of cave populations are surprisingly low. Only about 10% of the mature fish in a population of cavefishes may breed in any one year, each female producing 40–60 large eggs. These eggs are incubated in the mother’s gill cavity for 4–5 months, long after the young are free-swimming. This may be the longest period of parental care for an externally fertilized fish species. Many of these characteristics are what

one would expect in a habitat where adult mortality and interspecific competition are low, environmental conditions stable, and food scarce.

The degree of anatomical and behavioral change in a cave population is often correlated with the length of time available since the cave was colonized. Eye loss, characteristic of cave-adapted forms, shows some responsiveness to light availability. When youngAstyanax fasciatus from caves of different presumed ages are raised in the presence of light, individuals from old cave populations do not develop eyes, surface populations develop eyes, and populations thought to have invaded caves more recently vary in eye size (Parzefall 1993).

Food sources in caves are rather limited. Since no photosynthesis can occur in the sunless cave environment, food can only arrive if brought in by other animals or carried in by percolation through the rock or by water currents, such as during occasional floods. Common food types differ among families, but bat and cricket guano, bacteria, algae, small invertebrates (isopods, amphipods, copepods), and conspecifics are the common food types of most groups (Parzefall 1993). In Mexican caves containing the livebearerPoecilia mexicana, bat guano is supplemented by bacteria associated with sulfur springs in the cave, an interesting analog to deepsea vent communities (see above, The deep sea). Cave fishes respond to chemical or mechanical cues given off by the food; a clay ball dropped into the water containing cave fishes will induce active swimming and searching by fish within 1 m of the ball.

Cave fishes usually live at low densities, particularly those in isolated deep caves; most populations involve hundreds or at most thousands of individuals. Population density is strongly correlated with food availability, which again correlates with degree of isolation. Typical population densities of such fishes as the amblyopsid cavefishes are low, ranging from 0.005 to 0.15 fish/m2. The Blind Cavefish, Astyanax fasciatus, can reach densities of 15/m2 and Poecilia mexicana can reach densities of 200/m2 where sulfur springs occur, and near-surface caves that contain bats as an energy source host even higher densities of cavedwelling fishes.

Not surprisingly, small populations living in isolated habitats with few competitors or predators and evolving life histories that include slow growth and reproduction, make cave fishes exceedingly vulnerable to environmental disturbance, a convergent trend that cave fishes share with desert spring forms for many of the same reasons. Pollutants, water withdrawal, and competition, predation, and disease brought in by introduced species are major threats. As an ecological grouping, caves must be the habitat type with the proportionately highest rate of imperilment among fishes (and other organisms). The IUCN (2004) listed 52 cave fish species as at high risk, and experts consider at least another eight species to be in need of protection (Proudlove 1997b). The Congo Blind Barb,Caecobarbus geertsii, is threatened by the aquarium trade and is consequently listed in Appendix II of the Convention on International Trade in Endangered Species (CITES). In the USA, the Alabama 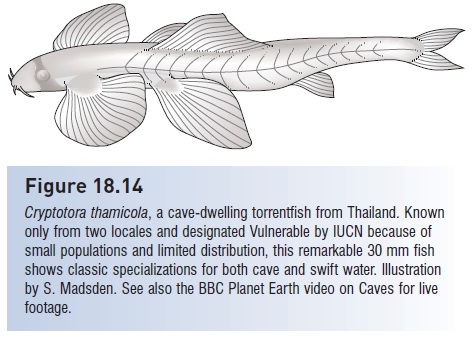 Cryptotora thamicola, a cave-dwelling torrentfish from Thailand. Known only from two locales and designated Vulnerable by IUCN because of small populations and limited distribution, this remarkable 30 mm fish shows classic specializations for both cave and swift water. Illustration by S. Madsden. See also the BBC Planet Earth video on Caves for live footage.

Cavefish, Speoplatyrhinus poulsoni, is federally protected as Endangered and the Ozark Cavefish, Amblyopsis rosae, is Threatened. Two other cavefishes that occur in the USA – the Northern Cavefish, Amblyopsis spelaea, of Kentucky and Indiana and the Southern Cavefish, Typhlichthys subterraneus, found in five southeastern states, Indiana, and Missouri – are both designated as Vulnerable by the IUCN (2004) (see Romero 1998; Romero & Bennis 1998). At the pinnacle of this discussion of evolution in special habitats is a specialized freshwater fish that truly exemplifies the Principle of Convergence. Cryptotora thamicola is a balitorid from Thailand, a member of the hillstream loach family along with several torrent-dwelling fishes. Its morphology conforms with other torrent dwellers: greatly enlarged pectoral and pelvic fins with adhesive pads, and a short, blunt, sloping forehead. It occurs in fast-flowing, cascading water where it has been observed to climb waterfalls (Kottelat 1988; Trajano et al. 2002; Proudlove 2006).Except the waterfalls are in caves, and Cryptotora is a classic cave dweller: naked, eyeless, and colorless (Fig. 18.14). Strong selection pressures produce predictable adaptations, and adaptation to one selective regime does not preclude simultaneous adaptation to other, strong selection factors.