Adaptations to the open sea

Many common threads run through the biology of pelagic fishes, suggesting convergent adaptation to pronounced and predictable selection pressures.

Adaptations to the open sea

Many common threads run through the biology of pelagic fishes, suggesting convergent adaptation to pronounced and predictable selection pressures. In general, pelagic fishes are countershaded and silvery, round or slightly compressed, streamlined with forked or lunate tails, schooling, have efficient respiration and food conversion capabilities and a high percentage of red muscle and lipids, are migratory, and account for all fish examples of endothermy. Differences in most of these characters correspond to how pelagic a species is; extreme examples are found amongst the open water, migratory tunas, which have the fastest digestion rates, the highest metabolic rates, and the most extreme specializations for sustained levels of rapid locomotion of any fishes (Magnuson 1978) and are among the most advanced of the teleost fishes.

Several superlatives apply to pelagic fishes and reflect adaptations to life in open water and an emphasis on continual swimming, often associated with long-distance migrations. Large sharks, salmons, tunas, and billfishes move thousands of kilometers annually (see  Annual and supra-annual patterns: migrations), but even smaller coastal pelagics can make annual migrations of 150 km (sprats) and even 2000 km (herring) (Cushing 1975). To sustain continual swimming, pelagics have the highest proportion of red muscle among ecological groups of fishes. Within the mackerels and tunas, the amount of red muscle increases in the more advanced groups, which are also increasingly pelagic and inhabit colder water during their seasonal migrations. In more primitive mackerels, the red muscle is limited to a peripheral, lateral band of the body, whereas in advanced tunas the red muscle is more extensive, occurs deeper in the body musculature, and is kept warm by the countercurrent heat exchangers that are also more developed in advanced scombrids (Sharp & Pirages 1978;  Heterothermic fishes). Countercurrent exchangers have evolved convergently in tunas and mackerel sharks – both pelagic fishes that range into cold tem perate and deep waters. This convergence suggests that endothermy and heat conservation arose independently in these groups and allowed otherwise tropical fishes to expand their ranges into colder regions (Block et al. 1993).

Body shapes and composition in pelagics reflect the demands of continual swimming. Unlike benthic fishes with depressed bodies and littoral zone fishes with deep, circular, compressed bodies, pelagic fishes tend to have fusiform shapes that minimize drag. This is accomplished with a rounder cross-section and by placing the maximum circumference of the body one-third of the way back from the head, an ideal streamlined shape also evolved convergently by pelagic sharks, whales, dolphins, and extinct ichthyosaurs (see  Locomotion: movement and shape). Streamlining is enhanced by having relatively small fins or having depressions or grooves on the body surface into which the fins can fit during swimming (e.g., tunas, billfishes). In high-speed fishes such as sauries, mackerels, and tunas, a series of small finlets occur both dorsally and ventrally anterior to the tail. These finlets may prevent vortices from developing in water moving from the median fins and body surfaces towards the tail, which would allow the tail to push against less turbulence. The extremely small second dorsal and anal fins of mackerel sharks, swordfishes, and billfishes could function analogously.

Tunas add a corselet of large scales around the anterior region of maximum girth that may reduce drag and thus create more favorable water flow conditions posteriorly, where actual propulsion occurs. In the region of the caudal peduncle and tail, sharks, jacks, tunas, Swordfish, and billfishes have a single or multiple keels that extend laterally. In the tunas, a single peduncular keel is supplemented by a pair of smaller caudal keels that angle towards each other posteriorly (Fig. 18.7). Peduncular keels reduce drag as the narrow peduncle is swept through the water, whereas caudal keels may act as a nozzle that accelerates water moving across the tail, adding to its propulsive force (Collette 1978). Peduncular keels have evolved convergently in cetaceans, but the keels are oriented vertically, as would be expected from their mode of swimming.

Many pelagic fishes swim continuously. In the Bluefish, jacks, tunas, Swordfish, and billfishes, this constant activity is linked to a respiratory mode known as ram gill ventilation (see  Water as a respiratory environment). Instead of pumping water via a muscular buccal pump, pelagic fishes swim with their mouths open while water flows across the gill surfaces. Ram gill ventilation requires that a fish swim continually at speeds of at least 65 cm/s, which is easily attained by any but the smallest tunas at their cruising speed of 1 body length/s. The more common buccal pump mechanism accounts for 15% of the total 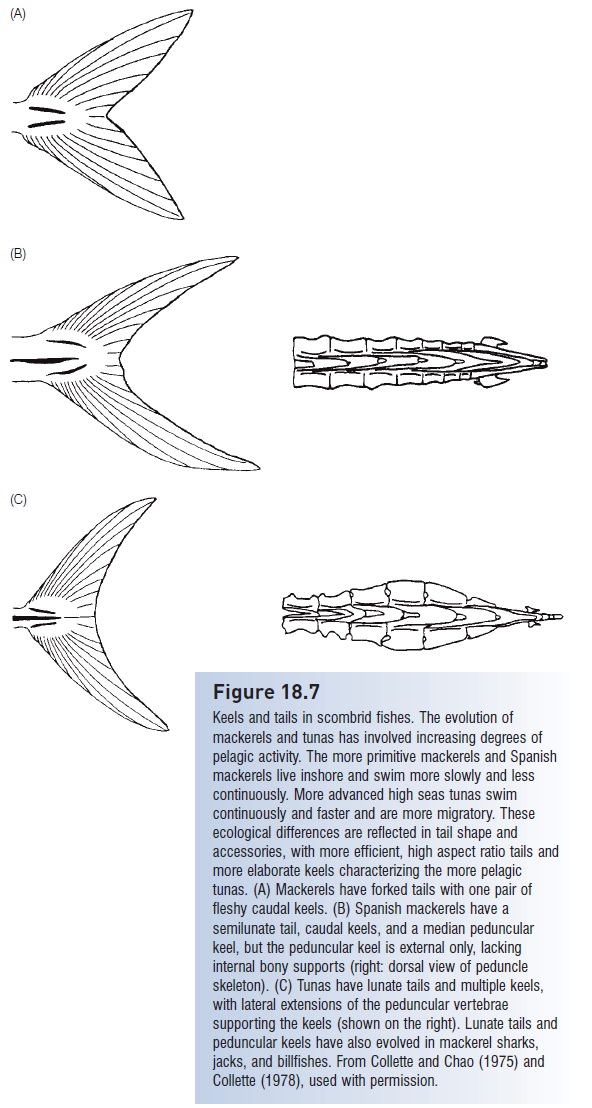 Keels and tails in scombrid fishes. The evolution of mackerels and tunas has involved increasing degrees of pelagic activity. The more primitive mackerels and Spanish mackerels live inshore and swim more slowly and less continuously. More advanced high seas tunas swim continuously and faster and are more migratory. These ecological differences are reflected in tail shape and accessories, with more efficient, high aspect ratio tails and more elaborate keels characterizing the more pelagic tunas. (A) Mackerels have forked tails with one pair of fleshy caudal keels. (B) Spanish mackerels have a semilunate tail, caudal keels, and a median peduncular keel, but the peduncular keel is external only, lacking internal bony supports (right: dorsal view of peduncle skeleton). (C) Tunas have  lunate tails and multiple keels, with lateral extensions of the peduncular vertebrae supporting the keels (shown on the right). Lunate tails and peduncular keels have also evolved in mackerel sharks, jacks, and billfishes. From Collette and Chao (1975) and Collette (1978), used with permission.

energy expended by a fish, suggesting that ram ventilation conserves energy. A trade-off arises because tunas and billfishes have minimal branchiostegal development and have lost the ability to pump water across their gills. They must therefore move continually to breathe. However, these fishes are negatively buoyant and must move to keep from sinking anyway (Roberts 1978).

The high levels of activity of pelagics are fueled by an efficient circulatory system. Pelagics have an enhanced capacity for supplying oxygen to their muscles. For example, menhadens, bluefish, and tunas have two to three times the hemoglobin concentration of typical inshore, sedentary forms; hemoglobin concentration in tunas is more like that of a homeothermic mammal than like a fish. Tunas have large hearts that account for 2% of body mass and have concomitantly large blood volumes. The uptake of oxygen and release of carbon dioxide at the gills in herrings and mackerels is facilitated by exceedingly thin lamellar walls (5–7 μm thick) and numerous lamellae ( >30/mm); comparable values for less active, inshore species are 10–25 μm and 15–25 lamellae/mm. The surface area of the gill lamellae relative to body weight is very high in mackerel sharks, menhadens, Bluefish, dolphinfishes, and tunas. The effi - ciency of the lamellae is enhanced by the fusion of adjacent lamellae and elaboration of the leading and trailing edges of the gill filaments. These modifications have occurred convergently in tunas, Swordfish, and billfishes but not in the less pelagic mackerels. Tunas remove more oxygen from the water as it passes over their gills than any other fish. This highly efficient oxygen uptake system is necessary to fuel their extremely high metabolic rates (Steen & Berg 1966; Collette 1978; Blaxter & Hunter 1982).