Additional examples of desert adaptations could be presented from almost any continent (except Antarctica), but some of the best studied desert fishes occur in the southwestern United States.

Additional examples of desert adaptations could be presented from almost any continent (except Antarctica), but some of the best studied desert fishes occur in the southwestern United States. The Basin and Range Province of North America contains four different deserts, the Great Basin, Mojave, Sonoran, and Chihuahuan deserts (Naiman & Soltz 1981). The province, which includes such seemingly inhospitable areas for fishes as Death Valley, Ash Meadows, Salt Creek, and Devil’s Hole, constitutes <10% of the total land area of North America. Although desert conditions have existed periodically in the region for approximately 70 million years, the southwestern deserts as they exist today are relatively young, no more than 12,000 years having passed since the last wetter, “pluvial” period when the area contained abundant, interconnected standing and running water. Despite their relative youth and small size, the southwestern deserts contain 182 native species, 149 of which are endemic to the basin and many of which are endemic to single locales (the area includes both US and Mexican endemics). Endemicity in the fishes of the desert southwest is the highest of any place in North America.

Two major types of desert habitat are occupied by fishes: (i) isolated pools and basins supplied by underground springs that have fairly regular flow; and (ii) intermittent marsh and arroyo habitats along flowing water courses that originate in wetter areas such as mountainous highlands and that flow into arid regions. The native fishes that occur there belong to five principal families and segregate according to fish size, habitat size, and environmental extremes. Small livebearers (Poeciliidae) and even smaller desert pupfishes of the family Cyprinodontidae live in the most extreme or isolated habitats such as intermittent streams and spring basins; these fishes include 20 desert-adapted species in the genus Cyprinodon. Small streams contain small minnows (Cyprinidae) that are <6 cm long; larger streams and small rivers support medium-sized suckers (Catostomidae) and trout (Salmonidae). The largest fishes, such as large suckers and the Colorado Pikeminnow (Ptychocheilus lucius, up to 2 m), live in large rivers. Body size is intimately tied to habitat size (Smith 1981b). The smallest pupfish, the Endangered 2 cm Devil’s Hole Pupfish, Cyprinodon diabolis, lives on an 18 m2 shelf in a spring basin in the smallest habitat of any known vertebrate (Fig. 18.11). In contrast, the Colorado Pikeminnow is the largest minnow in North America and lives in the area’s largest habitat, the Colorado River. 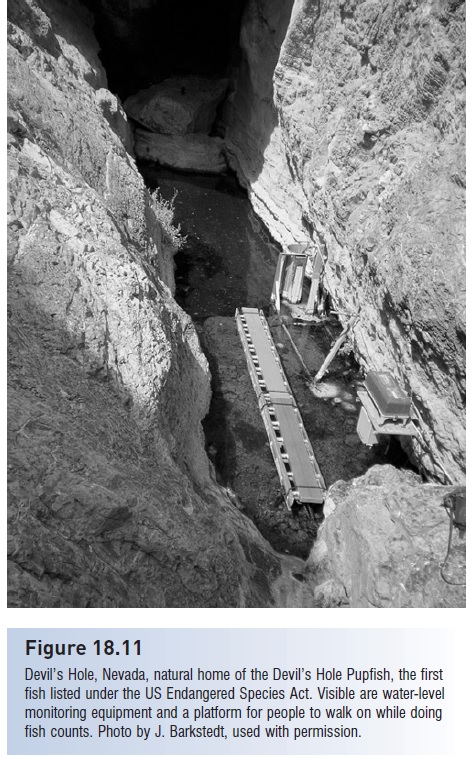 Devil’s Hole, Nevada, natural home of the Devil’s Hole Pupfish, the first fish listed under the US Endangered Species Act. Visible are water-level monitoring equipment and a platform for people to walk on while doing fish counts. Photo by J. Barkstedt, used with permission

The fishes in marshes and small streams experience the harshest conditions and show the strongest adaptations to desert existence. Desert pupfishes show extraordinary tolerances to environmental extremes. They can live in water with as little as 0.13 mg O2/L (0.13 ppm dissolved oxygen), which is a record for fishes that do not supplement gill respiration with some accessory breathing apparatus. Most fishes show stress at <5 ppm, depending on water temperature. Although these are freshwater fishes, some desert pupfishes can tolerate salinities over 100 ppt and as high as 140 ppt, three to four times that of sea water. Pupfishes experience water temperatures that vary from freezing in winter to 44°C in summer, the highest recorded for a habitat containing live fishes; the Cottonball Marsh Pupfish tolerates higher temperatures than any other known teleost (Feldmeth 1981). Many of the spring-dwelling pupfishes have lost their lateral lines and pelvic fins, which may be energy-saving responses in isolated habitats that lack predators.

Other taxa show physiological and behavioral adjustments to drought conditions, such as the Longfin Dace, Agosia chrysogaster, of the Sonoran Desert, adults of which move into moist algae during hot days and emerge during cooler nights to forage in only a few millimeters of water (Minckley & Barber 1971).

Although most emphasis is given to periods of low water in deserts, a major influence on stream- and river-dwelling fishes is the periodic oc currence of flash floods, when waters can change from low-flow, nearly stagnant conditions to raging torrents in a matter of seconds (Naiman 1981).Colorado River endemics (see Fig. 26.3), such as the Humpback Chub (Gila cypha), Bonytail Chub (G. elegans), and Razorback Sucker (Xyrauchen texanus), have anterior humps, flattened heads, keeled napes, cylindrical bodies, small scales, and elongate, narrow caudal peduncles that have been postulated to provide hydrodynamic stability during periods of high or turbulent flow, although the large humps could also be a convergent response to gape-limited predation by another endemic, the Colorado Pikeminnow (e.g., Portz & Tyus 2004).

High-flow adaptations are not restricted to large fishes. The Threatened 5 cm Gila Topminnow, Poeciliopsis occidentalis, has been extirpated through much of its range due to predation by introduced Mosquitofish, Gambusia affinis. However, Topminnows are able to coexist with Mosquitofish in streams that experience periodic flash floods because the Topminnows show instinctive behavioral adaptations to high discharge, including rapid movement to shoreline areas as waters rise, and proper orientation to strong currents. Mosquitofish, which evolved in southeastern regions that lack flash floods, behave inappropriately and are flushed out of rivers when floods occur (Meffe 1984).

Although the desert pupfishes and other fishes survive and reproduce in the extreme conditions of the desert southwest, these fishes do not exhibit several other traits common to many desert forms, such as estivation, air breathing, or diapausing eggs. Adaptations of the desert pupfishes are most likely extensions of capabilities possessed by ancestral lineages rather than being newly evolved. Cyprinodontids are small fishes that frequently inhabit estuaries where temperature, salinity, and oxygen availability vary widely. Adaptation to such estuarine conditions would constitute preadaptation for desert conditions. Given the superlatives accompanying the above descriptions of thermal, salinity, and oxygen tolerance in pupfishes, additional adaptation may have been unnecessary. Working against the evolution of desert-specific adaptations are the comparative youth of the region, as well as the periodic connection of desert water courses and pools with each other and with estuarine and riverine areas that serve as sources of new immigrants. Selection for desert adaptations would be relaxed during wetter periods, and dilution of such adaptations would also occur due to gene flow from source areas.

Given the limited extent, isolation, and small populations characteristic of desert habitats, it is not surprising that southwestern fishes are very sensitive to environmental degradation (Miller 1981; Soltz & Naiman 1981; Contreras-Balderas et al. 2002). A variety of activities have led to declines and extinctions, including pumping of springs and groundwater, pollution by humans and livestock, draining of marshes, damming of streams, introductions of exotic competitors and predators, and hybridization. Approximately 15 species and numerous localized populations of southwestern fishes are extinct. Desert species account for nearly two-thirds of the federally listed Endangered and Threatened fishes in North America. The International Union for the Conservation of Nature (IUCN 2004) lists 14 desert cyprinodontiform species as Critically Endangered. Some species have been described after they were exterminated (e.g., the aptly named La Trinidad Pupfish, C. inmemoriam, described on the basis of a single specimen collected before its single habitat dried up due to water extraction; Lozano-Vilano & Contreras-Balderas 1993). The fishes of this region have adapted well to the environmental challenges of extreme desert conditions, but nothing in their history allows them to handle the kinds of insults that often result from careless or callous humans (Pister 1981; Minckley & Deacon 1991; Rinne & Minckley 1991; Contreras-Balderas et al. 2002). 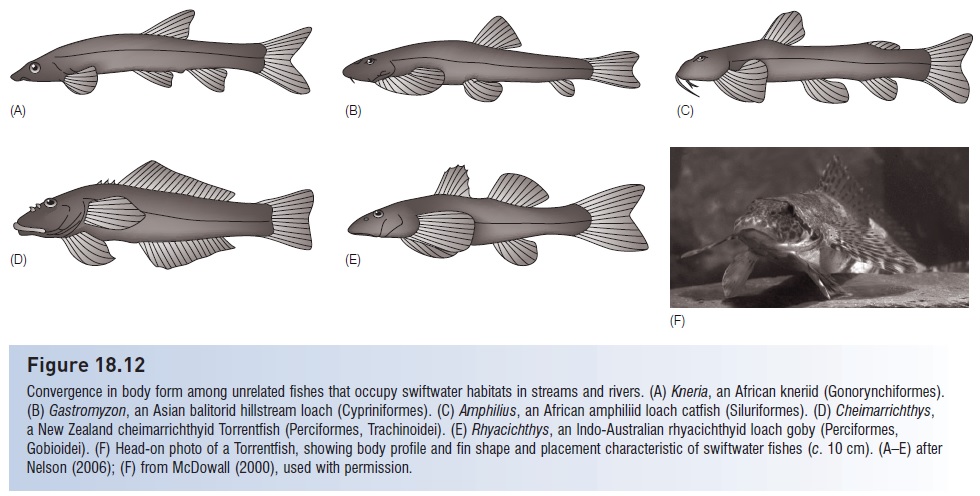