Deserts and other seasonally arid habitats - Diversity of Fishes

Deserts appear inhospitable for fishes. However, algae and many invertebrates capitalize on the periodic availability of water in arid regions.

Deserts and other seasonally arid habitats

Deserts appear inhospitable for fishes. However, algae and many invertebrates capitalize on the periodic availability of water in arid regions. It is not surprising then to find a small number of fishes capable of surviving under conditions of periodic dewatering in desert regions around the world, presenting dramatic examples of adaptation and convergent evolution.

Deserts are difficult to define because they differ in altitude, temperature range, amount of rainfall, and seasonality of water availability, among other traits. Many treatments define a desert as an area that receives less than 30 cm of rainfall annually. A more general definition is that a desert is an area where “biological potentialities are severely limited by lack of water” (Goodall 1976), a definition that stresses the common thread of water scarcity as the signifi - cant selection factor and can therefore apply to areas with seasonal droughts, such as swamplands that dry up periodically. For fishes, the disappearance of water is only the most extreme stage in a continuum of conditions that occur during dewatering. As water evaporates, temperatures generally rise, dissolved substances such as salts become more concentrated, oxygen tension drops, carbon dioxide increases, and competition and predation intensify. Desert fishes must therefore be tolerant of widely varying and extreme salinity, alkalinity, temperature, and depleted oxygen. They may also have to be able to outcompete other fishes and avoid predators despite physiological stress. Desert stream fishes also have to withstand periodic flash flooding. Desert-adapted fishes, not counting species that migrate to more permanent habitats when waters recede, often show three general adaptations: (i) an annual life history involving egg deposition in mud during the wet season, an egg resting period (diapause) during the dry season, death of the adults, and egg hatching when habitats are reinundated the next year; (ii)accessory respiratory structures for using atmospheric oxygen (lungs, gill and mouth chambers, cutaneous respiration); and (iii) in perennial species, estivation, where adults pass the dry season in some sort of resting state.

Deserts occur on all major continents and many of these deserts contain fishes. Africa has many habitats that dry up seasonally and that contain fishes with desert adaptations. Among the most successful groups in Africa are cyprinodontiform killifishes and rivulines, which are popular aquarium species. Many of these fishes (e.g., Fundulosoma, Notobranchius, Aphyosemion spp.) are annual, living for 8 months in mud holes, swamps, and puddles (Fig. 18.10). They mature after only 4–8 weeks, spawning daily and burying eggs as much as 15 cm deep in muddy bottoms, a remarkable feat for fishes that seldom exceed 5 cm long. The adults die and the eggs spend the dry season in a state of arrested development until the next rains come. Some eggs can remain in such a state of diapause for up to 5.5 years. An annual life history effectively maintains a permanent population in a temporary habitat (Wourms 1972; Simpson 1979). 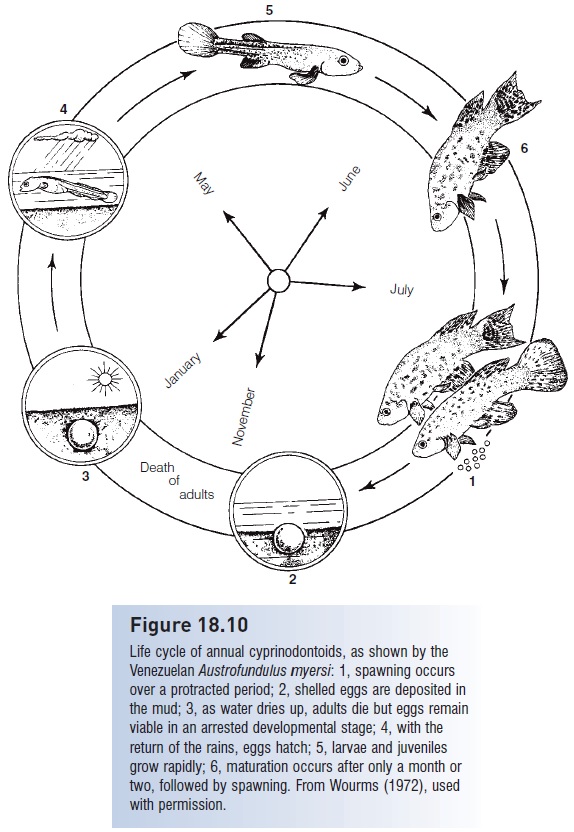 Life cycle of annual cyprinodontoids, as shown by the Venezuelan Austrofundulus myersi: 1, spawning occurs over a protracted period; 2, shelled eggs are deposited in the mud; 3, as water dries up, adults die but eggs remain viable in an arrested developmental stage; 4, with the return of the rains, eggs hatch; 5, larvae and juveniles grow rapidly; 6, maturation occurs after only a month or two, followed by spawning. From Wourms (1972), used with permission.

African and Asian clariid or walking catfishes are capable of leaving drying water bodies and moving across up to 200 m of moist grass in search of water. They will also bury themselves as deep as 3 m in sandy sediments as water levels drop. They can survive by employing aerial respiration via treelikesuprabranchial organs over the second and fourth gill arches, although they cannot survive if the sand dries up (Bruton 1979).

The African lungfishes (Protopteridae) are true estivators. During a drought, they burrow into mud, secrete a cocoon, and enter a torpid condition in dry mud until the next rains, an event for which they can wait 4 years (see  Subclass Dipnoi, Order Ceratodontiformes: the lungfishes). Many other fishes in African swamps are adapted to the deoxygenation that accompanies seasonal dry periods, using a variety of air-breathing mechanisms (see Table 5.1). Mochokid catfishes, killifishes, and Hepsetus odoe, the Pike Characin, are surface dwellers, taking advantage of higher oxygen tensions near the air–water interface. Lungfishes and bichirs use lungs, clariid catfishes have gill chamber organs, anabantids have labyrinth organs, snakeheads have pharyngeal diverticula, and featherfin knifefishes and phractolaemids have alveolar gas bladders.

In South America, drought resistance has evolved in parallel to the African examples. Many fishes of the Amazon region have evolved means of using atmospheric oxygen when drought or vegetative decay lower oxygen levels (Kramer et al. 1978). Surface swimmers, such as arawanas and some characids (pacus, Brycon), have vascularized lips. Modifications of the alimentary tract to absorb oxygen are common, including the mouth region of Electric Eels and swamp eels, air-filled stomachs in loricariid catfishes, a vascularized hindgut in callichthyid armored catfishes, and a vascularized gas bladder in lungfish, Arapaima, and erythrinid trahiras. As with the walking catfishes, South American species are reported to abandon drying pools and cross small stretches of wet vegetation or mud in an apparent search for new and wetter habitats (e.g., erythrinids such as Hoplias and Hoplerythrinus, callichthyid catfishes, some rivulines) (Lowe-McConnell 1987).

Conventional desert areas also exist in South America. The Chaco region of northwestern Paraguay receives less than 30 cm of water annually, with a normal 3-month winter drought period that can last as long as a year (Smith 1981b). During the annual drought, aquatic habitats become isolated and dry up. During the rainy season, these habitats are often repopulated by fishes from overflowing portions of the Paraguay River. The ichthyofauna of the Chaco consists of both drought-adapted and nonadapted species. Adaptations to drought include estivation in mud by juvenile and adult lungfish (Lepidosiren), accessory respiratory structures for using atmospheric oxygen (lungfishes; catfishes, Hoplosternum, Pterygoplicthys; characiforms, Hoplias), and annual life histories and diapausing eggs among cyprinodontiforms, which are also successful throughout much of tropical South America (e.g., Cynolebias,Rivulus, Austrofundulus). Localized extirpation

occurs annually in species that invade the Chaco region during the wet season but that lack the abilities to overcome drought conditions.

Australia is largely a desert continent. Its freshwater fish fauna is dominated by marine derivatives, such as river eels, plotosid catfishes, rainbowfishes, barramundi, temperate basses, grunters, pygmy perches, gobies, and sleepers. Several Australian fishes show distinct adaptations to periodic drought. The endemic, monotypic Salamanderfish Lepidogalaxias salamandroides occurs commonly in southwestern Australian habitats that dry up during the annual summer drought. As waters recede, the fish burrows into bottom sediments and surrounds itself with a thick mucus coat (Berra & Allen 1989; Pusey 1990). Two major problems faced by estivating fishes are water loss and a concomitant build-up of toxic nitrogenous wastes such as urea, which normally must be transported away with waterwasting urine. Salamanderfish conserve water by absorbing it from the surrounding soil until soil moisture content approaches zero. They avoid the production of nitrogenous wastes in part by metabolizing lipids rather than proteins; the endpoint of lipid metabolism is carbon dioxide, not nitrogen compounds (Pusey 1989).

Several species in the related family Galaxiidae in Australia and New Zealand occur in similar temporary habitats and may also estivate during dry periods. Some gobies and hardyhead silversides that live in desert springs in central Australia are exceptionally tolerant to high temperatures, high salinities, and low dissolved oxygen. The Desert Goby, Chlamydogobius eremius, typifi es desert-adapted species in its ability to survive an extreme range of conditions, including ionic concentrations ranging from distilled water to water more saline than sea water, temperatures between 5 and 40°C, and oxygen concentrations below 1 ppm. To avoid lethal conditions in thermal springs or high summer temperatures, it seeks cooler vertical or lateral portions of springs, buries itself in cooler silt, and even emerges from the water to capitalize on evaporative cooling and aerial respiration (Glover 1982).